Last week, I posted my thoughts on the 10mm urban terrain options offered by 4Ground miniatures. This week, I turn my attention to the equivalent product line from Blotz.

Blotz terrain is superficially similar to 4Ground's products: Both are made from laser-cut MDF; Both are made in the UK, and both require you, the consumer, to assemble them. How do they stack up? Read on to find out. 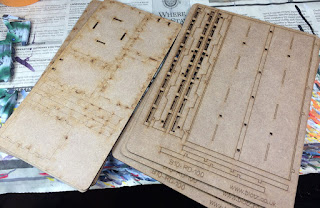 As with other MDF-based options, the Blotz terrain comes in pre-cut MDF sheets, which one must trim out prior to assembly. As you can see here, the most obvious difference between the Blotz terrain and its 4Ground competitor is that the Blotz pieces come unpainted, leaving it up to you, the consumer, to finish them for the table.

The Blotz sprues are easy enough to work with, but the tabs connecting them to the parts are much more substantial than the tiny little connections on the 4Ground terrain. It will take a bit of actual cutting to separate the parts you need. Not all the parts are labeled either, which can occasionally lead to some trial and error to figure out what goes in each place. That said, I probably wouldn't mention either as a problem, if I wasn't comparing this to 4Ground's stuff. 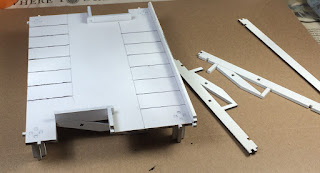 Assembly is quick, and pretty simple. Basic PVA glue will hold MDF together, and most of the Blotz pieces fit together very nicely, and often only fit one way, reducing the rate of build mistakes. In this picture, you can see part of the Blotz parking structure under construction. I should note that I added the lines marking out parking spaces. The piece came completely blank. 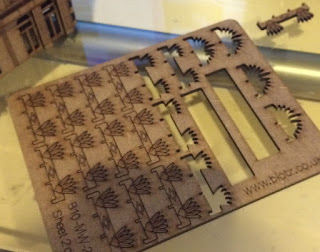 The one building I have assembled came with a separate sprue of detail pieces, which add some nice character to the building, but they are not nearly as numerous as the details from the 4Ground equivalent. That does lead to slightly less detail overall, but not as much as you might think. Some of the detail 4Ground provides as separate parts, such as windows and door frames, are built into the Blotz wall parts. Integrating those details is possible because they are not painted, and therefore do not have to be part of a separate sprue. The one ding I will give Blotz is that they only seem to use one thickness of material, which means some of the add-on details a re a bit oversized and cartoonish looking, when viewed  up close. 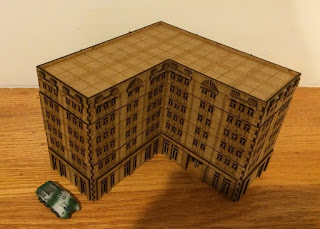 Blotz buildings come in multiple tiers, permitting extra layers to be added in for taller structures. This adds quite a bit of customizability, but I have to say that it is tricky to align each tier perfectly, leading to some gaps. Next time, I might glue the layers together as I go, and accept the loss of future customization. 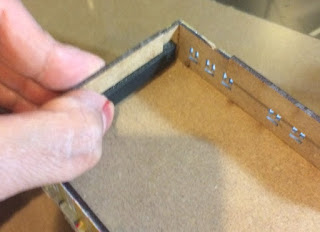 Another quibble I have with the Blotz building is that it does not include an inner layer behind the windows. That means that light can shine through the building, making it look much less realistic. For the building shown here, I grabbed some black foam board that I had laying about and cut pieces that I could fit into the interior to darken the whole thing. The process did not take especially long, but it was extra work. (For the record, each row of windows can be nicely covered with a strip 5/8 of an inch wide - about 16mm.) 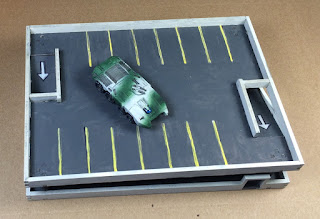 Once complete, the Blotz terrain does look quite nice, and fits in well on the battlefield. I will have to get moving to arrange for more of it to be completed in time for my upcoming tournament.

As with last week's terrain review, I am going to reserve my final ratings until the end of the series.