On February 6th, we held our first local DropZone Commander tournament at CaptainCon 2016, in Warwick, RI. Even with a couple of last-minute  no-shows, we were able to muster five players (6 with me as organizer). I am prepared to call it a success, and look forward to the next one! 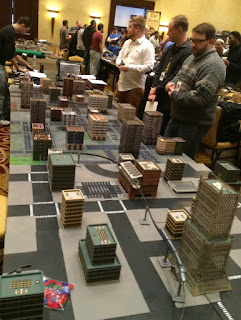 This was my second tournament, after Gencon, and the first I have organized myself. As I posted during the past weeks, I dedicated a great deal of time to preparing terrain for the event. The end result was four tables ready to go right at the start, with enough extra materials for at least one more, should the players materialize. 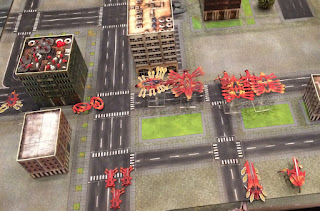 We had an unusual mix of armies at the event. PHR and resistance had the best representation, with two players each. One of my fellow organizers brought his UCM along, and my Shaltari filled in as a sixth army, to bring us up to an even number of competitors. 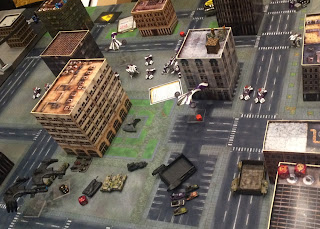 The CaptainCon organizers were very supportive, and provided us with ample space for an event of this size. I have high hopes that we will be able to repeat it next year, with even more players. If we can hit 8 players, or more, the level of competition will be that much better! 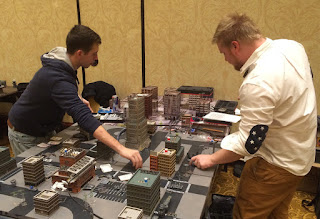 At the end of the event, the top three finishers were:

As you can see, it was a very close-run thing. The top three players were only separated by one tournament point, and a handful of kill points.
Posted by klarg1 at 8:17 PM