How do you come up with a good paint scheme? Sometimes you can pick a set of colors that work well together in the abstract, and fit them onto a miniature easily. Other times, you can decide to follow a pre-generated paint scheme from a canon game universe, or by borrowing from another painter's work. Once in a while, inspiration strikes and a great concept just pops into your head. 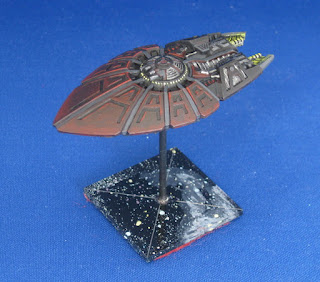 All of those are useful approaches, and I have certainly made use of all of them at one time or another. I have also blocked out some paint patterns on paper using colored pens, pencils, or even crayons. (Yes, I know that there are digital tools for doing this, but I haven't tried them at all.) Ultimately, no matter how many miniatures I paint, sometimes I just have to pull out a brush and try out a paint scheme with a real model and real paint to work out what I want.

This past week, I decided to take a break from my Dindrenzi fleet and paint up a Directorate ship for Firestorm Armada. It gave me a chance to expand my painted fleets, while getting away from the monotonous process of painting and highlighting all those blocky  green hulls.


I opened up a fresh blister pack of Directorate Nemesis class destroyers and got down to cleaning and preparing the two ships for use. Once they were all cleaned up and primed, I had to select a paint scheme, not just for these two destroyers, but, hopefully, one that could extend across an entire fleet of Directorate ships some day.

I did not have a strong concept in mind, but the Directorate fleet does have a few common, strong features. The first, and most obvious, is the set of large armor plates that ring the forward half to two thirds of the ship. Second is a dome in the center of the ship, and, finally, there is an aft section filled with machinery and engine parts. 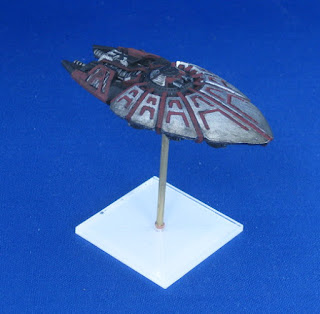 I quickly found that I needed a third major color. I needed to be able to distinguish the engines and machinery from both the armor plating and the other structural hull elements. I wanted to keep the metallic colors for the engine machinery, so I went off in search of a new accent color for the armor. My next try came closer to completion than the first. 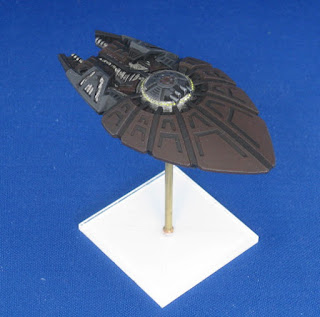 At this stage I was pretty happy with the general look, but I thought it might look better if I toned down the bright steel color on the central dome and further darkened the structure of the rear hull. A little experimentation also suggested that a lighter color might look good on the 'ribs' that separate the armor plating. 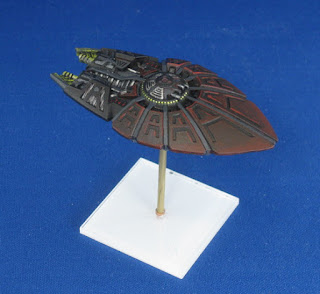 Having run out of destroyers, I circled back and started to build version three by repainting the steel and black ship shown above. Since I had two ships to work with, and I was almost happy with version two, I figured I could experiment and compare the two side by side. 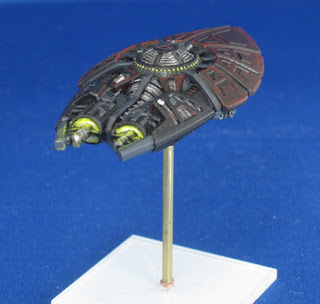 I am pretty happy with the final(?) result. I have gone so far as to paint in the windows and engines. If I don't decide to make some more refinements, I can circle around and paint the second one to match. 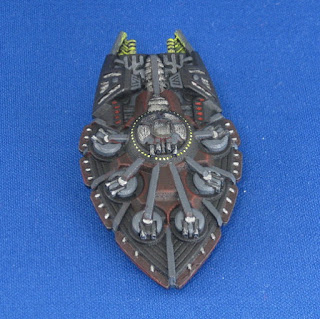 One of these days, I'll have to try painting a dreadnought.
Posted by klarg1 at 7:03 PM