I'm not quite sure why, but I have a distinct fondness for odd-ball Battlemech configurations. My last installment in this series detailed, probably, the single least popular Atlas variant in the game. This one deals with a 'mech no less unusual, although it is probably a bit more useful in game terms. 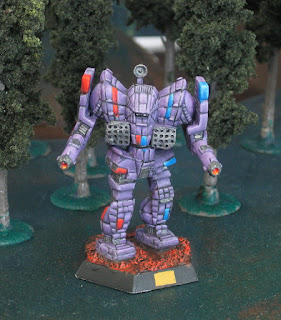 Shown above is the AWS-8T Awesome. The 8T swaps out the traditional particle cannons of the classic 8Q for a set of missile racks and large lasers. Wacky to be sure, but really not a bad assault 'mech for the Succession Wars era.

Read on to find out how I built it.


I started out with the current, standard Awesome sculpt from Ironwind Metals. It starts out with four cannons as its armament. On the one hand, the two mounted in the torso had to go, on the other hand, it does provide two pre-sculpted energy cannons to represent the arm-mounted lasers. All I had to do was find a way to swap the torso cannons for some missile launchers. 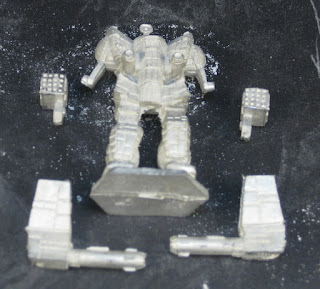 After a bit of searching around and a few loose test-fits, I hit upon the shoulder mounted LRM racks from the Mad Cat omnimech. This is one case where I am actually happy that the Mad Cat's art nearly always shows 15 tubes in the launchers, rather than the correct 20. I believe these are the launchers from the current sculpt, not the older one from the 90's, but it couldn't hurt to check the fit before trying to reproduce this build. 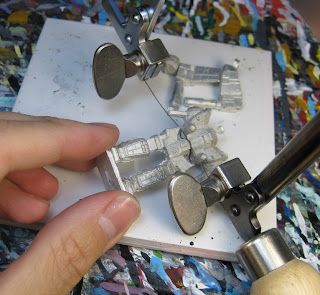 With launchers in hand, I started the tedious process of cutting away the old weapons. I started out by cutting the 'mech in half, through the waist. That gave me much easier access to the guns so I could cut them off, and also allowed me to twist the 'mech's hip joint to give it a little more character. 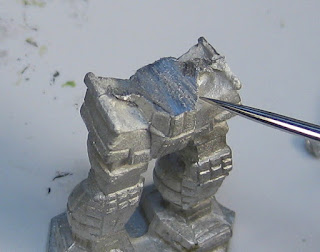 It turns out that this Awesome also came with a considerable amount of flash between the guns and the hips, which was much easier to remove after slicing the poor thing in half. 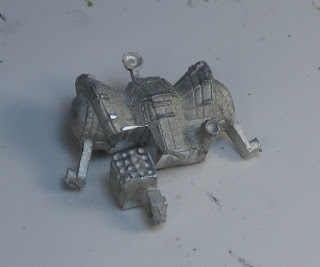 I broke several small saw blades working my way through the thick metal of the torso, but I eventually managed to remove the guns pretty cleanly. After some careful dry fitting, and a lot of file work, I managed to get a nice fit between the missile racks and the torso. As I suspected with my initial fitting, the Mad Cat launchers fit the Awesome almost perfectly. 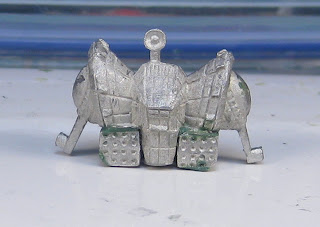 I did say almost perfectly. I still had to cut away the old mounting post and sand off all of the details on the sides that faced the Awesome's torso. Note that I have mounted these launchers rotated 90 degrees from their intended orientation. The side that would point up on the Mad Cat is now facing inward, toward the Awesome's waist. I also swapped the launchers left to right. (The little sensor light, or whatever, that takes the place of the 16th missile tube in the grid has been filed off along with the rest of the outside beveled corner.)

You may notice a little bit of putty in the picture above, I wound up over-sanding a few areas, and had to correct it with some green stuff. Don't be like me! Take your time and do it right the first time! 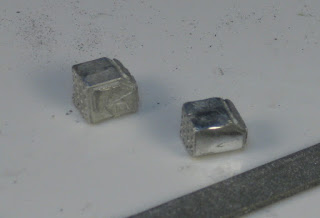 I left the detail plates on the backs of the launchers, but I cut grooves into them to make it look like a grill on the back of the launchers. I also took the liberty of filing down the lower, outside corner of each launcher to bevel the edge along the hip line. 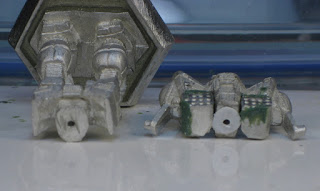 Once all that was set, I ran into one last fit issue: The Awesome's hips slope upwards towards the launchers, and actually reach quite high at the outside edges. Even after filing down the missile racks, I needed to add in a plastic hip joint to raise the upper torso above the hips, especially if I wanted to rotate the torso at all. I cut a little disc out of thin sheet styrene and inserted it into the joint before gluing the thing together. I ran a pin through the waist to join the two big pieces together, and declared success. 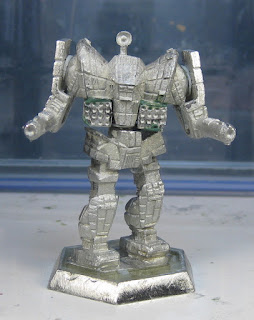 As you can see, I did not bother with any really fancy poses on this build. Most of the interesting work lay in the variant conversion. I did attach the arms in a slightly splayed position, rather than facing squarely towards the front of the 'mech. As I have mentioned in the past, squared off postures tend to look static and uninteresting. Mounting things a little bit off the true right angles can add a lot of life to the pose, even with a mechanical subject. 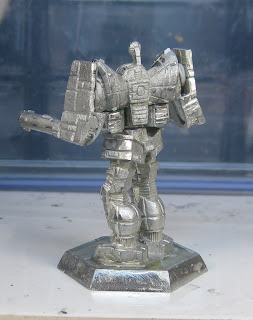 That's it for this build. I still have a bit of paint work to do, and I need to finish the base, but that sums up the construction work. Until next time...