In my last installment, I went through the steps I used to base coat my converted Battletech Nova miniature. I also showed a little bit of the NMM work I applied to the model. This post will cover the finishing work I put into the project, along with some of the problems I ran into along the way.

With all of the paneling blocked in with green and yellow, and with the metal parts shaded into a more or less final NMM state, I tackled the project of shading all of the armor panels. This is, without a doubt, the longest and most labor intensive stage of most Battletech jobs. If nothing else, Battlemechs tend to be painted in relatively few colors compared to a fantasy character or similar model, leading to a lot time spent shading one panel after another with the same set of colors. 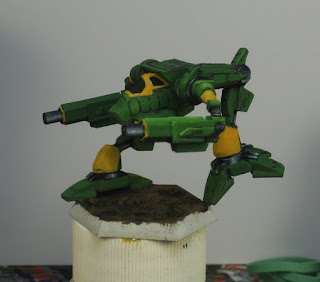 On the positive side, you can pretty much just mix up one set of shade colors and go to town for hours working on one or two models. In this case, I continued with the Reaper Warm Green triad, blending from Pine Green up through Pale Green. The very brightest highlights also include a touch of white to lighten the color even further. 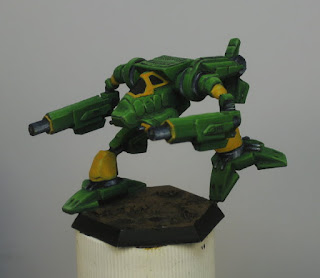 As with the initial paneling, I proceeded from left to right across the 'mech, working on just one or two panels at a time. The picture above shows the model with most of the armor plates already shaded. Not long after it was taken, I decided it was time to hit the model with a light layer of Dullcote to set the paint before I moved on. At this stage in the game, I thought things were going pretty well, and the end was in sight. Little did I know... After the varnish dried, it was immediately apparent that something was wrong. All paints look a little different behind varnish than they do fresh, but it turns out that leaf green reacts much more strongly than most paints. In particular, it reacted much more than the other greens in the triad. All those blends needed some serious damage control!

The darkened green didn't look bad, it just needed to be blended into the highlights to restore a reasonably smooth gradient. Since I knew I couldn't trust Leaf Green to hold up when I sealed the miniature again, I started carefully blending the colors together with very thin glazes of Pale Green. Each thin layer lightened the target area a little bit, allowing me to slowly restore the paint. I made sure to add in more Dullcote from time to time so I could check how the blends would look after sealing at each stage. 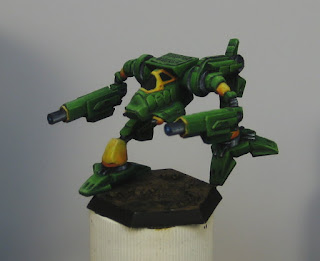 Over all, I was happy with the restored result too, but the process added more than an hour of work to the time elapsed for this project. I mentioned in my first installment that this was for a competition. At the time of the "Dullcote Debacle", I was about one and a half days from the submission deadline, which was not a lot of time, given how little free time I had to spend painting. Still, it was late and I had the ground work laid. I decided to call it a night and get some rest before tackling the detail work in the morning. 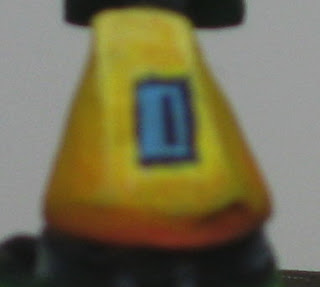 Freshly rested, I started out by painting a Jade Falcon insignia on the 'mech's right leg and left arm. Some Battletech logos are incredibly intricate, but the Falcons use a pretty simple blue and green design. I made sure to place each one against a yellow background to help the Teal Turkey show up against the armor. 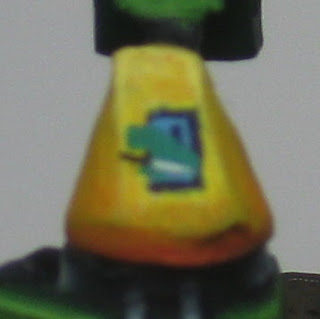 I used an old pot of Games Workshop Jade Green for the falcon itself. I apologize for the poor quality of the close up shots. It isn't easy to get my camera to focus on such a specific and tiny detail on the miniature. Hopefully, you can get the idea of what it looks like from what's there.

After adding the Jade Falcon logos, I went on to add some identification numbers and a Delta Galaxy insignia using the same basic techniques.

At this stage I though things were going swimmingly! I knew I wanted to add some paint chips and weathering to the paint, but I had all day to finish up, and it was the weekend. I loaded the miniature up onto my spray platform and got ready to seal the paint one more time before weathering when...

KABOOM! I managed to drop the thing four feet onto a hard tile floor on the way to a ventilated space do do the sealing. I was pretty stunned by that turn of events, so I went out to take a walk and clear my head before assessing the damage. By the time I had the presence of mind to snap a photo, I had the legs re-attached, and the repairs underway. 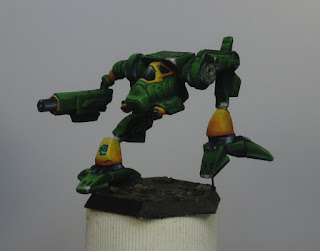 You may notice the various places where I had to add touches of brush-on primer as the first step in repairing the chipped paint. You can also see that the left leg is now mounted in a slightly different position than it was in the original build: 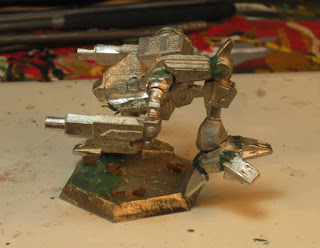 By the time I even had it back to this stage, I was only a few hours from the submission deadline, and I had a ton of work to do both to repair, and then finish the paint job.

Thankfully, I was able to bend, splice and glue everything back together. The only really lasting damage is that the left corner of the boxy structure above the 'mech's cockpit has been crushed flat. If you look closely, you can see that it is no longer a sharp corner. Aside from that, I managed to get back to where I was pre-disaster with around two hours left for intentional distress and weathering. 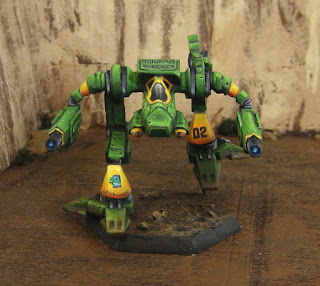 I do not have any photos taken of the weathering process I used. I will try to post a basic tutorial on the method at a later date. In a nutshell, what I did was apply a random pattern of small reddish spots to the 'mech's paint. I focused them on hard edges and other places that seemed likely to see a lot of wear in the "real world". It can be helpful to take a look at real world heavy equipment to get ideas for how to place this kind of paint damage. 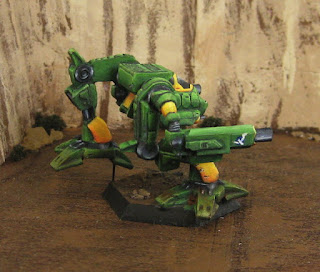 Once I had a satisfactory pattern of splotches, I applied a razor thin line of very light green or yellow paint (matching it to the background color) along the bottom edge of the spot. Doing that give the rust spot the illusion of depth by making it look like there is a thin rim reflecting light along the border of the paint chip 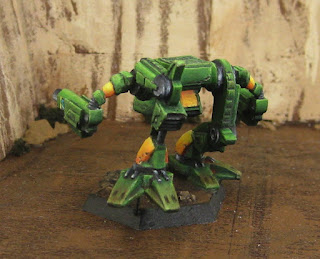 I actually managed to wrap up my weathering, seal the miniature and snap a few photos with over half an hour to spare before the submission deadline! :) 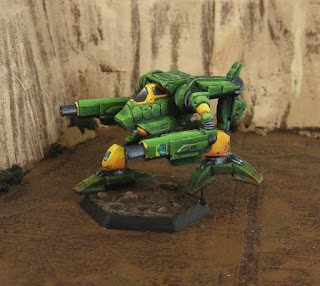 In the interests of fairness, I should mention that the Battletech forum administrator running the contest was very understanding, and would have given me a few hours extension, if I needed it, but I was very happy to get my submission in on time without that.

Altogether, I am pretty happy with the results, and I really enjoyed the contest. It gave me a motivating goal and a deadline to push myself to produce the best work I could. I look forward to the next one!

Read part one of this article: http://blindmetalminis.blogspot.com/2012/08/nova-all-painted-up-and-ready-to-go.html
Posted by klarg1 at 8:52 AM