Back in January I posted a conversion build for a Battletech Nova Omnimech miniature. In fact, it was the first in my ongoing 'Battletech Conversions' series. After the build, I left the project languishing on a shelf for months, waiting for inspiration to strike. When I heard about a new Iron Painter contest on the Battletech discussion forums, I decided to dust off my creation and give it a brand new paint job. 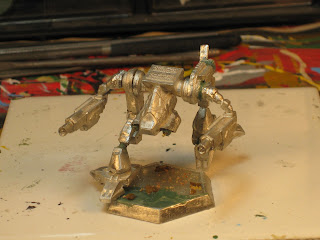 The paint scheme I chose is the canon Jade Falcon "Delta Galaxy" paint scheme from the Battletech Universe. It's a strong scheme based around yellow and green, and I've been meaning to expand my collection of Clan miniatures for some time. Now that I have a prototype, I'm hoping that I can find the time to fill in the rest of a star around this model. 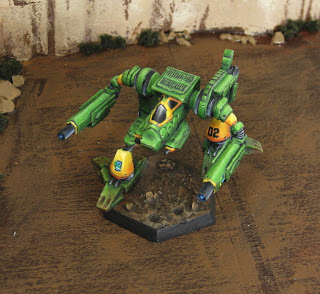 Of course, if you're not a Battletech fan, you can just ignore all that and read on to find part one of my painting odyssey.

Following my usual approach to armored units, I started out by giving the whole 'mech a base coat of dark green, in this case, Reaper Master Series (RMS) Pine Green mixed with a small amount of RMS Burgundy Wine. That is still the color showing through in the deepest recesses and panel lines in the finished model. 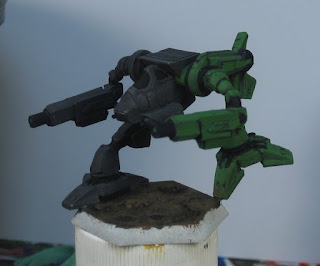 With the darkest under coat in place, I started the process of paneling the green portions of the 'mech using RMS Leaf Green (also taken from the Reaper "Warm Greens" Triad). While I was at it, I also gave all of the exposed metallic areas a coat of RMS Blue Liner to cover up the green and prepare for the next step. 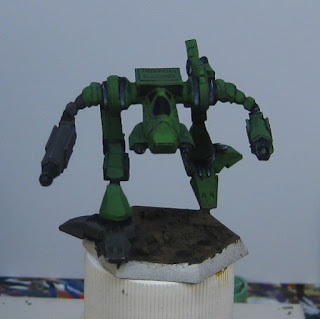 As I progressed across the miniature, I took occasional breaks from the rather tedious work of panel-painting to start in on the metalwork on the 'mech's joints and weapons. I decided to continue my Summer foray into the wilds of non-metallic metals by making this piece my very first NMM Battlemech. I'm not sure that was the wisest choice for a competition piece, but practice makes perfect, and you've gotta start somewhere.

In my one concession to ease of painting and simplicity, I stuck with the basic blue-grey steel recipe that I've been following in my other NMM projects. When I get around to another fantasy mini, I expect to start experimenting with other styles or metals. The next step was to put down a layer of white wherever I wanted the 'mech's yellow highlights to go. I wanted to make sure that the yellow paint would cover easily, and produce a clear, yellow color.

Naturally, the next logical step was the yellow base coat itself... 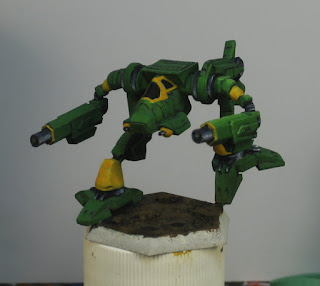 Tune in next time for the exciting conclusion of this epic tale, including tragedy betrayal, and shading!