Battletech Conversions - first in a series

I've been playing Battletech for many, many years. In recent times, I've been increasingly customizing miniatures with alternate poses, or with conversion parts to represent variant units. This short build  outlines the work I did to both re-pose and re-configure one of the Nova Omnimech models from Ironwind Metals. 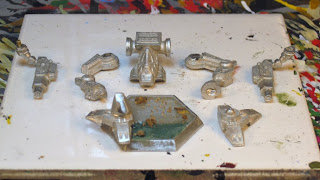 I started with a lot of parts, and my first move was to start cutting pieces apart to make more. As you can see in the photo, I had already sliced the right leg into three pieces before I started taking pictures. In this shot, the right ankle has already been glued down onto the matching foot, and the whole assemblage has been attached to an Ironwind hex base.

The reasoning behind the cuts was that I wanted to change the model from a static, standing pose to a full speed running posture. After extensively studying the Nova's leg, I was rather stunned to realize that the 'mech can barely extend its knee joints beyond their basic ninety degree standing position. That limitation makes envisioning the thing's gait a bit of a challenge. My best guess for how to make it work was to interpolate an additional ankle joint above the foot that might allow the 'mech to plant its foot in front of its torso in a very odd loping stride. That made job one cutting apart the leg, and bending that hypothetical extra joint. 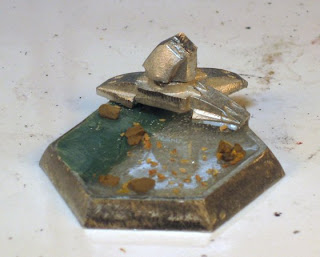 With that decision made, and a plan in my head, I quickly began sanding and assembling the rest of the right leg. I made sure to insert a steel pin into each joint to reinforce the connection. The right leg had to be strong enough to support the complete weight of the model. 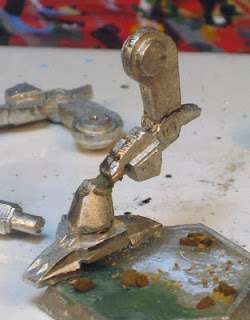 The 'mech's torso had a very large attachment surface, and the parts fit together very nicely, so I went ahead and prepared the body in place before tackling the other leg. Before gluing the torso into position, I used my Dremel to carve two round cavities into the weapon pods located below the cockpit. 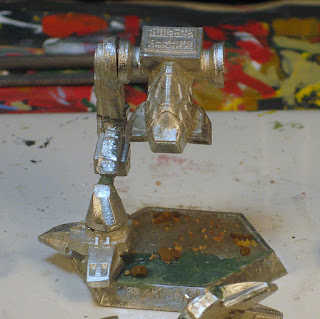 Once the body was in place, I made two small spheres out of green stuff and set them aside to cure. I made them large enough to fit inside the two cavities carved into the torso omni pods. Eventually, I glued those spheres into the torso sockets to form ball turrets for the 'mech's anti-missile systems. 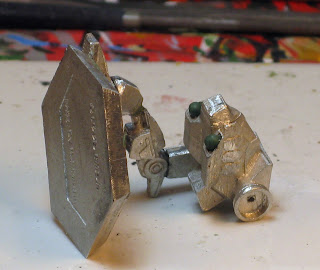 While the ball turrets were curing, I began work on the left leg. I planned to make this leg the trailing leg in the Nova's stride, so I began by re-posing the foot so the toes were trailing in a relaxed position, rather than splayed flat to carry the 'mech's weight. 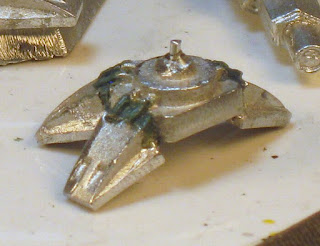 To do that, I sliced part way through the base of each of the three toes and gently bent them downwards. I then went back and filled the newly opened gap between each toe and the foot with putty. Later, when that putty had cured, I re-sculpted the details of the hinges that connect the toe to the foot, replacing the details that were damaged when I cut into the foot. 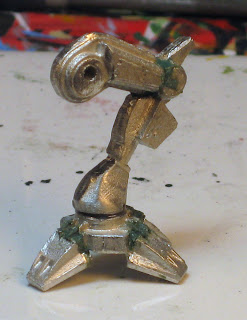 The rest of the left leg went together pretty smoothly. I did try to bend the knee very slightly forward, but, in the end, I probably could have left it alone and saved myself the trouble.

I bought new arms for the 'mech to replace the multi-barrel arms that came with the standard Nova-H arms that came with the kit. Unfortunately, the new arms did not match the mounting point sculpted into the 'mech's combination hip and shoulder. I took some brass tubing which happened to fit the socket already molded into the arms, and used them to fashion thick pins to connect the arms to the rest of the miniature. Once I drilled out sockets in the leg parts, they fit right in. 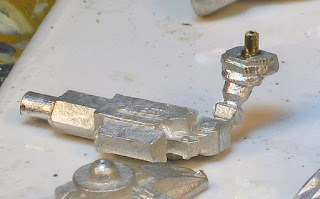 The last step needed to finish the model was to drill out the center of each of the ball turrets and fit them with brass gun barrels for the AMS. 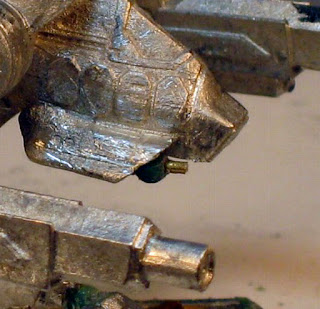 After that, the whole thing was ready for paint! 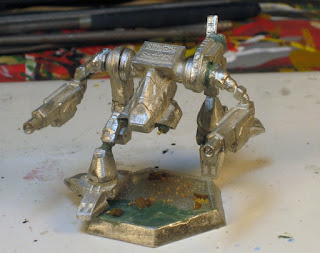 I expect that I will have several more 'mech conversions to post in the future.