I have (finally) written up my thoughts on Firestorm Armada as a review of the game. This is my first full review, so I am still working out the format - we'll see how it goes! 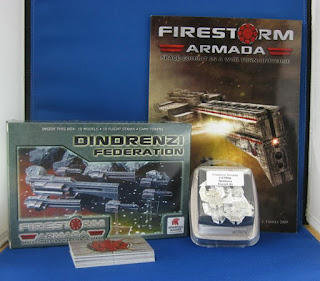 Synopsis
Firestorm Armada is the second release by Spartan Games. It extends Spartan's excellent line of miniatures and their particular style of naval combat into the realm of Space Opera. The initial release provided four different fleets to choose them, divided into the Alliance of Kurak set against the Zenian League, as they battle for control of Fathom's Reach. Since that time, they have added two more core races and a few smaller support fleets which you can mix into your forces.

Firestorm Armada is aptly named, as the game seems to be geared towards substantial fleets ranging from around 10-20 individual ships, plus assorted light fighter elements, referred to as "Wings". Given the scale of both the games and the models, it is natural to draw comparisons to Games Workshop's Battlefleet Gothic, and, perhaps, to Mongoose Publishing's A Call to Arms, but I would say that the overall feel of FA is quite different from both, and it stands very well on its own.

Read on for the detailed review...


Game Play
I have played two games of Firestorm Armada so far, and I am looking forward to a third. Force construction follows a standard point based system. Each fleet is organized into squadrons of 1-4 ships. The size and cost of each squadron is restricted by the type(s) of ships comprising the squadron. Each fleet's overall composition is subject to further percentage based restrictions of how many ships it may include for each size or class. For example, my Dindrenzi fleet can spend up to 60% of its points on medium class ships, including cruisers, gunships and destroyers, but it can only spend up to 30% of its points on carriers or 40% on small ships. The starter box for each race comes with a ten ship, 500 point fleet to build around. My sense is that the game will play better at around 1000 points with a few more units on the table. For reference, Dreadnoughts, the largest ships released to date weigh in at 270 points while the smallest escorts and frigates only cost about 50-60 points for a group of three.

Everything in FA is resolved using fist fulls of six-sided dice. The effectiveness of most weapons and other systems is determined by counting the number of "successes" generated by rolling a predetermined number of dice and comparing that number to a desired target number. The game also employes an "exploding dice" mechanic, so, in most circumstances, a die roll of six will both count as a double success and allow you to roll an additional die. This contributes to a looser and more cinematic feel to the game, but may not appeal to gamers who like a little less chaos and randomness in their games.

Game play follows an alternating unit activation scheme. Players take turns activating their squadrons one at a time. During each activation, a squadron both moves and shoots. Combat is not simultaneous, so it is possible to destroy the enemy before he can shoot back. An interesting point is that the player who wins initiative for each turn always has the first activation. That is great for getting to shoot the enemy first, but not as great, if you would really like the enemy to move closer and shoot at long range before you close in and pound him into space dust. I am very fond of that trade off as a way to mitigate the advantages of getting to go first.

Spartan also includes an optional, but encouraged, card mechanic in their games. The stated purpose of the cards is to provide a "fog of war" which prevents your opponent from knowing all of your capabilities at any given time, and I would say that it does a good job at fulfilling that desire. If you are using the optional STAR cards for the game, each player draws a hand of cards at the start of the game and can play those cards to boost their fleet's abilities or foil their opponent's plans as the game progresses. A player's hand is replenished at the start of each turn, so there is a strong incentive to play any cards, if possible. I was initially apprehensive about this mechanic. I was concerned that it might overshadow the tactical play of the core game, but I am pleased to say that the abilities granted by the STAR deck, while useful, are not over powering. Like the exploding die mechanic, the STAR cards do increase the level of randomness in the game, which will appeal to some players and not others.

The game includes rules for fighter wings, boarding, ramming, mines and many other options. In general the rules are very nicely engineered to be quick to play while still providing a varied and rich tactical feel to the game. Based on my experience, and on some reading on the net, it looks like most games are resolved in four or five turns. My two games both took three or four hours to resolve, but a good portion of that was figuring out the rules and discussing first impressions with my opponent and with interested onlookers.

Miniatures (sculpt quality, casting, assembly)
Once assembled, the Firestorm Armada miniatures have great visual impact. The big capital ships get quite large. The Battleship I've been working on is over six inches long, and the dreadnought models are even more massive. Properly assembled and painted up, Firestorm Armada fleets should look very impressive maneuvering across a blackened table top. I, personally, love many of the designs, but that is, of course, purely subjective. 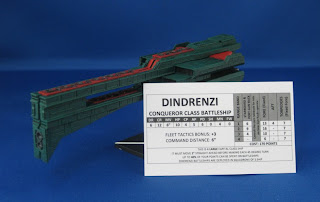 Spartan's models are beautifully sculpted and very detailed. They are cast in a light grey resin that faithfully holds very sharp details. Resin is not the friendliest material to work with, but it does produce beautiful results. Spartan's cast quality looks quite good. Most of the models come with some flash, and a few have substantial pour stubs still attached, but, so far, I haven't seen anything which couldn't be readily cleaned up with a hobby knife and some sanding. Spartan has done an excellent job placing pour stubs and mold lines where they do not destroy valuable details.

I haven't gotten a look at one of the fleet boxes yet, but individual models come packaged in a large blister package along with a clear acrylic flight stand, a small rules and statistics card for the model, and some foam padding to keep the resin from bumping around and getting damaged. Mine were all shipped individually by mail, and arrived in factory-perfect condition.

My Dindrenzi Battleship was a bear to assemble, but the three other ships I bought are either very easy, or only one piece. My friend and play-test partner has purchased a substantial Aquan fleet and his models are also very very simple to assemble with primarily one and two piece models. The newer Dreadnought models look more complex, but, given how much bigger and more intricate they are, I do not think there is anything to criticize there.

Components (packaging, rule books, counters, tokens, boards, etc.)
Firestorm does not come in a box. The rulebook, miniatures, counters and STAR deck are all sold separately. To get started, you will need the core rulebook, a set of the counters and templates, and the boxed starter fleet for your chosen race. At retail prices, that combination adds up to $100.97. A deck of STAR cards will set you back another $8.99 leading to an initial buy-in price of about $110, which is very reasonable for a miniatures game, and will give you a pretty good basis for play. To sweeten the deal, Spartan provides print-and-cut-out images of three of the starter fleets (Terran, Dindrenzi, and Directorate) so players can try out the game without any miniatures, if they want. 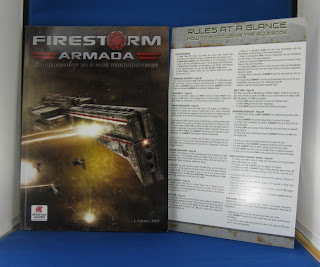 The rulebook is 96 full-color pages and perfect bound. It is filled with pictures of beautifully painted studio miniatures and some of the best rules diagrams I have yet encountered in a war game. Having said that, I must be honest: While the rule set is great, the rules themselves are not very well written or organized. The rules are structured into logical sections for movement, weapons fire, fighters, boarding, etc, but each section meanders about, inserting rules and critical facts in casual asides, or random explanatory text. I had to read several sections multiple times before I understood them properly. There are also a number of unresolved ambiguities, which can be resolved by a careful perusal of the Spartan forums, but which are not addressed in the book. For example: One possible critical hit result is "broadside damaged", which "damages" the strongest broadside battery on the affected ship. The rules go on to explain how to repair the damage to the ship's weapons, but I can't find an entry in the rulebook that says what "damaged" means (damage reduced, penalty to hit, weapon disabled, etc.). It's possible that the answer is buried some place where I can't find it, or that it simply isn't in the book. I find it frustrating that the text can be so haphazard while the diagrams are so clear and well designed.

The counters and templates are sold in a single package of punch-out sheets. The sheets are a heavy weight plasticized paper stock and separate very easily. They are all in full color and look nice. One knock on the counters is that some of them are clearly labeled with what they indicate, such as the "Raging Fire" token, but others just have a bit of nice art with no explanation. It's not too hard to figure out what they are meant to be, but better consistency would be nice. There is room here for somebody to provide nicer plastic or heavy cardboard board game style counters, but these should hold up fairly well. There are a lot of them, so I advise investing in some counter trays to keep track of them all. 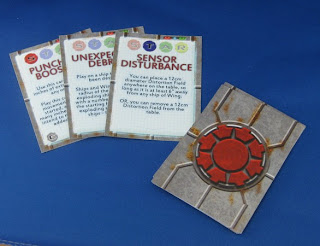 The STAR card deck is a 52 card deck of cards with the rules for each card printed on its face. The cards look like they are standard playing card size to me, although I have not measured them. They have sharp, rather than rounded, corners, so I have placed mine in card sleeves to keep them looking crisp and new longer, but there is no real need for that kind of treatment. They look to be of good quality.

Conclusion
I am still a Firestorm Armada novice, but I am having fun, and I am eager to fill out my fleet. I am trying to keep a little discipline and paint what I have before I go out and load up on another ten or fifteen ships, or even a second fleet. The rules are interesting and produce a good tactical game, which makes the poor writing all the more frustrating to me. I am enamored of the models, and working hard to make time for more painting so I can put my fleet onto the table fully painted and looking its best. Spartan has done a great job keeping the game affordable as miniatures games go, and I am pleased with their results.

The Ratings:
This is my first review, so I don't have a bench mark against which I can compare my score, but I've done my best. I have broken the score down into four categories, each one evaluated on a scale from 1 to 5, with a 1 meaning that something is absolutely terrible and a 5 meaning that it is as good as I've seen.