I got a lot more work done on the battleship over the past week, and I think I am ready to call it "done" for now. (I may revisit the details as I paint up more of the fleet, and get a better feel for the over all look.) 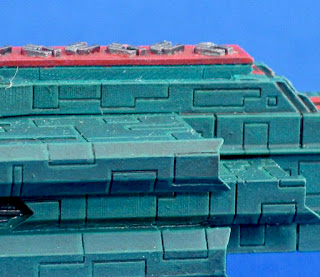 Even through I said I didn't want to individually paint each hull panel, I wound up adding a thin highlight stripe to the edges of each of those panels. It's a little hard to see in the picture above, but there are highlights along the edges of the model, and of all the panels. I used a mix of the Scurf Green and Vallejo Model Color Intermediate Green to arrive at a mild highlight color.

After that, I glued the engine pods in place, and began filling in the gaps between the hull and the engines with green stuff. Once the putty was dry, I applied a little more blackened green to cover it up, and the ship started to look like a completed model, rather than a pile of parts. 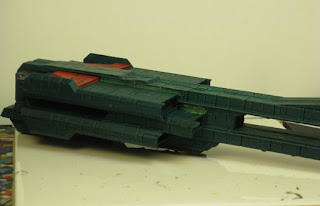 With the model assembled, and the major colors added, I turned to the details. First up were the engines. I started out by applying a fresh layer of plain white paint to the interior of each engine exhaust so I would have a fresh base under the bright exhaust colors.

I decided that an yellow-orange color would look right with my color scheme and fit the over all feel of the villainous Dindrenzi. I also decided that this would be a good time to make my first attempt at adding object-source lighting effects to a miniature. If you are not familiar with OSL, it refers to a technique for using paint to achieve the illusion that light is being cast from one part of a miniature onto another. In this case, I wanted to achieve a dim engine glow along the rear of the ship.

For my base color, I chose Reaper Master Series Explosion Orange. I thinned the paint to the level of an ink and applied a double coat to the interior of each engine exhaust to get a nice strong orange base. I then took that ink and began applying it sparingly to all the surfaces which looked like they should be illuminated by the engine's glow. 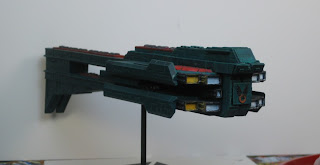 Once I had the base layer an all of the "glow" effects painted, I began to brighten the interior of the engine exhausts with successively lighter shades of orange. I made each layer of highlight by adding a bit of white paint to the orange to get lighter and lighter shades, painting the brightest colors towards the center of the engine nozzle while leaving the original "pure" orange around the edges. 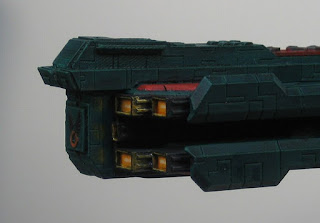 One thing I will say about Spartan's sculptors is that they will not let painter's convenience get in the way of a good model. There is a tiny engine bell tucked deep inside the ship's "wings" right up against the hull, where it is nearly impossible to reach with a brush. I painted those engines with the right orange color, but I decided to fight another day and leave the OSL effects out of the deeply recessed areas for now. That is one of the areas I might revisit at a later date. 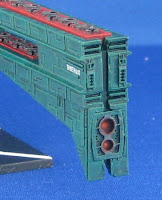 With the engines done, I tackled the final details. I painted a name onto the ship, and added a very dark red glow to the two circular openings in the ship's bow. At some point, I might want to go back and add some windows to the ship's superstructure, but for the time being, I decided to leave well enough alone. My next move is going to be to get a few more ships painted up to this level of completion and then decide if I need to add anything to the look of the fleet as a whole.

For those of you straining to make out the lettering in these pictures, the name painted on the hull is "Tiberius". It seemded to fit a "Conqueror" class battleship.