Last week I received my miniature rewards from the Red Box Miniatures Kickstarter from the fall. I wasn't sure what to expect, but some of the concept art and early work that the sculptor (Tre Manor) was working on looked pretty cool, so I jumped in at a moderate level. 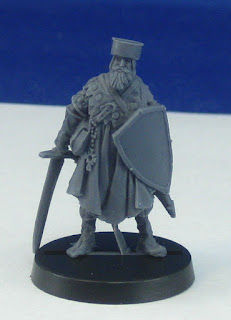 Since I started exploring the wider world of miniatures not tied to major gaming licenses, I am pleased to be able to get these fresh sculpts and get a feel for some of the new stuff on the market.

As you can see, the Red Box figures are cast in plastic. The material is hard plastic, similar in feel  to the ABS material that Games Workshop has been using for its regiment boxes for some time.


One thing that was quickly apparent when I opened the box was the scaling of these figures. Initially, I thought they were much smaller than the majority of 28-32mm models  that currently dominate the gaming market, but, after examining them up close, and comparing them to some other models, it is clear that they are at least close to the same size. 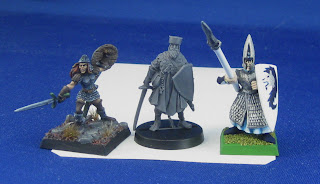 In the picture above you can see one of the new Red Box sculpts next to an old 25mm Ral Partha fantasy figure (left), and a relatively modern 32mm Games Workshop miniature (right). As you can see, the Red Box figure is not all that different in actual size. The big difference seems to be in the proportions. Tre's figures have much more life-like proportioning than most other gaming miniatures. This is most apparent in the size of their hands, which tend to be enlarged and exaggerated in small-scale, fantasy miniatures. I can't say that this style choice is either good or bad. It is an interesting choice, and it sets this line apart from many others. People who want a more realistic look should appreciate it.

The detail is surprisingly sharp, for non-resin plastics. Tre's style is quite rich in fabric details and fiddly bits that have been rendered very well in the final castings. If anything, my concern is that it may be difficult to distinguish the very fine details from fine bits of flash. 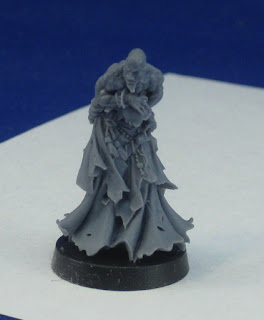 One case is the bit of plastic hanging off the chin of "the Keeper" (shown above). Pictures from the campaign show some kind of detail on his chin, but I haven't yet figured out whether the whole thing is beard, flash or a combination of the two. 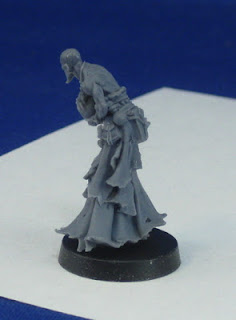 There are mold lines on these figures, but they are not severe. Gauged against other, contemporary models I'd rate the casting quality as quite good. Of note in the casting is the depth of the undercuts in these sculpts. the fold on the Keeper's robe are very deep, and the layers create deep, concave recesses in the plastic. I am no miniatures manufacturer, but my understanding is that that sort of detail is very hard to cast, and tough on molds.

Right now it looks very nice. If it keeps up that way, it may pave the way for some great things. If not, the mold could wear out fast, either making the figure expensive to produce, or causing defects in future castings. I like the way it looks now, so I am optimistic that it will hold up and lead to more good stuff.

Both of the figures shown above are individual commander, or "character" models. Red Box also offers small "ranks" of troops in small group packs. 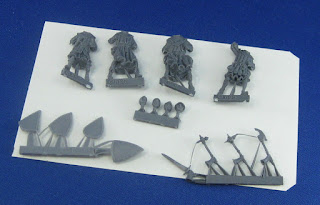 The troops are not as detail rich as the individual commanders. They come in pieces, with interchangeable heads and weapons. For the packs I bought, the bodies are all one-piece, so they are not especially pose-able, right out of the box.

I haven't tried priming or painting yet, so will have to wait for a future update. You can find more from Red Box miniatures here. Tre has announced that he plans to Kickstart more sculpts this year.
Posted by klarg1 at 8:25 PM

Email ThisBlogThis!Share to TwitterShare to FacebookShare to Pinterest
Labels: review