After a brief interruption from my Battletech Wraith project, it is time to fill in the last few details from my Fantasy sword-mage build. 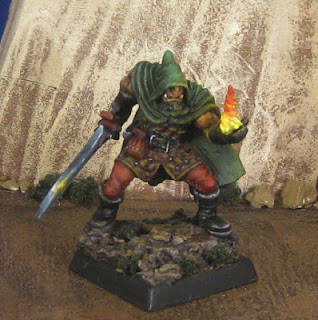 When we last left the project, I had most of the figure painted, but many of the details, including the metal components, the flame were not done. I also had a lot of highlighting left to do on his gauntlets and boots.

By now, my go-to steel recipe should be familiar to loyal readers. It is, essentially, a mix of grey-blues with pure white at the brightest highlights. This model did not have a tremendous amount of metal, but it did have a lot of small parts to highlight, including the belt buckle and the studs in Rogan's armor. I am still not 100% satisfied with the NMM on his sword, but I decided to let it slide and move on the the next thing for more practice. 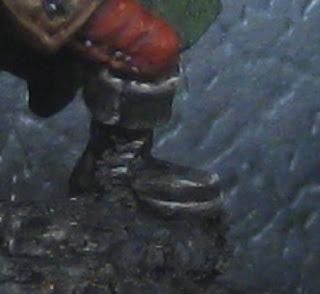 I used the Reaper "Dusky Skin" triad to produce a fairly neutral set of highlight shades for all the black leather in his gauntlets and boots. The strategy I have adopted is to leave most of the leather pure black, reserving the other colors for just the highlighted portions of the material. I did not create an off-black mid-tone for them. Somewhere between two thirds and three quarters of each article of clothing is pure black. 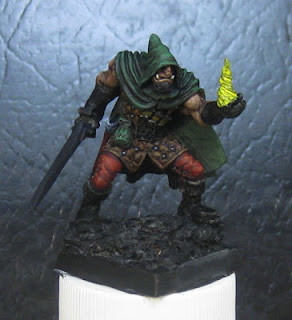 I gave the flame in his off hand a base coat of pure white and then painted it with yellow. Once it had a nice, bright color, I started to shade it orange and then red, placing the darker colors towards the tip of the flame. 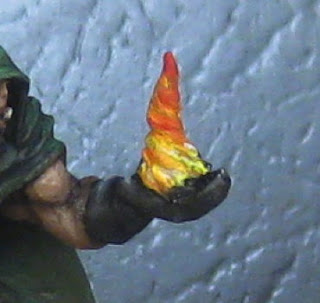 I later went back to add a few tiny areas of pure white back into the base of the flame, inside the recesses of the sculpted whirls.

Left on its own, the flame looks a touch out of place. The eye sees the brilliant fire colors, and expects it to shed light. Normally, I use one of the darker colors from a light source to produce light effects, but the skin tones on the model are not particularly dark, and it is more important to make lit areas look bright than to match shades perfectly. I picked an orange shade from the middle of the flame and created a very, very thin glaze for that color. Once I had the paint nice and thin, I added some matte medium to the mix to thin the pigment even further without thinning the consistency. The result was a bright orange paint that was partially clear, so other colors could show through. 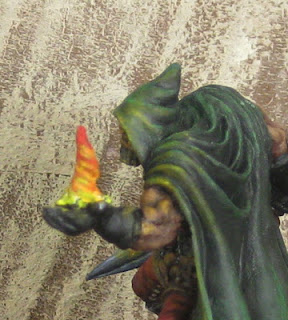 I applied my glaze to all of the raised details that were close to the flame, and facing towards it. I laid down quite a bit of the orange on areas near the light. I used less and less as I moved away across the model. 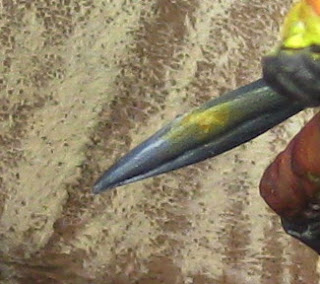 Since the blade of the sword is supposed to be shiny, rather than flat, it should produce a much sharper reflection than the cloth and skin. To produce that effect, I created a very small, bright reflection of the flame on the blade. I am not convinced that I put it in exactly the right place, but I think the effect is about right. Note that the reflective surface also shows a much brighter highlight than flat surfaces equally distant from the light source. 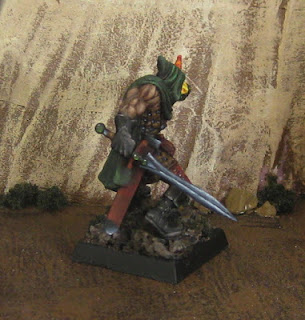 All together, I am pretty happy with this project. The results are pretty close to what I wanted to achieve, and I learned a lot about how to manipulate 'living' models, rather than mecha or other machinery. I also got a lot of useful practice with both NMM and OSL techniques, which is  very good thing. I need all the practice I can get. 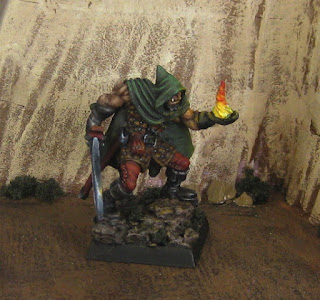 With this project complete, it's time for me to push forward with some older projects that have been sitting on the shelf waiting for attention. Among other things, I need to get my Firestorm Armada fleets into shape for TotalCon, which is just two short months away!
Posted by klarg1 at 10:08 PM