Last time, I talked about the materials I used to base the fantasy character model I've been working on. This post covers the rest of the construction and preparation for the model. 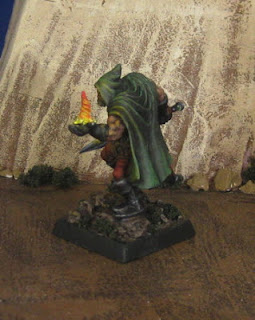 I think I put in much more work than I had to to get his left hand to look the way I wanted it to. I should have kept looking through miniature's lines until I found a better suited source for a wizard's gauntleted hand. Still, I got there eventually.

As mentioned in my first entry, I had initially ordered a nice, lead necromancer model as a hand donor. I immediately set about cutting away the skull cradled in his outstretched hand to make room for my planned flame detail. 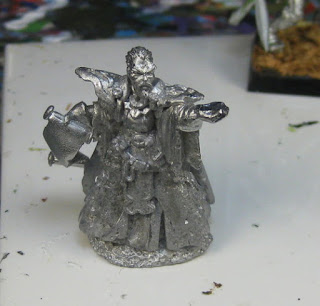 Once I had the hand cleaned up, it became apparent that a wizard's dainty hand is not the same as a half-orc's meaty paw. To say that I was concerned that the hand might be a bit too small for the job, would be an understatement. Faced with this dilemma, and not wanting to spend any more money, I actually resorted to forward thinking. 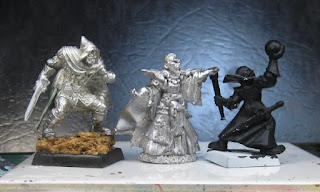 I dug around in my piles of old miniatures, and dug out another wizard, also a necromancer as it turns out, and photographed all three of them side by side. If you pay close attention to this late addition to the parts list, you may notice an obvious, glaring flaw that I didn't notice until I was pretty thoroughly committed. If you see it, you may consider yourself more observant than I was.

Using my rudimentary photoshop skills, I used that image to create a composite that let me get a look at how the finished product might look in several possible configurations.

I thought the combination on the far left, using both models, provided the best combination of matching the texture of the rogue's original gauntlet while providing the best match to the size of his off hand.

As a part of putting my thoughts into practice, I started by lopping off the metal wizards hand and gluing it to the model. Seen in person, it's hard to imagine the two pieces ever really fitting, although the gauntlet cuff did look pretty decent. 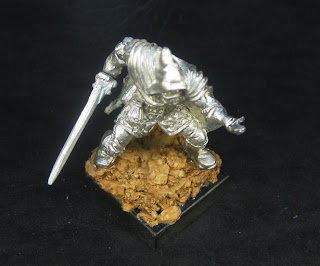 Sadly, it was only after I went as far as cutting off the tiny metal hand and starting preparation on the plastic replacement that I noticed the Obvious, Glaring Deficiency™ alluded to above. If you said "But wait! The plastic guy is right handed!" You win the pool.

Faced with another opportunity to invest more time, energy and money into building the left hand on a single character model that was supposed to have been a simple chop and replace job, I opted to press ahead and convert the parts as necessary. Unfortunately, I do not have a photo of the model with two right hands, but here you can see a picture of the nearly finished product, with the plastic thumb removed and a new one added on using two part epoxy putty and a bit of brass wire armature: 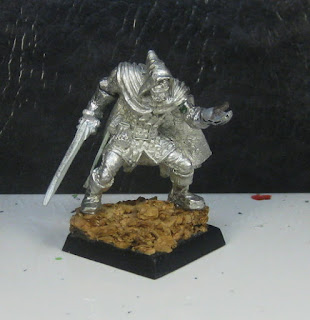 With all of that foolishness out of the way it was smooth sailing to the end! I had read a cool tutorial on how to sculpt flames for torches and similar pieces on hand cannon, and I wanted to try it out. I grabbed another blob of putty and started sculpting.

I won't go into the details, already laid out beautifully by JCoo, but I can summarize it briefly: I made a small ball of putty and formed it into a rough cone. I then used a sharp hobby knife to carve a few lines around the base, angling them slightly to suggest a spiral. I then stretched each line slowly upwards in a gentle spiral to form a whirling flame. I can't say I did as well as the example in the linked tutorial, but I'll see if I can find more excuses to practice and improve. 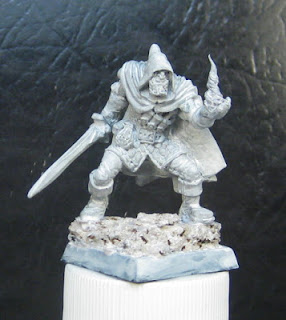 After all of that, it was a bit of a relief to pull out my trusty rattle can of primer and get ready for paint!
Posted by klarg1 at 9:14 PM