One of our local Catalyst demo agents asked me to provide a miniature for his next scheduled Battletech demo event. I told him that I didn't have one ready, but that I could get one done in time. The deadline for completion is December 16th, so we'll see how I do. I am not the speediest painter out there. 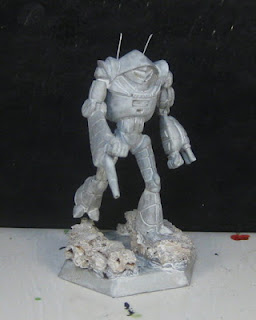 My first move, now completed, was to bite off a needlessly elaborate basing scheme to complicate the project and add work. No miniatures project can be complete without extra work. The picture you see here is as far as I've gotten, as of the time of this writing. 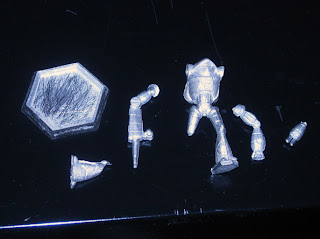 The miniature in question is a Wraith battlemech, presumably crucial to this month's demo scenario. I would rate the Wraith as a mid-difficulty sculpt for an Ironwind Metals 'mech mini. It probably rates about a 4/10 on the scale, with a 1 being a one-piece miniature, and a 10 being a multi-part terror like this one.

In keeping with today's theme, I decided to make a few minor changes to improve the look of the model. I am hard pressed to say that the labor I put in was justified by the improvements they produced, but I like them.

I started out by carefully removing the 'mech's moulded-in base. That step is becoming a theme in my builds, and, I suspect, will become standard practice for me as I get better at basing models. In this case, I wanted to repeat my cork basing experiments from my latest fantasy build, so I needed a way to plant the 'mech's lead foot on my crafted terrain.In the above picture, I had already cut away most of the base and was just preparing to saw off the small part that actually touched the 'mech's foot. 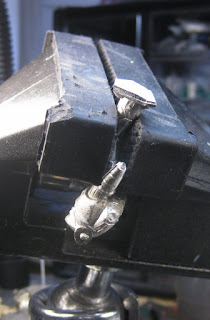 I actually had a false start here and butchered one Wraith's foot pretty badly in the process. Expect to see the remains of that model appear as a piece of terrain some day. Fortunately, I had a spare on hand, so I could press on without delay. The second time around, things went quite smoothly. The model appearing in the next picture is actually the second Wraith: 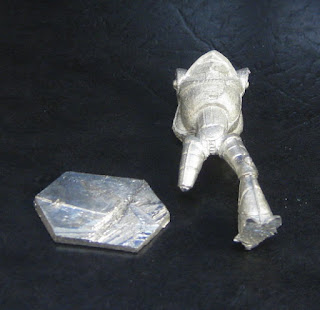 Note that the piece of metal that has been cut away is much larger, since I did not waste time cutting it away in sections or trying to grind it off with a rotary tool the second time around. 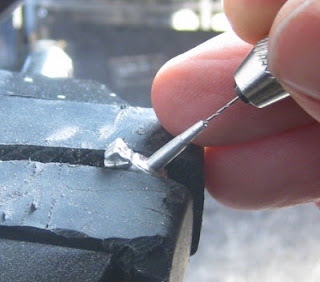 While I had my vice set up conveniently in position, I carefully drilled out the tip of the 'mech's large pulse laser. The sculpt does include a small bore opening there, but deepening it will add real depth to its appearance. I did not bother to repeat the process with the smaller lasers on the left arm. They are, as mentioned, smaller and less prominent, and they were going to be pointing down towards the ground in my planned pose. 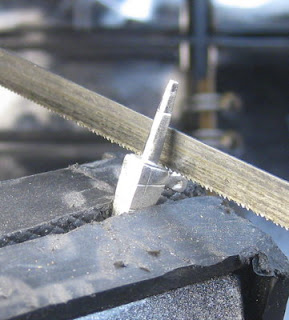 The next modification was a bit more delicate, but, in my opinion, much more vital. For whatever reason, the Wraith battlemech has a bizarre wrist arrangement. It's right hand is mounted at a ninety degree angle to the axis of its right forearm. This keeps the hand away from the matching laser barrel, but looks extremely awkward to me. I took it upon myself to sever that hand and replace it at a less extreme angle, using a bit of steel paperclip wire to pin it solidly into position. 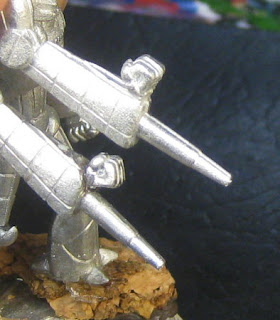 Since I happened to have a spare, completely intact, wraith arm on hand I snapped a pretty good comparison shot to show the change. I will leave it up to my readers to decide whether or not the change is beneficial. (The chopped arm is on the bottom.)

The one other thing I did was necessary for my basing plans. Battletech miniatures are pretty heavy as high-tin pewter goes, and they need to be mounted solidly. For all of its basing benefits, cork is not all that strong, and it is not a suitable foundation for an awkward, action pose like the wraith's. 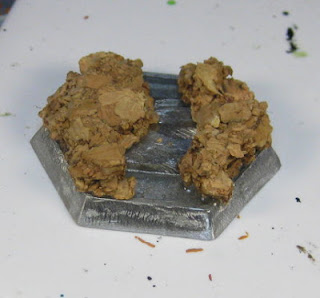 To correct all that, I drilled a deep hole into the bottom of the Wraith's left foot and glued a sturdy piece of brass rod into place. I also glued the metal base that I originally cut off of the miniature to thicken the bottom of the pewter hex base, and give me a solid foundation. 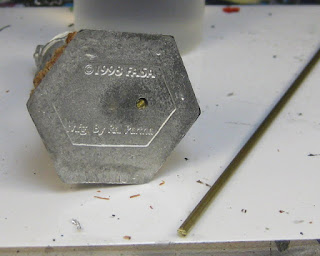 After drilling a hole through the thickened base, and the cork layer on top, I glued the whole assembly together. 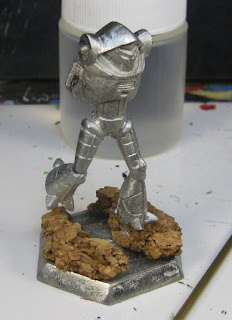 After that, it was on to primer and paint. Of course, I haven't gotten to painting anything yet, so it remains to be seen whether or not the build will be ready for the big game.