Well, the Sunday Battletech demo game has come and gone. I managed to get the Wraith fully painted for the event, but I wasn't quite done sealing and basing the figure. Even so, I showed up and played with it, and the game was fun, even if it wound up a bit one-sided after a few lucky hits early on. 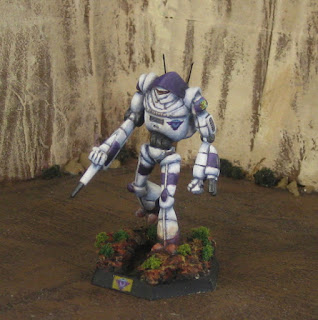 I still need to hit the model with an extra layer off Dullcote, and lay down some Woodland Scenics "Realistic Water" along the stream in the middle of the base. Once that's done, I can declare victory and move on to the next thing.

I did use one new technique on this model, the Free Worlds League insignia on the 'mech's chest and on the front of the base are decals, but I painted over them with my own purple paint. I got the idea  back at Reaper Con last spring. The decal provides a template to guide your freehand work, allowing for nicely symmetric and proportional shapes, while still keeping the look of hand painted detail. It wasn't perfect, but it's another tool in the box. 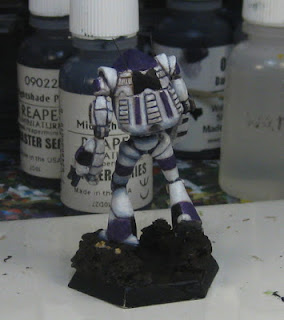 I was surprised at how much I enjoyed painting the Wraith. The original 2D artwork for it never really spoke to me, but the Iron Wind sculpt really takes paint well and looks nice on the table.
Posted by klarg1 at 8:56 PM