I've been spreading myself a bit thin lately. I have joined several new gaming groups in my area, and I have not withdrawn from any of the ones with which I was already involved. To top it off, I am racing to prepare for this year's Total Confusion, where I will be both playing in games, and also running several events.

A quick glance at my painting station shows all of the projects that have piled up as I lurch from one priority to the next. 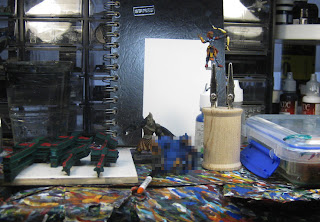 My main goal right now is to finish the Firestorm Armada ships you see on the left for TotalCon, as I promised to have them there for a friend's demo game. After that, I want to finish up some of the RPG character models I've been working on. Of course, I also want to paint up a few competition pieces for upcoming events. (One of which has been partially blurred in the picture.)

The good news is that I should have WIP entries for some of the projects before too long. I have high hopes of actually finishing several of them in February.
Posted by klarg1 at 10:34 AM