The past few weeks have been consumed with preparation for a business trip (now over) and for Total Confusion 2013. With the convention in the can, I am hoping I can turn my attention back to painting.

Part of my preparation for TotalCon was to help a friend to prepare a demo of Firestorm Armada. We staged it as a reprise of our past Aquan vs. Dindrenzi starter fleet battles, this time sitting on the sidelines and watching while our demo-ees locked horns. 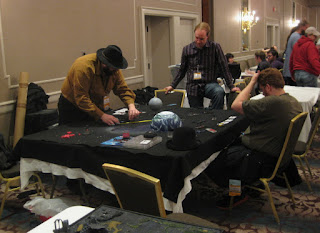 The demo was small, but I think everybody had a good time. Only time will tell if it will lead to an expanded local community.

Thanks to my drive toward convention prep, I finally have a complete Dindrenzi starter fleet ready to roll in time for the con. Combined with my painted heavy cruisers and gunships, I am dangerously close to a field-able FSA fleet. All I really need to do now is tackle the dreadnought. 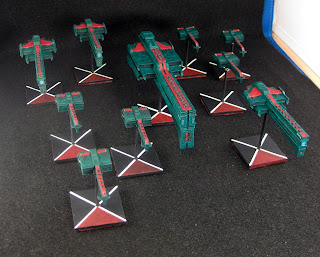 In other Firestorm-related news, Spartan has released a revised and updated version of the Firestorm Armada rules as a free PDF download on their web site. The new Rulebook contains all of the changes and errata that have been made to their hard-bound second edition rulebook, and has been somewhat cleaned up and re-organized.

In my opinion, the new book is a major improvement over the existing print edition. The rules are better organized than they are in the print book, and the errata that have been applied to the v2 rules make it into a very solid rules set. If Spartan can bring forth a few exciting new models within the first half of the year, I think things will look very bright indeed for FS:A.
Now I just need to get to be ready for ReaperCon which is just under seven weeks away!
Posted by klarg1 at 7:29 PM