I'm already running late, so I'm going to make this update quick. I will try to post one more before ReaperCon starts next week. 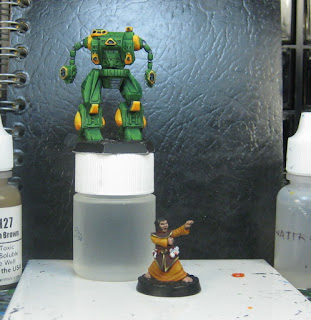 With the base shading complete, I decided I wanted a break from the Thor's endless sea of green and yellow panels. Instead of working on that, I pulled out my halfling caster model and implemented one of my color scheme designs from last week. (As it happens, not one of the ones shown in the last update.) 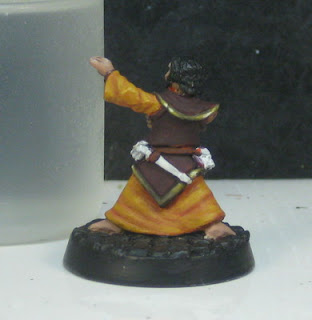 I wanted the model to have a bright, rich color scheme, and I was not sure I was willing to switch to a cool scheme. My final choice was the red and gold pattern you see here. (Taken Monday, April 1st) 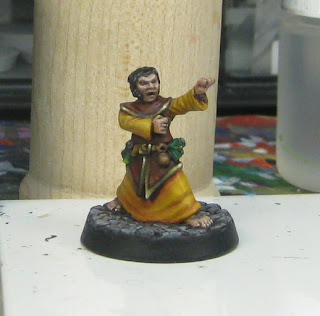 On Saturday I put in more time and actually finished something. It felt good. I think I could probably do a better job with the highlighting on his hair, but it's good enough. I'm, pretty happy with the rest of it. 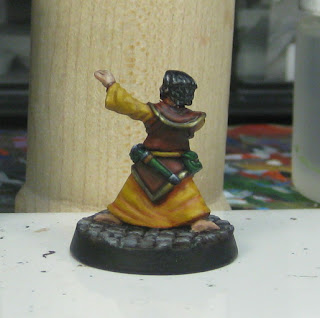 Since this week is already underway, I will include my project for this week:

I received my Kickstarter reward from Renaissance miniatures. I didn't order one of the huge rewards, but I bought a big enough building to get a feel for their modular terrain design. It looks quite nice, once you get it put together: 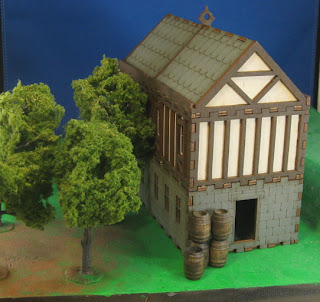 I have to say that the assembly is pretty fiddly, and it is not hard to misalign parts, making it hard to use the separate modules as intended. I got better as I progressed, but I would not recommend it to somebody who is not already a modeler.

It does look quite nice though. If you're willing to put in some work, you might want to check out their new Kickstarter for Asian-themed designs.
Posted by klarg1 at 10:50 PM