Back Home and Ready to Go

I returned from my second trip to Reaper Con late Sunday night.Just like last year, I had a wonderful time, and I got to play around with Reaper's Bones material for miniatures. I am still hugely impressed by the stuff, but even more importantly: This year I brought along some portable lights and managed to get some real painting done during the event. 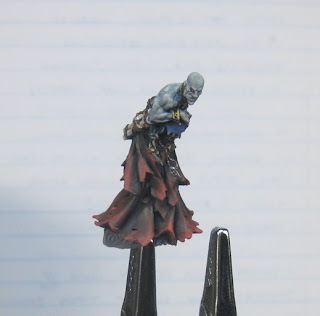 I picked out the "Keeper" model, from Tre Manor's Red Box Games Kickstarter. I previously commented on Tre's new line of spin-cast resin models here. I've been itching to paint this figure, and RCon was the perfect chance to get started.

The picture above shows my progress by the end of the convention. I do have an in-progress shot, taken during the event, after about a day's worth of off and on painting: 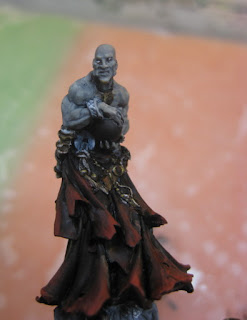 Tonight, I took the time to mix up a fresh set of skin tones and re-shade his deeply-sculpted muscles and bone structure to get a slightly smoother blending across his skin. The model inspired me to experiment with a less-than-healthy gray-green skin tone, that I am thinking about applying to a whole set of undead ghoul-type models in the future, perhaps with a touch more refinement. 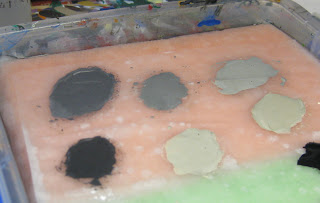 I snapped an imperfect shot of the colors on my palette, and, since I am no expert at perfecting the color balance on my low-end camera, I have also included a shot of the paints used to generate the mixes in question. 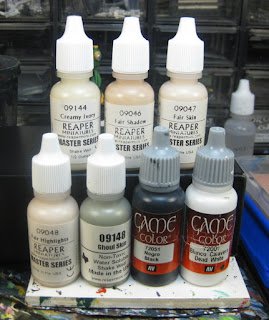 At the end of the evening, I am satisfied with his skin. It is not A-grade, competition level, but it looks good, and gets the point across nicely. In my next session, I will do a little re-working of his... skirts, and try to refine the paint on his assorted bangles and jewelery. 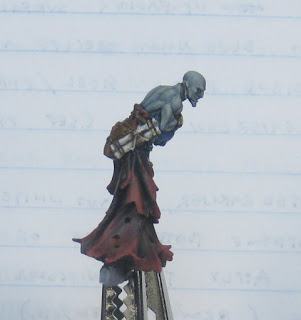 As an added bonus, I include this shot of Tre Manor himself, posing with my figure in-hand. He was quite gracious about me pestering him with questions and comments during the convention. 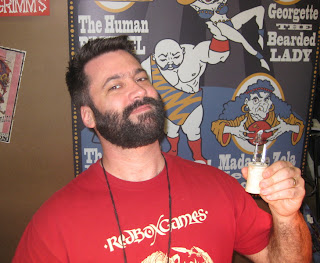