Spartan Games has just begun the relaunch of Firestorm Armada with a new rules version, and, like any good miniatures company, a complete refresh of their line of models for the game. I have not ordered a new fleet, as of yet, but I thought that now, almost two years after my original review of the game, might be a good time to comment on the new version, and on its history. 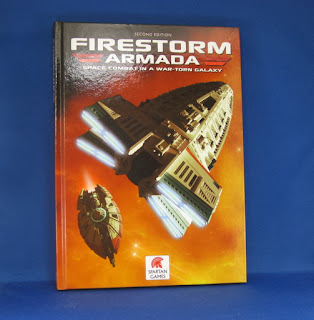 The new rulebook was just released this book, and includes a substantial overhaul of the game system. The book is nicely put together, with beautiful photography showcasing the models in the studio fleets, and numerous example diagrams to illustrate the rules. A new feature of this edition will be dedicated fleet books for each race. Basic statistics for an introductory fleet appear in the main rulebook, but players will need to obtain more complete information to play more complex fleets. Fortunately, the fleet books should ship next month, and Spartan has made the fleet lists available for free on their web site.

The Firestorm rules have a complicated history. My first rulebook, from back in 2011, was the version 1.1 reprint of the original rules. It included a variety of errata over the original book, but was the same game. In 2012, Spartan released a "Hard Bound" edition of the rules, which included many substantive changes in the rules. Many players referred to that rules set as "v2", but Spartan has consistently used the Hard Bound label.

Earlier this year, Spartan released an "errata" document which changed several rules, seemingly in response to fan feedback, and not long after, a free PDF version of the rules, which made yet more changes. It is my opinion that the PDF rules set was the best to date for Firestorm, but it does not have a clear version label.

This new edition is also hard bound, and includes the label "Second Edition" right on the cover. By my reckoning, this is, at least, the third significant revision, but it is the biggest change, and it's their game, so who am I to judge?

Fleet construction has changed. Instead of base percentages for each type of ship, fleets now have restricted choices from a pool of options. A basic fleet might only be allowed to select a small number of cruiser-class squadrons, but the total point value for those squadrons is now unrestricted. Individual ship classes now also have built-in options that allow players to customize them to some extent. This is especially true for the larger battleships and dreadnoughts, which often have many options available at fleet construction time. This model of force construction mirrors the evolution of other popular miniatures games, and is likely to work out to an over-all improvement in the system.

To me, one of the biggest change to the feel of the game is the introduction of distinct weapon classes. The old game had different rules for torpedoes and primary weapons. The new game introduces subdivisions within those categories (kinetic, beam, nuclear, etc.), including a whole range of special "coherency" effects that come into effect when you attack with a single weapon type. This change replaces the standardized 8" range brackets that defined combat in the old game with per-weapon type range brackets that can be anywhere from 8" to 12". These changes make the individual fleets and ship classes feel much more distinctive in play style than they did in the old game, where things tended to revolve around the race to range band II at 16".

Fighter wings have changed dramatically. In the old game, wings operated independently as counters on the board. While they can still do that, to a very limited degree, in the new game, they are now more of a short-to-medium ranged weapon system attached to their parent carriers, and can dish out a tremendous amount of damage, once a carrier gets into attack range.

Boarding has been greatly simplified, and mines have been made into effective weapon systems, which may come as a rude surprise to anybody expecting them to behave like they did under the old rules systems. The deck of STAR cards has also disappeared. STAR cards have been replaced with "Tactical Ability Cards", which players can select for themselves at the start of the game and play during he course of the game. There are myriad other tweaks and changes, but you should have the basic idea.

Finally, and importantly, the victory conditions of the game have changed. Instead of basic victory point, players now keep track of a "Battle Log", which moves up and down with the ebb and flow of the battle. Players can even voluntarily lower their own score to gain certain temporary benefits during the game. When a player has a big enough advantage over his opponent, he starts to gain bonuses for his fleet. At a certain point, a player can even be forced to concede defeat. I think the concept of "spendable" victory points is an interesting one, but I am firmly of the opinion that the rules should not kick a player when he is already down. If one player is winning, why should the rules help them win more? I don't think this is a major problem, but I do think it is unfortunate.

With all the changes I've named, one might wonder: What is the same?

The basic system of maneuver has not changed. Ships still have a mandatory minimum movement that they must complete before every turn, and turns still use the same template. Ship weapons still operate in range bands, even if the size of those bands can vary by weapon type.

The "buckets of exploding dice" system of attack and defense resolution is much the same as before. There are a few new tricks that players can use to enhance their attacks, or bolster their defenses, but the fundamental system of counting successes and failures among piles of six sided dice remains unchanged.

In short, the game has many more bells and whistles, and Spartan has tweaked some of the details of game play, but the essential feel of the game is much the same as the original.

In my, still limited, experience, the game is both faster and more deadly than before. Coherence effects and increased weapon ranges tend to make engagements get serious much faster, and have ships start exploding much sooner in a game. This can make the game a touch more capricious than the original version, but the increased options and variety enrich the game. Is it better than before? I think it is, but it will take more time to be sure.

This post is running long, so I am going to put off any commentary on newer sculpts for a later day, but, since there are very few pictures in this entry, I will finish with a teaser, taken from the toy that came with my copy of the rules: 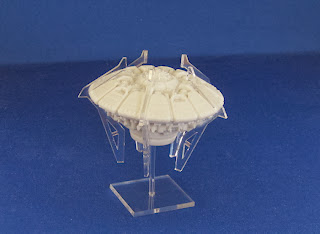