Over the summer, I received the first of several miniatures from the Ironwind Metals LAM project that ran on Kickstarter. (LAM being the accepted Battletech abbreviation for "Land-Air Mech" - the transformable mecha of that particular universe.) I am not ready to post the paint-up for this project just yet, but the build itself was quite an undertaking, so I thought I'd post it now. 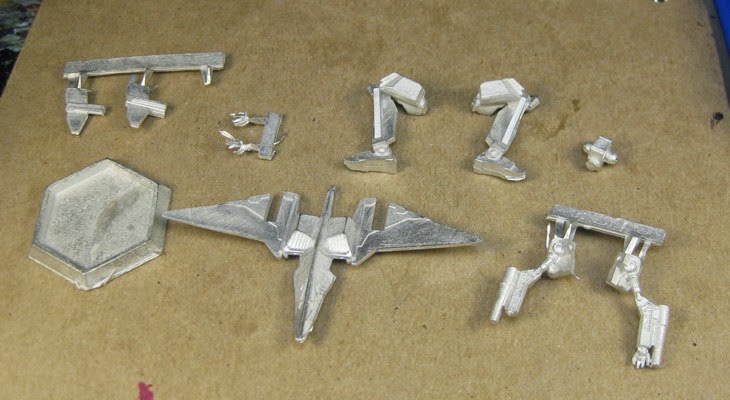 This particular model is for the Mk.1 Stinger LAM. I chose to get the hybrid mode version, half way between mecha and fighter jet modes. As you can see, the mini comes in quite a few parts. Note that the hex base was not included with the model. 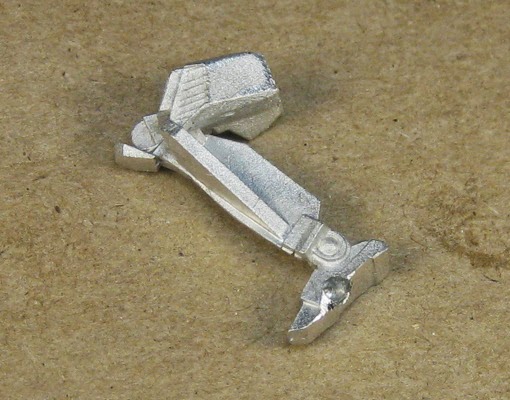 Issue one with this miniature is that, not only does it not include a base, but the feet are tucked up under the fuselage in a flight posture that can't possibly balance the figure upright. That meant that my first job was to find a way to mount it on the base. As you can see here, I drilled a mounting hole in the foot. 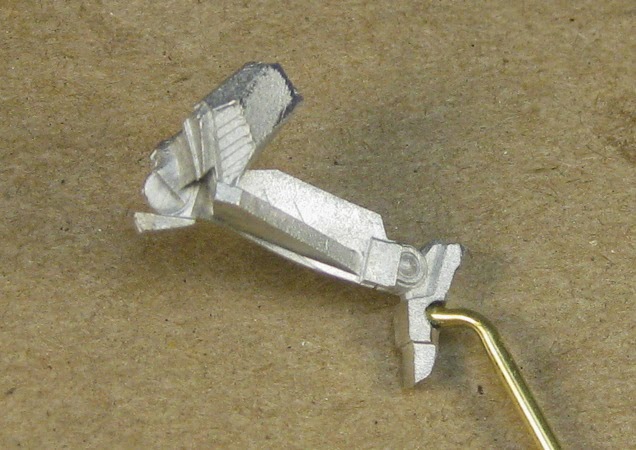 With the hole started, and placed at a difficult, diagonal angle in the foot, I began test-fitting a brass pin to support the figure. I bent the pin to allow me to hide the pin inside terrain on the base. I wanted to make it look as much as possible like the 'mech was airborn. A tip for readers: drilling a hole into the body and placing it on a flight stand would most certainly be easier! 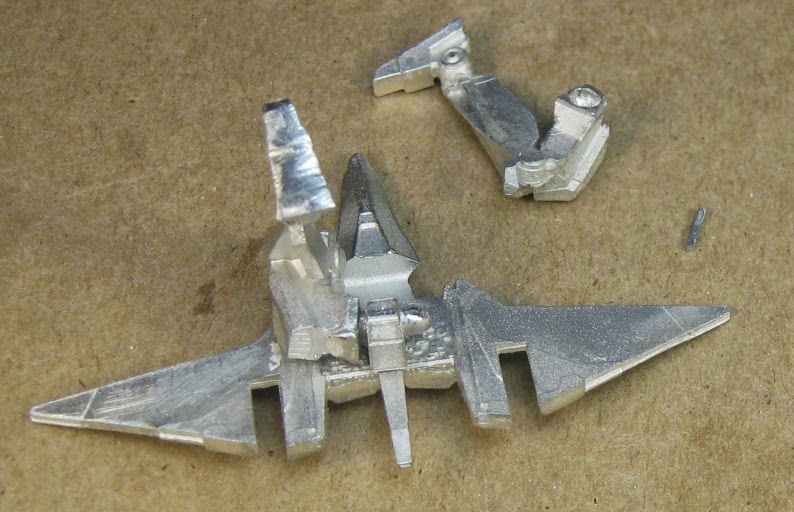 It is worth noting that the LAMs represent a bold experiment in CAD sculpting for Ironwind. The result is a very precisely engineered miniature. The parts fit more closely, and with tighter tolerances than almost anything I have worked with before. It also means that they were cut apart inside the CAD program, rather than by the hand of a master mold-maker 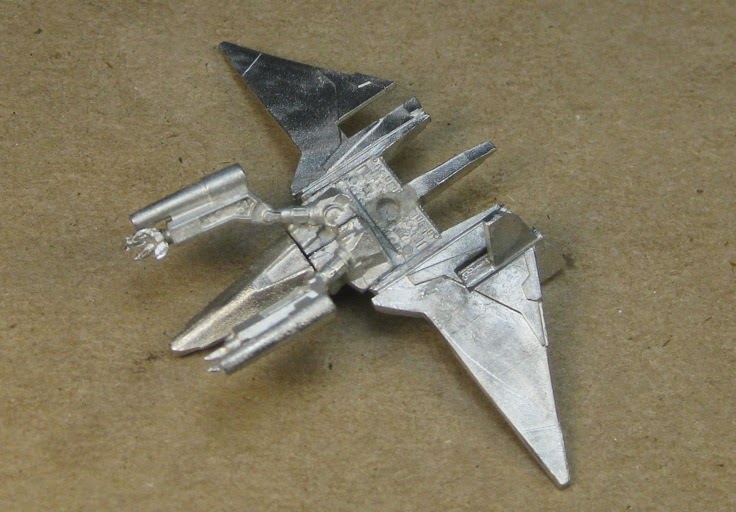 Why do I mention CAD at this point in the build, you ask? Why, because it is completely impossible to mount the arms on the 'mech once the legs are in place. Each arm comes as a part of a carefully interlocking piece of the fuselage, and both must be fitted into place before the legs and hips are mounted over them. This is one of those times to learn from my mistakes: Glue the arms first! 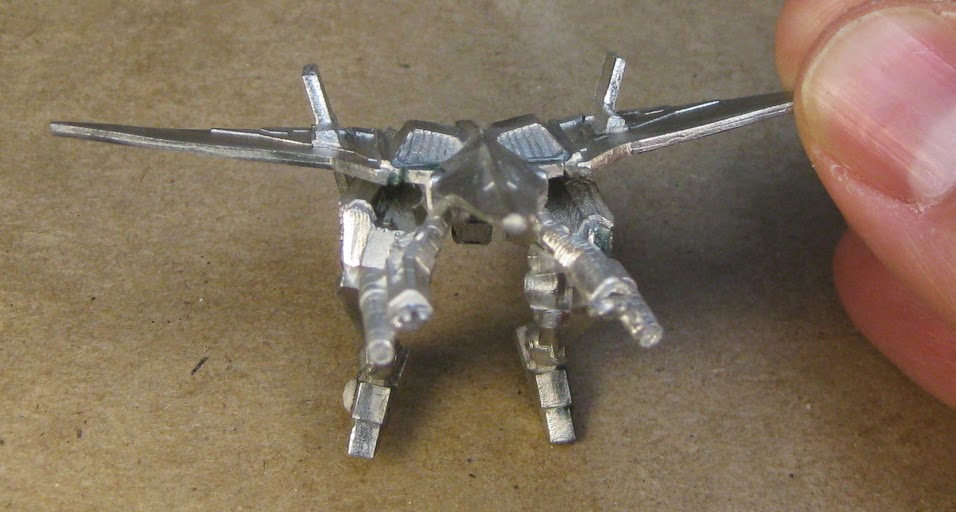 With the arms in place, I was able to re-glue the hips to the body, and the legs to the hips. Another place where the mini's CAD origins were apparent was the join between the tail fins and the body. On every other plane-like model I have ever worked on, the fins were simple slab pieces that glued to the fuselage or wings with a simple butt joint. For this miniature, each tail fin includes a horizontal piece of the wing that must be precisely slid onto a slot in the main body to fit. One of them fit with a near seamless perfection. The other required the files, and much cursing. 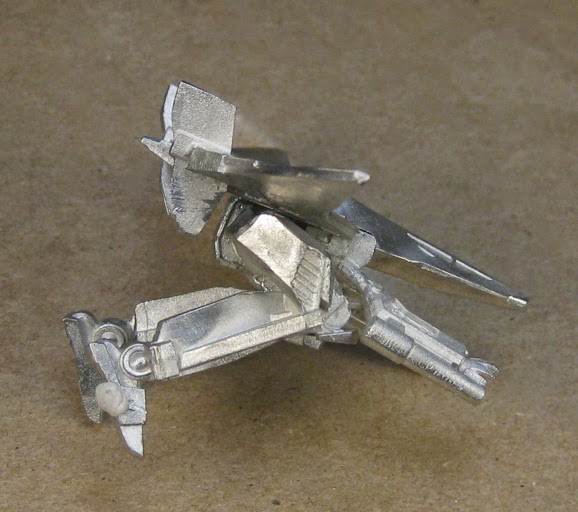 Overall, the mini is quite nice, and most of the details look great. I know CAD will be an increasing part of modelling's future, but it is plain that the new generation of high-tech sculptors needs to learn some of the lessons of mold-making past.