I got to spend last week at Gencon 2015, which was an absolute blast. I got to try out Robotech RPG Tactics on the table. I doubled my games played for Dropzone Commander, and generally got to take in all sorts of cool stuff. I won't try to capture all of it here, but I will try to hit some of the highlights. 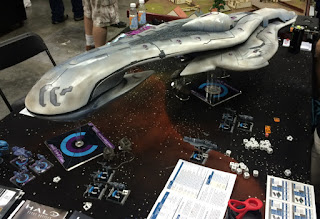 Certainly, the biggest miniatures splash at the con was Halo Fleet Battles, by Spartan Games. This was Spartan's first trip to Gencon, and they only had a small booth to show off their product. Fortunately, the War Store was there to provide some additional table space, and a store front for product sales. If they hadn't been, I Spartan would have been completely overwhelmed. They even had the gigantic Covenant flagship looming over the demo table to keep all the Human players in-line. 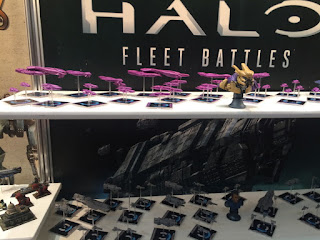 Spartan's stated plan is to design Halo Fleet Battles to allow engagements among dozens, or even hundreds of ships, which should look spectacular on the table. I did not get to play a demo, but they were running a table all weekend at the War Store booth. I have to say that it did look very pretty. I hope Spartan comes back bigger and better next year. I'd love to see ramped up support for their games at the big show.

The other space combat game on display was Dropfleet Commander, by Hawk War-games. Shown above is a beautiful, giant-sized UCM cruiser. Hawk Dave was on-hand in the booth to give hints about the game and discuss the models. I have to say that I am absolutely in love with the look. 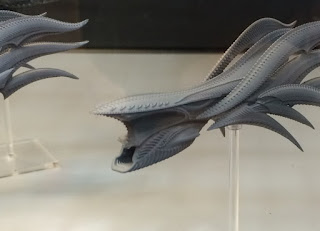 As far as I am aware, Gencon was the first time Hawk has rolled out previews of their Scourge ship designed, which, I have to say, I absolutely love. You can see a close up of one of their cruisers in the photo above.

From Dave's commentary, it sounds like DFC will be objective oriented, much like its predecessor, Dropzone Commander. Fleets will engage above a planet's surface, with cities, orbital defenses and other features on the surface below. Fleets will maneuver in and out of 3 layers of atmosphere as they jockey for position over these objectives to land troops, bombard the surface, or prevent their opponents from doing the same.

It sounds like ships will have a signature value which dictates how hard it is for an opponent to hit them at range, and that these values may vary depending on the ship's actions. One comment I overheard is that Shaltari ships would light up like a beacon when they raise their shields, which might lead to some interesting trade-offs. The UCM fleet is rumored to be well-rounded and turret-focused, while the Scourge are supposedly a bit more focused on short-ranged combat, much like their ground troops. 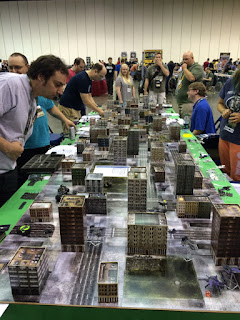 A highlight of my trip was the Dropzone Commander Gencon Tournament. 16 players got together Friday morning to line up and vie for control of the cradle worlds. I brought my Shaltari to compete, with the paint of their base coats still slightly damp from earlier that morning. 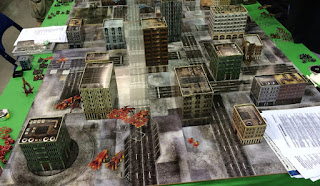 My first round match-up was against a very inexperienced Scourge player, and wound up being a bit of a mess. Working out how to set up for our scenario took a little time, and I did not discover until turn 2 that my opponent was playing an illegal army list, with Eden's Dinosaur serving as his commander. (Special commanders are not permitted in tournaments.) Hawk Simon was able to sort out his list, and establish a relatively workable correction, but all the mistakes and discussion cost us a tremendous amount of time. Unfortunately, the net result is that our game timed out at the end of turn 4, with my forces still getting into position to claim table quarters, and a draw.

I feel that I was in a strong position for a win, had the game gone to a full 6 turns, but I suppose a draw is not too bad for my first tournament game, and only my fourth game overall.

I do not have a photo of my second round fight, which is unfortunate. It was the best game of the lot, against a skilled UCM player with a very heavily air-focused list. Our mission was "Secure the Flanks", and both of us launched our forces straight at the objectives and focal points with an eye towards maximizing victory points.

I was unable to secure the objective nearest my deployment zone before my opponent demolished the building containing it. All of my infantry escaped, but it placed me at a disadvantage once his infantry made off with his own objective.

I did manage to secure the objective in the center of the table, but had no clear avenue to extract it from the board with his anti-air units closing in. I took a gamble by running one of my Eden gates into the middle of the board at the end of turn 3 and landing it next to the building. I was able to seize the first activation for turn 4 using the "Central HQ Directive" card and execute that hand off from my infantry to the gate. My opponent had one shot to bring down the gate as it took off and raced for the board edge, and, sadly, just barely brought it down. That play pretty much sealed the game, and I have to say that it was both tense and exciting.

At the end of the game, both of us tried to seize the two focal points on the board, and wound up splitting them, one apiece. This was another case where I gambled to try to score points to gain a win or tie, racing my damaged command vehicle towards the second focal point. Sadly, my opponent was able to focus enough firepower on it to finish it off before the game ended. (In point of fact, we traded commanders, with his Phoenix going down in flames the same turn.)

This game was a loss for me, but a tense and exciting one. 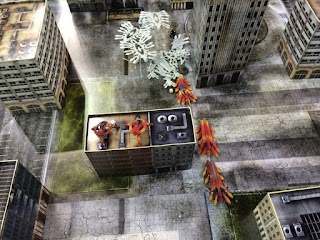 In the third, and final, round of the tournament I drew a mirror match against another Shaltari player, with a very similar list design. The two of us traded shots back and forth, which did not go well for me. Hot dice quickly knocked out both of my Jaguar walkers, and damaged my Gharial command vehicle. My saving grace was that I managed to keep my opponent at least slightly off-balance, forcing her to relocate her troops back and forth several times throughout the game. I also managed to bring down one of her objective buildings before she could extract anything in the process, busying a squad of Braves in the process.

Ultimately, this game also came down to two factors: The complete inability of my Braves to locate an alleged objective in a large building through five turns of searching, and a massive scrum over the central focal point of the mission on the very last turn (pictured above), which my opponent dominated through superior positioning. Combined, those two things yielded a tie, and an overall record of 0:1:2, which placed me in the middle of the field overall.

Next year, I plan to do better!

Masters & Minions
A regular highlight of Friday night Gencon for me is the Annual Masters & Minions game with Catalyst Game Labs. Every year, ticketed fans get to play against Catalyst employees and other associated insiders in a friendly round of Battletech. 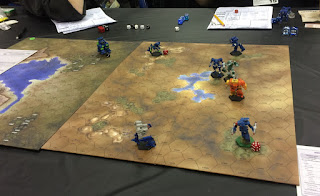 This year, I signed up with three friends, to form a full group of four, and got to play against some fine gentlemen from Virtual World Entertainment, of Battletech Pod fame. You can see our table in the photo. My 'mech is the green and grey Sphinx charging ahead on the far side of the board.

As you can see, the 'mechs on the Masters side of the table were quite nice looking, and filled out some classical Clan paint schemes. One of the rewards each year is for the players to go home with a painted miniature. Of course, the 'Master' 'mechs at Loren Coleman's table  went a slightly different route: 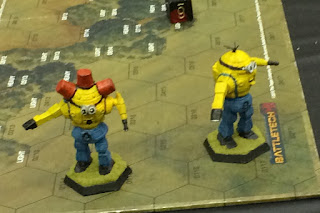 Next year, I will have to check out the pods early in the Con, before the lines get too long, to say hello and see what it's really like. Many thanks to the Virtual World guys for a great game. 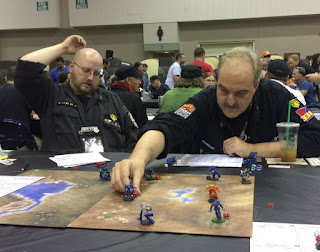 Art Show
My final highlight for this year was the annual art show. I always try to leave some time to see the prints, sketches and other works of art on display by artists from across the industry. This year, I fell in love with some of the work by Robotech RPG artist Charles Walton, and was fortunate enough to be able to bring a piece home with me. 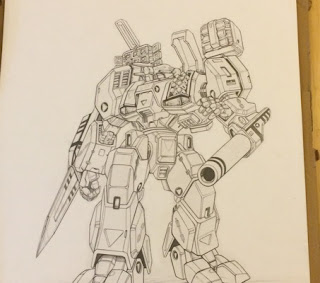 I want to thank Charles for being extremely friendly and gracious with his time. It is always a pleasure to meet the people who work on elements of the hobby that we love. 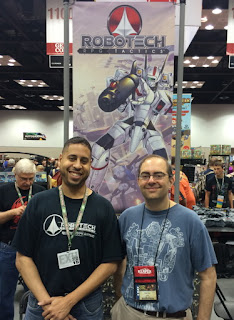 I'll add that, based on the demo I played, Palladium's Robotech RPG Tactics game is pretty entertaining. I'm going to have to paint up some mecha and give it another shot soon.
Posted by klarg1 at 4:37 PM