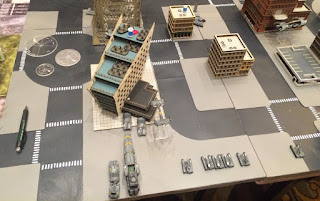 
For my own build, I started with a favorite of terrain of many terrain builders: Pink foam insulation board. In this case, I used relatively cheap 3/4 inch stock, cut down into 2'x2' sections. The plan was to use four of them to assemble a standard 4'x4' tournament board. 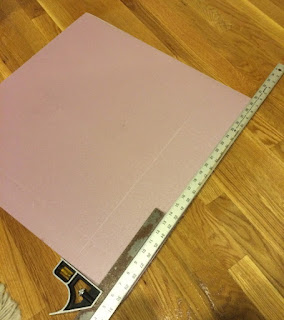 For DropZone, I wanted both a smooth surface - to represent flat urban pavement - and a sturdy surface to support game play. As nice as pink foam is to cut and shape, it is pretty soft, and can easily be damaged by die rolling, or rough handling. For this project, I used 0.020 styrene sheet to plate over the surface of each board. 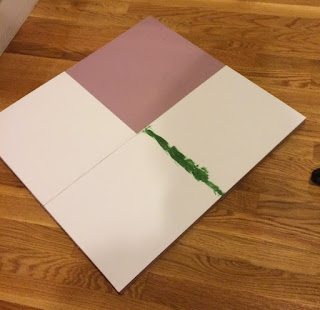 I used two-part epoxy resin to bind the styrene to the pink foam. Normally, I use white PVA glue for scenery, but it doesn't hold styrene particularly well. Superglue holds better to styrene, but the pink foam can't hold up to it. When I tried it, I found that there was some form of chemical reaction that ruined the surface of the pink foam without sticking to it. The toluene solvents in many filler putties, such as Squadron Green Putty, will do the same. (I only made that mistake once!) 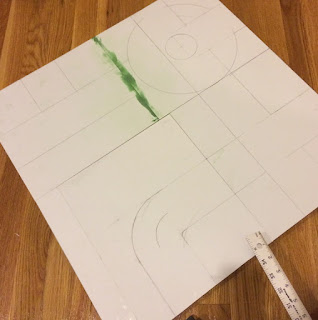 With the plating in place, I broke out a ruler, compass and pencil to lay out a basic street design. I wanted something that had some variation and interest, but fit with the basic four-lane road standard featured by other popular Hawk terrain. 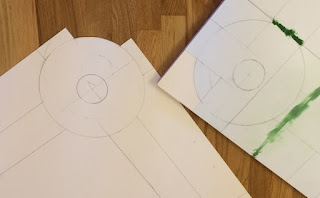 The road design provided a road layout, but to design them I needed to fill in the space between streets with raised material to represent sidewalks and land between the road cuts. For this project I used very thick poster paper, bought at a local art supply store. It wasn't quite as nice, or as easy to work with, as styrene sheet would have been, but it was much cheaper than the equivalent thickness of styrene (Slightly less than 1mm). 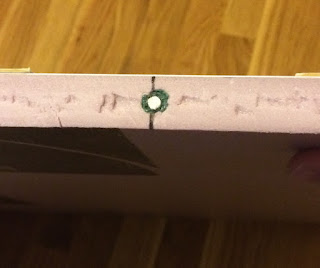 Another embellishment for this project was magnetization. I tried gluing some small rare earth magnets into the edges of each board to help them grip each other on the table. If successful, it will help them stay aligned during game play. The magnets I used turned out to be a bit too weak to hold the completed boards securely, but I will absolutely try again in the future. 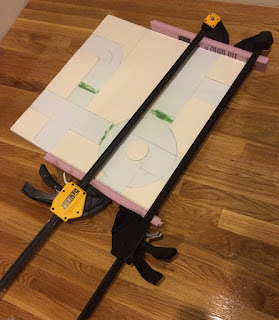 The last step in assembly was to cut strips of 0.010 styrene to plate the edges of the board. As with many glues and putties, the solvents used in spray paints will melt pink foam insulation, and the edge-plating provided both a smooth surface, and protection for the base material, shielding it from the spray paint.
Posted by klarg1 at 9:25 PM