I had some extra white paint left in my airbrush after base coating a whole batch of Firestorm Armada flight bases. Rather than throw it all away, I decided to take a crack at "Zenithal Highlighting". I grabbed a black-primed Battletech miniature off the shelf and tossed into my spray booth to give it a shot.

Zenithal highlighting is the technique of applying paint from the top of the model (i.e. from the zenith) so that only areas which would be directly illuminated from above get any paint. The expectation is that you will get something which is black on the underside and white in all the well-lit areas, which is precisely what I have now: 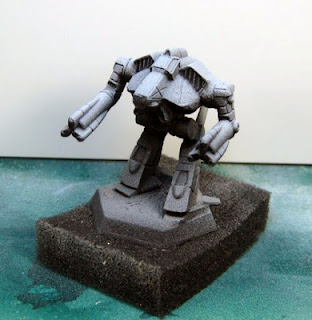 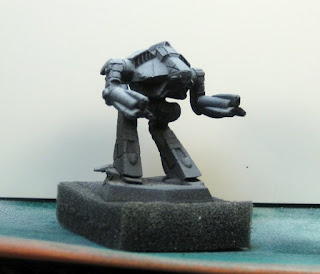 Now I need to translate this base shade into a finished paint job. I was originally planning to paint this miniature with some kind of camouflage paint scheme, but, perhaps, a more solid-color scheme would work out better for exploiting the undercoat.
Posted by klarg1 at 5:37 PM