Last weekend was Total Confusion XXVI. For the uninitiated, TotalCon is the biggest gaming convention in the Northeastern US, and, as such, is the biggest one within easy driving distance of my home(*). This is the first year I have attended the con purely as a player and attendee, not as a Game Master, and I made sure to dive in head first to enjoy what was available.

I spent most of Friday playing assorted board games in the 'Board Room'. TotalCon always has lots of board game events going on including both tournaments and introductory teaching games. I'm not much of a board game tournament player, but I made sure to hit a new game with each two hour slot. I don't think I've played that many new games in one day any other time in my life.

Saturday morning, I played in an ongoing Pathfinder game, run and maintained by a local area GM. This was my first crack at the Pathfinder system, although I did play D&D 3.x back before the advent of 4th Edition D&D. Suffice it to say that the GM did a fantastic job and everybody seemed to be having a ton of fun. I will definitely try to get into more of his games in the future.

The remainder of Saturday was devoted to Battletech. TotalCon has a surprisingly and pleasingly rich set of Battletech offerings most years. I spent most of my time in the grinder event run by our local demo agent, but the scenario events at the next table looked like they were all packed with players and generally successful all around.

Finally, I even managed to get some painting in at the "Paint 'n Take" table Sunday morning. The person running it offered a pre-primed miniature for each ticket spent, and provided paints, brushes and advice to anybody who felt like sitting down to paint. I managed to finish a character model, suitable for any fantasy RPG, and I got started on some kind of wraith / Ghost model, although I didn't come close to finishing it. 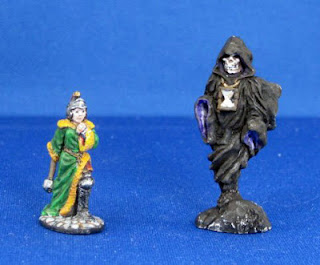 It's certainly not my best work ever, but I had fun painting in a social situation, rather than alone at my home painting table. I have to say that I'm actually kind of taken with the wraith model. I'm thinking of stripping the paint and re-doing it nicely with a proper base and better glowing effects from within its robes.

All in all, I had a blast at TotalCon. I got to re-connect with some friends I hadn't seen in a long time. I played a *ton* of games, running from 8AM to 11PM straight two days in a row. I'll need a couple of days to recover, but you can bet I will be back next year, if at all possible! 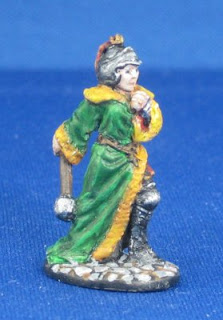