Battletech Conversions - Second in a Series

Today, I thought I'd post another Battletech model build. This time, it's based of the newest Atlas sculpt from Iron Wind Metals. This is the first time I've built this particular sculpt, and I have to say that I like it - a lot. It's proportions are not quite as nice as the original '80's sculpt, but is much more substantial, and its many parts make conversions and re-posing much easier to achieve. (I'm leaving out the middle "stretch" Atlas from the '90's. I am not a fan.) 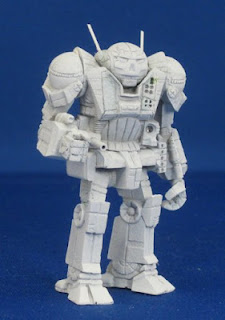 In this case, I decided to build the 'mech as an Atlas AS7-S, which is not one of the best versions of the Atlas in terms of game play, but it is unusual, and it fits nicely with one of the units I am building.

One thing that stands out about this Battletech icon is the sheer number of parts that come in the blister. I have to assume that many of them, like the separate back plate, are there to make casting easier. Even so, casting the 'mech's hands as separate parts did seem a touch excessive, even to me. 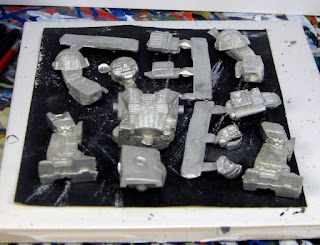 I started out by assembling the legs and hips into a stable platform. I took my time and carefully propped the parts in position during this process so the epoxy would have plenty of time to cure and form a strong bond. 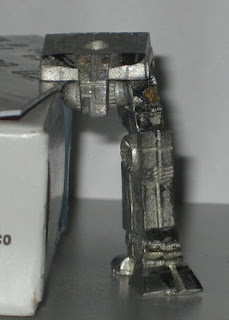 I was also trying to give the 'mech an appealing stance. In the case of the Atlas, I went for a wide, stable position. I find that turning the legs outwards so the feet are slightly spread, and not pointing in the same direction adds a surprising amount of life to a standing model. Some of the more static battlemech sculpts can be improved to a surprising degree by small changes in their posture. 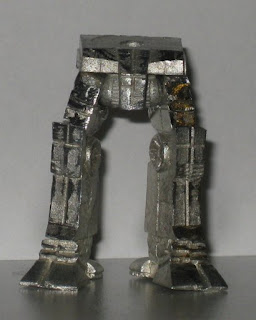 While the legs were curing, I started working on the torso. The first things that had to go were all the extra missile tubes in the torso. As far as I can tell, the AS7-S preserves the rapid fire 5-tube launcher from the original AS7-D, and I refuse to let 20 years of subsequent artwork and miniature sculpts stand in my way.

A touch of green stuff was all it took to erase the sculpted tubes. Since the hip-mounted launcher is, conveniently, cast as a separate part, it was a simple matter to pull out a razor saw and cut away the superfluous sixth missile tube, leaving the desired 5-tube launcher. 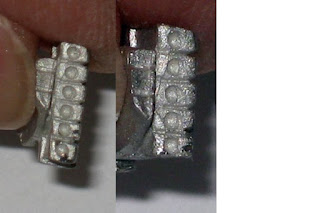 While I was at it, I also replaced the model's Gauss/Autocannon barrel with a section of brass tubing. I felt it provided a cleaner look, and it was a much less fiddly part.

With all that behind me, I set about re-posing the model's right arm. I wanted to bend the arm into a "shoot from the hip" posture. True, in the 7-S model, the gun mounted on that arm is just a medium laser, but I like the attitude. To accomplish this I had to slice the arm in half at the elbow. 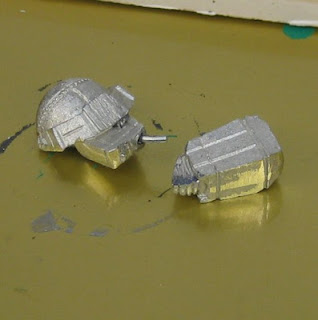 Since the new angle would leave very little attachment surface area, I inserted a steel pin to strengthen the joint, inserted it and glued the two halves back together in their new orientation. 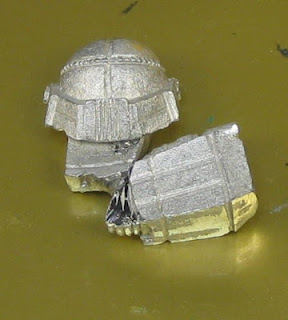 Once the glue was fully cured, I filled in the gap with putty. I did *not* try to sculpt the initial blob of putty, I just filled in the elbow. That filler formed the base structure that supported the sculpting that came later. 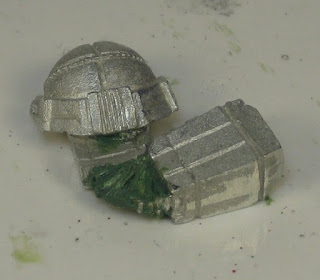 Once the basic structure was in place, I began slowly adding in tiny amounts of putty to form the weather seal covering the 'mech's elbow. It is hard to sculpt the grooves required into a large area of soft putty; the putty tends to fill in the existing grooves as you push it around to carve new ones. I ended up using a combination of techniques:
• I sculpted each 'ridge' in the weather seal individually on the side of the arm facing the outside. I had to let the putty cure between sessions so I wouldn't damage old sculpting while creating new.
• On the other side, I took an easier approach. I filled the whole area with putty and then later filed grooves into the cured putty with a triangular needle file. This technique doesn't produce quite as fine a line as the other, but it is much faster and easily good enough for the side that will be held against the body. 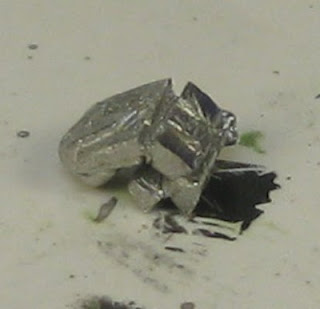 The last thing I did before starting final assembly was to bend the fingers of the right hand into a fist. To get the fingers to bend, I took a jeweler's saw and carefully cut about 2/3 of the way through the knuckles. After that, the hand could bend fairly easily, and would bend at the right places. I then carefully squeezed the hand shut using a pair of smooth-jawed pliers. I didn't manage to get a really tight fist, but I think it looks pretty good, and it fits the pose nicely. 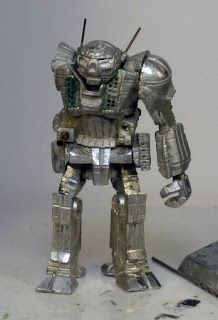 After I was satisfied with the shape of the right hand, I added some putty to fill in the gaps in the knuckles of the fingers. I didn't do anything fancy here, just some filler to be painted like metallic parts later. After that, I assembled just about the whole model. I also drilled some new missile tubes into the left torso to represent the 10 SRM tubes mounted on the 7-S model Atlas. The new missile tubes are arranged a bit differently in the new layout to reflect the separate launchers making up the 'mech's missile array. I am not 100% satisfied with the SRM6 at the top, but I think it will look pretty good once it's painted.

The only part I left off was the right arm. The pose brings it very close to the body, and I want to be able to paint the torso and arm separately before I finally glue them together. 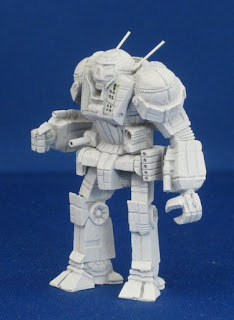 I did cheat and use some poster hanging putty to stick the arm to the body for the photos of the finished and primed model, but it's still not glued. Hopefully I can find time to finish painting it this Spring, and post the results when I do.
Posted by klarg1 at 9:21 PM