Spartan Games has started to roll out a new wave of models for Firestorm Armada. The first group came out this month, and I've obtained a selection of the latest Zenian League support fleet models to support and expand my Dindrenzi fleet. 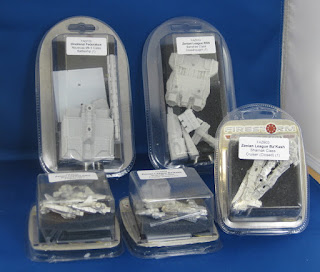 I have not had time to look over all of these models in detail just yet, but they all look pretty cool. Spartan continues its string of appealing and varied ship designs. I did break open and assemble one of my new Ba'Kash Sharnak cruisers. The rest of this post contains my thoughts and evaluation on the 'Open' version of the Sharnak. Over the next few weeks, I will try to post some pictures and information about the others, as time permits.

The Sharnak is an ambitious model. It is available in two different versions. One that resembles the rendering on the ship's stat card, and an 'Open' version that has all four of the ship's arms splayed out in an attack configuration.

The ship comes in five pieces, plus an extra-long flight base to balance out the very front-heavy model. It's unusual, for a Spartan model, in that most of the ship is metal; only the small central hull/engine section is made out of their signature light grey resin.

As with all of Spartan's newer ships, this one comes with a large, square stat card, rendered in full color and featuring an image of the ship. These newer cards are pretty, but I don't like them. The tiny older cards were boring black and white tables, but they were easy to pack into a card sleeve or deck box, and all of the ship's stats were visible at a glance; the new cards hide a bunch of information on the back of the cards. Booo! 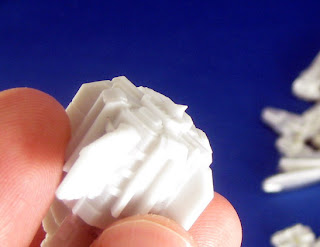 As expected, there is some flash and additional pour resin attached to the resin part, but, as usual, Spartan did a pretty good job of making sure those flaws are in places that are reasonably easy to clean up without hurting the ship's detail. A little patience and a sharp hobby knife should remove most of the excess resin with no problems. 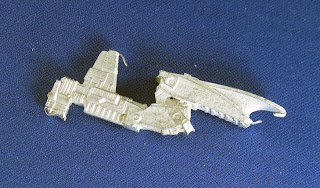 The metal parts are about average for the industry. There is a small amount of flash, and a minor mold line that runs all the way around the perimeter of each arm. I spent some time carefully filing away the lines on each arm, but it was no worse than any other white-metal piece. 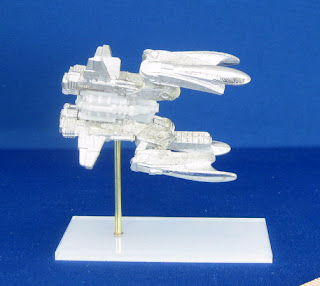 I epoxied the arms, one at a time, to the hull. I found assembly to be a little harder than some other Spartan models. The issue is that you have to make sure to align each arm properly with the body, and with each other, but they do not fit very tightly in the sockets that hold them on the hull. In the end, I went with a slower setting glue (5-minute epoxy) and sat there aligning each arm by hand until it looked good... and then for several more minutes while it set. 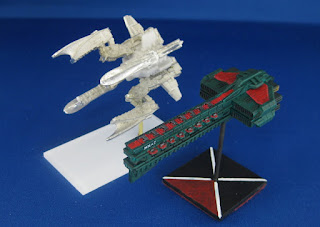 The ship is about the size of the larger existing Firestorm Armada cruisers, perhaps slightly larger. I really love the look of the open model; it conveys a very aggressive feel to me. I'm thinking of trying out a more colorful paint scheme than the ones I've been using for my other Zenian ships.

There is one fly in the Ba'Kash ointment, and that is the ship's price. The closed Sharnak is priced at a wallet-straining $21.99, which is already more expensive than any previous base-model cruiser, but even that is surpassed by the budget-busting $29.99 price tag on the open version, pictured here. 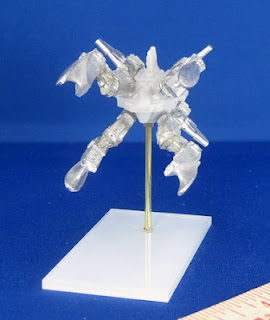 The prices are understandable, given the amount of metal involved, but they will give you quite a sticker shock if you are used to the rest of the Spartan Games line. I wound up purchasing two of the closed ships, and only one open one to fill out my squadron. I love the look of the open cruiser, but it's a lot of money for a ship that only fills up 60 points of your fleet roster. 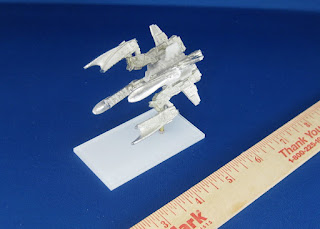 In summary, I am quite pleased with the design of the Sharnak cruiser, and the quality is right in line with Spartan's other offerings, but the pricing does leave something to be desired.
Posted by klarg1 at 11:05 PM