This is my last entry for Spartan Games' March releases, and it's not even May yet!

This time, I'll be talking about another ship from the Zenian support fleet: The Banshee Dreadnought. As with all of the minor powers releases to date, the "Rense System Navy" has a unique look, lending a lot of variety to the Firestorm Armada lineup. The RSN is a member of the Zenian League, meaning that I can add RSN ships to my Dindrenzi fleet using Sparan's "Alliance" fleet construction rules, but  with the release of this dreadnought and a new frigate model, the RSN has almost enough ships to be played on its own as a faction in its own right! 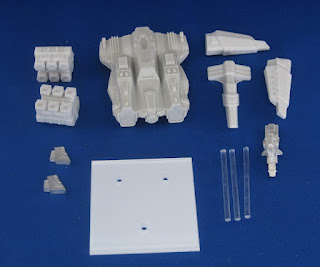 The Banshee comes in nine parts, plus an unusual four part stand. I was surprised at the part count, given the size of the ship; most of Spartan's latest releases have tended towards relatively few pieces.

The parts include the main hull, two bow 'arms', a 'chin' piece, two fins, the bridge superstructure and two blocks of engines. Spartan has once again placed the pour stubs for the parts in convenient places that will (mostly) be hidden once the model is assembled. There are four on the back of each engine piece, and two more, larger ones on the back of the main hull, where the engines attach. Sadly, there is also a minor pour stub along the grill that lies between the engines. I was able to sand that down without hurting to the detail, but it was as not as easy. 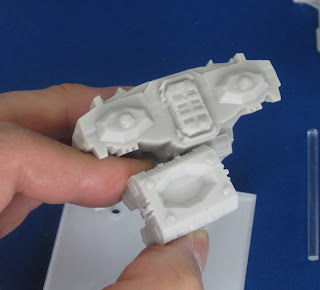 One thing you may note is that the recesses on the engine part is not centered. The parts can fit in either of two orientations, but I am fairly certain that they are meant to be oriented with the socket closer to the bottom of the ships hull. That means that I am holding the part upside down in the picture above. 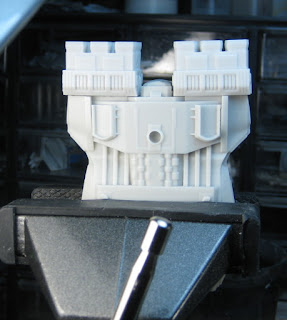 I cut away the extra resin and glued the engines to the hull. Since the fit was so close and flat, I decided to use an epoxy resin, rather than super glue to hold it. I clamped the whole thing in a vice and left the glue to cure for a good half an hour before moving on. 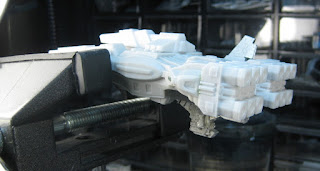 Assembly proceeded smoothly after that. I added on the bow 'arms', bridge and tail fins. I did add some putty to fill in around the fins, as they are much narrower than the horseshoe-shaped socket into which they fit. The chin piece attaches very easily, but you will have to align it yourself; the attachment area is just a smooth, flat surface with no obvious guides to help position it. 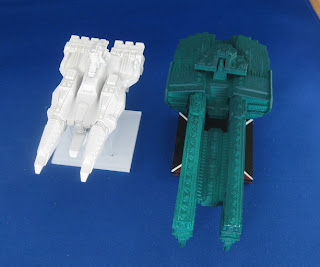 I was surprised at how small the Banshee is. It is much closer to the size of a Firestorm Armada battleship than a dreadnought. It is positively dwarfed by my Dindrenzi Retribution class dreadnought, in spite of sharing the same ship class. Still, I love the design. The ship has a very 'Anime' feel, and it speaks to the '80's anime fan inside me. The casting quality is very good, and, aside from a few minor gas, the ship fit together beautifully. I can't wait to paint her. 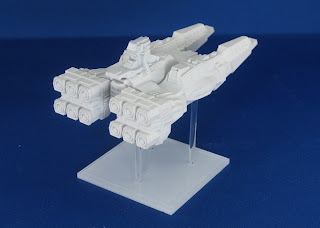 Above you can see the engines aligned across the stern of the completed model, and below I have included a shot of the ship's business end: 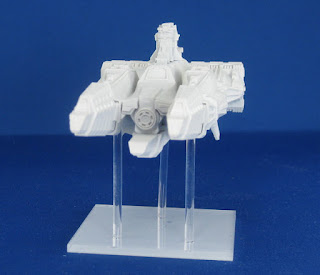