I had some spare time sat down to assemble my Dindrenzi Mk II Battleship. So, as promised, here is a brief overview of this recent release from Spartan Games. 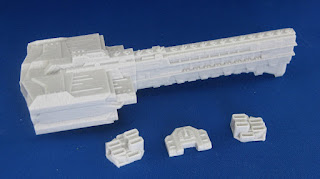 The model comes in five parts, plus a large, square base: The main hull, a boom for the primary armament, two engine plates that fit onto the rear of the ship and a small bridge piece that fits on top of the superstructure. 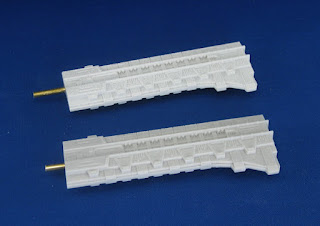 After a side by side comparison, it looks to me like they are from the same mold. Not a bad idea, but I miss the gap and second tier gun deck that is featured on the older Conqueror Battleship. It was distinctive, and fit the concept of their broadside 'gun rack' very nicely.

The mold quality is good, and the parts are much more detailed than the original Firestorm Armada releases.

I do have one quibble with the sockets that are meant to house the engines at the rear of the ship: The pour stubs for the ship's main hull go through these sockets. At first glance, that seems like a great plan - once the engines are attached, the ugly stubs will be covered up completely. The issue is that, in order to get the engines to fit correctly, you have to sand the pour stubs flat. Unfortunately, those stubs are recessed inside the engine sockets, meaning that you cannot reach them with a conventional straight file without sanding off some of the hull detail around the engines. 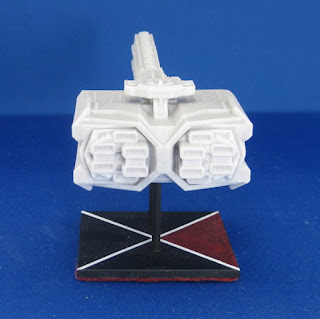 Fortunately for me, I have a small chisel that I could use to scrape away the stubs without damaging anything, but it is not a common tool for miniature gamers (yet). 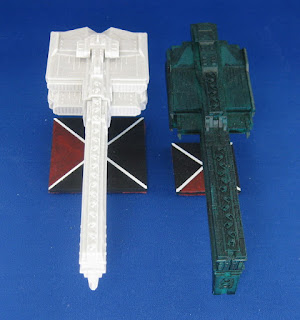 The Nausicaa, as the new ship is known, is almost exactly the same length as the old Conqueror class, but she has a broader beam. The switch to a large-size base seems a bit odd to me, given that all previous Firestorm Armada battleships used the smaller size, but that's what came in the blister. 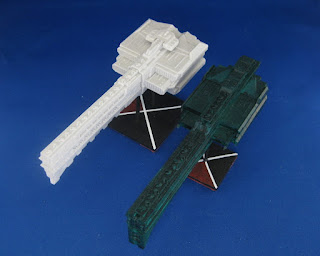 Once mounted, the ship is supported by two posts, aligned in a fore-aft configuration. That alignment is rotated ninety degrees, when compared to the Retribution. That change is why you see the strange off-side highlighting in my photos - I have not yet assembled the base for my Nausicaa, so I borrowed the base from my dreadnought for the pictures.

I still need to apply some putty to the seam between the boom and the hull get her ready for primer, but that's all for now!
Posted by klarg1 at 9:41 PM