So, what have I been doing for two weeks?

Like many hobbyists, I have several projects going on in parallel, stealing my time and attention from each other. I thought now might be a good time to give an update on a few of the projects that have appeared, or been hinted at, on this blog. 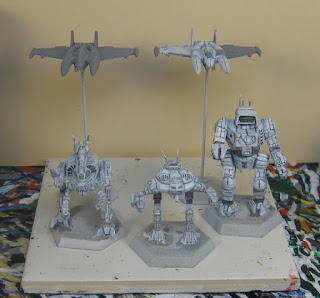 I have been working on a large unit of Comguards for my Battletech forces for a while now. Generally, I will pick up 3-4 models and paint them up in Comguard 'colors' every so often and add them to the growing pile. Lately, I have been picking up the pace, as I am past the half way mark towards assembling a complete Comguard level III force, and I am eager to see it through.


(If you are not familiar with the Battletech Universe, you can think of this as a battalion level unit.)

Once I complete the 'mechs shown above, I will have three full level II battlemech formations, although I have yet to figure out precisely how to split them up into coherent forces. 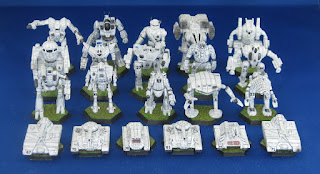 I started my unit as an excuse to paint up some of the Star League era battlemechs from FASA's Technical Readout 2750, but, since then, the project has gained a life of its own. I currently plan to add a level II of aerospace fighters, and another armor unit, but whose to say it will stop there?

Next up is my continuing work on a Firestorm Armada Dindrenzi Federation fleet. Since my last update, I have added a squadron of frigates and a solitary gunship to the rolls of my painted fleet. I have also constructed a few custom fighter tokens using some Falkosi Light Fighters, left over from the Babylon 5 Wars game by Agents of Gaming. I have several ships in various partially painted stages, and, of course, some completely unpainted models. My goal is to get one more gunship painted before the end of the month, and then get the whole lot onto the playing field for a fresh series of games. If I have some extra time, I may try to finish an escort squadron as well. 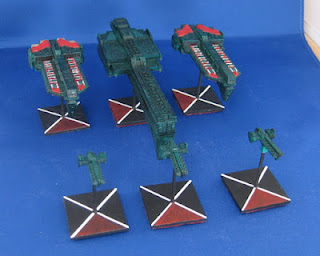 Finally, I have completed a long-running terrain project. I have been working on a set of Battletech hex terrain using the same materials and techniques that I used for my photography terrain. To create the hexagons, I crafted a custom template for laying out the hexagons and carefully traced them onto the terrain before assembly and painting.

Last month, I was able to put the finishing touches on my six prototype game boards and  arrange to play a small lance vs. lance battle against a friend of mine. The scale worked quite nicely, and the boards provided an attractive play surface, compared to a cardboard map. 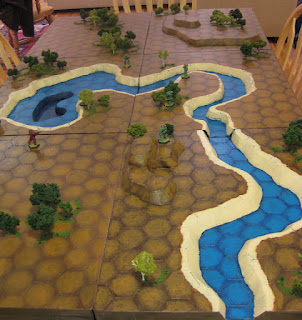 I am quite pleased with the results for a first try. If I decide to move on to a second batch of terrain, I would like to find a way to toughen the surface. These boards can handle metal miniatures tromping across them quite well, but a hard-thrown die can still leave a small dent in the foam board. 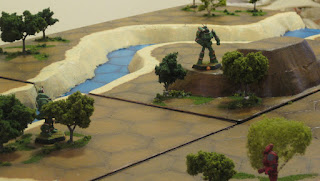 Once I have my technique perfected, I would very much like to try building three dimensional versions of the battlemech arenas from Solaris 7. That would make for an exciting match!
Posted by klarg1 at 11:17 AM