I've done a number of assembly and conversion articles, but I haven't commented too much on the stuff that makes such things possible: glue. No miniatures enthusiast gets very far without picking up some handy adhesive that will bond tiny parts together. I thought it might be useful to post a brief survey of my favorite forms of stick-um. 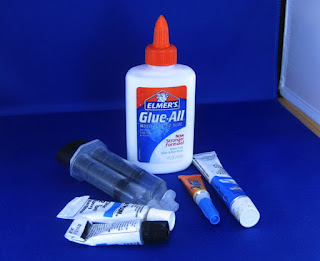 In the course of my work, I have used many such glues, but there are a (relatively) small number that I return to again and again.


The basic go-to glue for most modelers is super glue, or cyanoacrylate (CA) glue. It's readily available, fast acting, and it bonds to darn near anything. I am a bit unusual (I think) because I actually tend to shy away from super glues for much of my work. My chief complaint is that super glue has very poor shear strength. You can pull against a super glue bond all day without hurting it, but if you hit the part from the side, say, by dropping it off a table, I find that the joints break relatively easily. 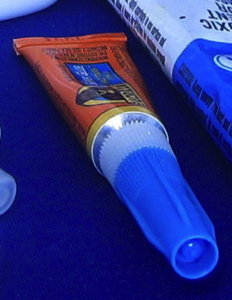 There are, never the less, still great times to use super glue. It is great for bonding really small parts. There are some very thin super glues out there, and they can flow into a small space to attach tiny parts quickly and easily. That same thin consistency means you won's have a whole bunch of extra glue leaking out around the joint, ruining your clean seam. One thing I will say for super glue is that it bonds resin-to-resin like no other glue I've tried.

Another, unusual, use for thin super glue is to harden epoxy putty. Many putties are available, such as "Green Stuff", which can make valuable gap filling or sculpting media. Most putties harden to a firm and tough, but not rock-hard consistency. Applying a thin layer of CA on top will produce that tough, hard layer which you can later sand smooth, if needed.

I generally avoid gap-filling super glues because I usually use other products to fill that role. On option is to glue together a joint and then later fill in the gaps with green stuff. Another option is to use another glue entirely: 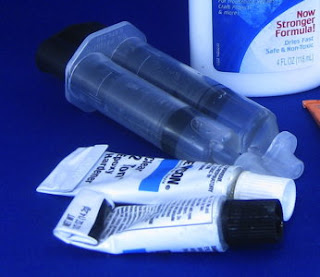 Five minute epoxy is my go-to glue for most miniatures joinery. While not as easy to get as super glue, two part epoxies are available at pretty much every hardware store. They pretty much all come in the form of two tubes of viscous liquid. One is the epoxy resin, and the other is the hardener. When mixed in equal measure, they start to set up. The mix will set in anywhere from thirty seconds to an hour, and will cure fully in somewhere between thirty minutes and twelve hours, depending on the type you buy.

I find five minute epoxy provides me with just enough work time to arrange parts and set things up how I like them, while not driving me batty waiting for things to set. It is possible to hold a joint together with your fingers for 2-3 minutes while the glue sets. That is not so easy for twenty minutes or more.

I find epoxy to be more durable than super glue with normal gaming wear and tear. The reduced speed of sticking is both a blessing and a curse. It's nice to have a few seconds to adjust a part's fit after applying the glue, but it can be annoying to have to stabilize that part for a few minutes while the glue sets.

Epoxy is usually pretty viscous and therefor fills gaps quite well. The down side is that you can make quite a mess of things if you use too much. You will also need a disposable surface on which you can mix the two components of the glue. I usually use the plastic portion of miniatures blister packs, but almost anything will do.

Epoxy does release fumes as it cures, so be careful about breathing too much of its vapors. I would also recommend cleaning your hands thoroughly after using it. 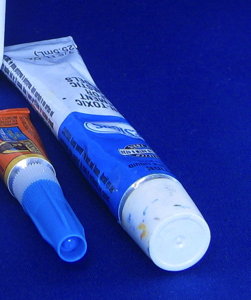 Plastic cement is a specialty product, but very useful. It works my "melting" plastic and allowing two parts to fuse together as the cement cures. Most cements are quite fast acting. Plastic cement can only glue plastic to plastic. It works on both styrene and dense ABS plastics, but not some other materials, like acrylic or resin. High quality plastic models are becoming more and more common in the gaming industry, so this stuff is likely to get more useful over time, rather than less. A word of caution: Plastic cement releases some serious fumes while it is curing. I don't know whether it is more or less poisonous than epoxy, but it sure stinks worse. Try to use it in a ventilated space. 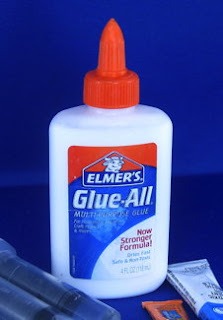 The last glue that I always keep on hand is basic craft glue, or polyvinylacrylate (PVA) glue. Many people will be familiar with it from elementary school. It sticks to a wide variety of things, and it is very cheap.

I, like a lot of other modelers, use PVA glue primarily for sticking things to bases or for gluing together terrain pieces. It does not stick well to metal, but it does bind to porous materials, which includes a large number of basing materials. It is also pretty thick, so it is sometimes helpful to dilute it with a little water before using it. Thinned PVA is a great way to stick basing grit (sand) to a miniature to add texture. Note that PVA is slow to dry, and only gets slower when thinned.

I have used a variety of more specialized products, and I will use them again in the future, but this brief survey of adhesives covers 90% or more of what I use. Of course, every modeler has different preferences.
Posted by klarg1 at 11:34 PM