The thing that I have most enjoyed about ReaperCon, the two times I have been there, is the social camaraderie of sitting in a room full of painters. First off, it is nice to just have people to talk to while you are hunched over a tiny piece of metal or plastic, focusing on some fine detail.

Even more than that, it lets you swap stories, share ideas and give mutual advice with people who share your interest. There are local paint clubs in various areas, but I have not, so far, belonged to one in my own home town.

This year, I decided that I should go out and try to create the thing that I desire, rather than sit at home and bemoan its absence.  Upon return from RCon I set the wheels in motion to pick a time and lure some people in to paint, hang out and socialize.


One thing I have been doing lately, is playing Pathfinder organized games at one of the local game stores. Very few of the local players at that store use painted miniatures, but there are a few, and I know that at least a handful are awaiting Bones figures from the Reaper Miniatures Kickstarter. In the hopes of drawing in this very demographic, I set up my inaugural session for a weekend afternoon, right after the end of the Pathfinder games for the week. I also took care to make sure that the players were aware that I would be there with paint, tools and even a few prepared miniatures to borrow and experiment upon. 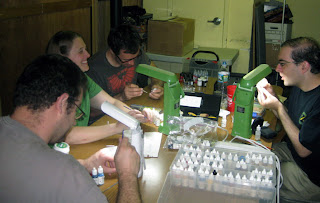 I am pleased to report that things went well. Several people showed up, and even more expressed some level of interest. I don't know what will happen next time, but I consider this an auspicious and promising start. We'll see what develops.
Posted by klarg1 at 8:51 PM

Email ThisBlogThis!Share to TwitterShare to FacebookShare to Pinterest
Labels: planning