Patience is a Virtue

I have never worked on a substantial sculpting project before. I never really had to deal with the patience it takes to watch putty cure. It's almost exciting as paint, but it's much more monochromatic. Even so, there is something pretty satisfying about watching a three dimensional object slowly take shape, one tiny patch of putty at a time. 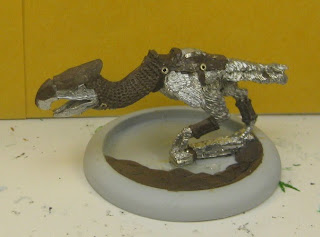 After last time, I had just about completed the chain barding along the bird's neck. You can see that I had also installed a series of brass loops along the armor and gear to attach to the straps and belts later on. 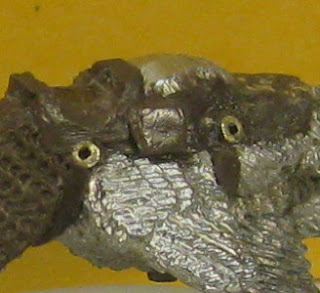 Then, the slow build-up began. I started out by experimenting with a small pouch added to the side of the saddle. I started out with a tiny blob of putty shaped into a roughly square base shape and then... 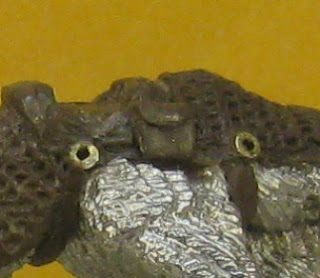 Waited a few hours for the base to cure. Once it was firm enough to take some additional sculpting, I added on a tiny amount of extra putty to form a flap for the pack. Of course, I didn't want to accidentally bump it out of shape or finger print it, so...

I waited a few more hours. I don't have a specific picture of it, but I later added in a little clasp to hold it shut on the road.

Of course I didn't sculpt everything from scratch. I still had the quiver that I cut off of the rider model, and I pulled out a plastic adventuring pack from my bitz drawer. I didn't want all of it's components, but I did select one of the two pack bags and the canteen from the side of the rig to add on as pre-made details. 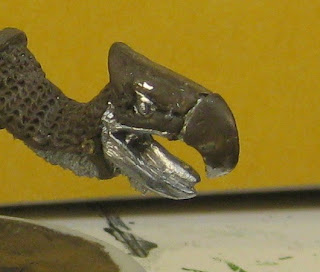 Like everything else, the head armor took many steps to complete. If you squint, you can see where I started to add a fastener between the top of the head armor and the lower plate, beneath the eye. I had to try that a couple of times before I was happy with it. 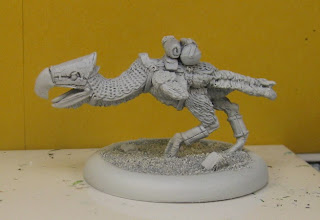 When I got close to done, I hit the miniature with a light coating of primer to blend the materials together, and give me a better picture of what it looked like. 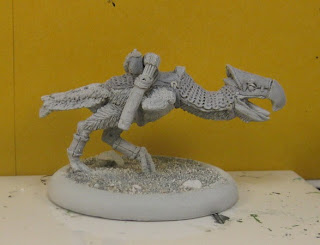 There is a little cleanup to be done, but I am pretty happy with it for my first major sculpting conversion. I need to do more of these projects to improve my skills (or at least, keep from losing them completely).