Not too long ago, I posted this image as a teaser for a future project: 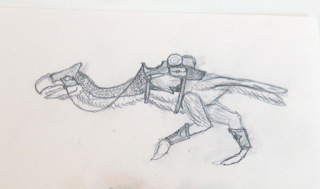 That project is now underway as a grand experiment in sculpting and conversion work. 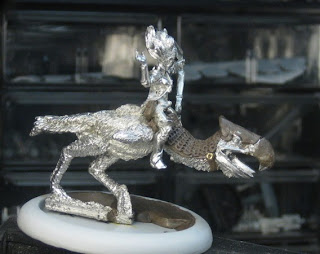 I decided to set out on this project as a way to stretch my sculpting skills. I have done a number of conversion projects, and I have used putty to reconstruct damaged or incomplete miniatures in the past, but this is, by far, the most extensive reconstruction and modification project that I have undertaken to date.

It has been fun so far, and it brings me one tiny step closet to being able to sculpt a whole part, or even a whole figure, from scratch. 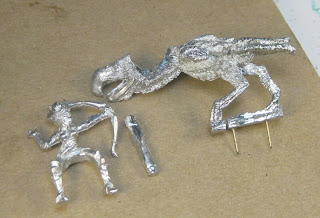 The parts for this project consist of an Axe Beak figure and a mounted archer, both from Reaper Miniatures. These two models are not, in any way, designed to work together, so I am working on some pretty extensive structural changes, in addition to the additive work of placing a saddle, barding and gear on the bird itself. 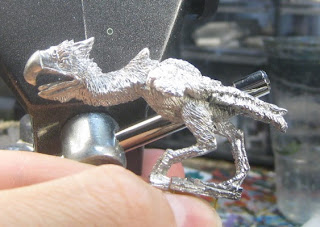 The first step for the axe beak was to bust out my Dremel and grind off most of the feather texture from the top of the figure, along with most of the top of the head and neck. I will be building this detail back up later with armor and saddle detail, but, in order to keep things in proportion, I need to replace metal, not add to it. 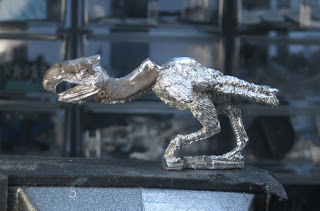 As you can see in my concept sketch, I wanted a layer of chain barding along the mount's neck. I started out by placing some putty along that area to form a blanket or padding layer under the chain and to build up some of the shape for that area. The chain will come on top of this layer.

The next step was to start sculpting chainmail - a daunting prospect for a newbie like me. How was I supposed to sculpt all those dozens of little rings!?

I did a Google search for how to sculpt chainmail and found with a relatively simple Tutorial. Thanks, miniatureTim!

I immediately set off experimenting with some spare putty, and, before long was able to produce passable results. The only problem was that my rings were oversized because I didn't have a nice, small tool for sculpting it. 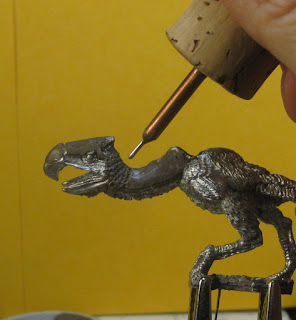 I cobbled together a crude tool out of an old wine cork, brass tubing and a bid of paper clip. Once I sanded the end of the paper clip wire to a rounded shape, I was able to set to work right away, and the results were not too bad.

That's all I have time for this time. I will try to post another update on the head armor and rider soon.