I made lots of progress on the Hawkman WIP last week. I started painting in his sword. I painted the trim on his robe. I even started in on some experimental basing techniques - more on that below For now, here is his state, as of last week: 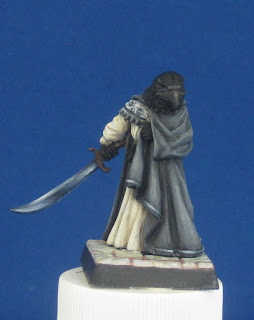 Read on for tinkering with base-painting

As I mentioned in my last post, I mounted this figure on a pre-cast resin base that was textured like a series of rectangular, stone tiles. A little time spent on Google yielded several different techniques for painting a marble texture, and I wanted to try it out. 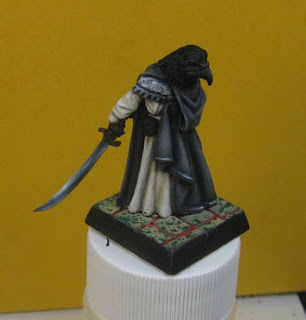 I started out with a yellow-sand color as the base. I intended the end product to be nearly white, but I was hoping that a little bit of yellow tint would work well with the yellow-cast in the figure's robes. On top of that base, I sponged a dark grey-ish green. I know it looks a little odd now, but stick with me. 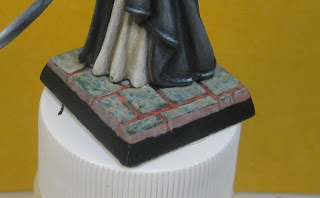 I began the process of painting over the base colors with a very thin, translucent ivory surface coat. The plan, using this technique, is to allow the contrasting green and yellow to be almost, but not quite entirely, covered up by later layers. 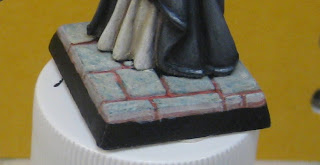 At the end, The under-paint shows through as a subtle variation in the surface texture. It was very slightly less subtle than it looks in the picture, but not tremendously so. 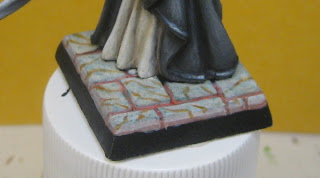 Once I had my marble background, I got to start gently inking in some veins. I used a very dilute orange-brown for the base. The thinner the paint, the better, provided you can keep it under control and don't allow it to flow all over the base, like a wash.

In the interest of full disclosure, this is where things when a bit off the rails. Orange-brown really was not the most ideal choice for this figure's color scheme, but I believe in reporting both mistakes and successes on this blog, so this is what I really did. 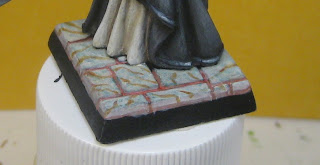 In another subtle, yet important, step, I added some darker orange-brown to deepen the color of the veins, but not everywhere. I tried to apply it only to the middle of each vein, and not along the whole vein. The goal is to achieve a natural sort of unevenness.

At the end of the process, I added some additional ivory and white paint in another uneven layer. I allowed that layer to partially obscure some veins, but I kept it mostly on the whitish parts of the "stone". 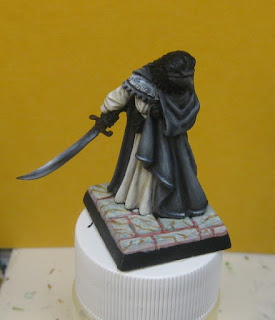 At the end of the day, I really like this technique, but I needed to re-think the colors involved. Next time, I will discuss correcting the problem and try to include some pictures of a completed miniature.
Posted by klarg1 at 1:39 PM