As is probably clear from my past updates, the majority of my painting projects are more or less "conventional" single-figure sized miniatures. The largest things I commonly paint are usually Battlemechs, which are bigger than your average 32mm "heroic" figure, but are still not titans in the miniatures world. 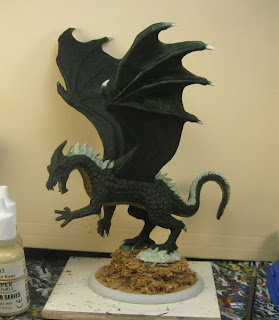 With the arrival of my Bones Kickstarter I am awash in inexpensive plastic miniatures, including a variety of large monster models, perfect for terrorizing PCs in fantasy role playing games. Given the low cost of Bones (especially at the KS rates), I wanted to try my hand at painting a big model, so I buckled down to paint "Deathsleet", the Ice Dragon.

Deathsleet is properly sized for a "huge" sized monster, in modern D&D/Pathfinder parlance. That is to say, that, a casual test-fit showed that he sits nicely on an 80mm round base, which is just about perfect for occupying a 3x3 area on a one inch, square grid - certainly neither a model, nor a monster, to be trifled with. 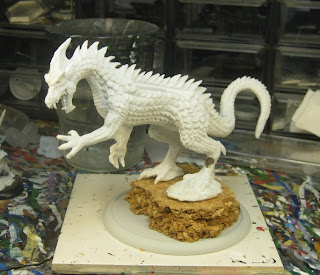 One may note a patch of green stuff on the model's left leg. That patch is covering up a hole that I put in the leg while installing a hefty brass pin that runs the  whole length of the lower leg and down through the height of the base. Sadly, the plastic version of Deathsleet has a habit of bending over time, to the point that his fore-claws can touch the ground. With any luck, the brass post will stiffen up his posture and keep him upright. 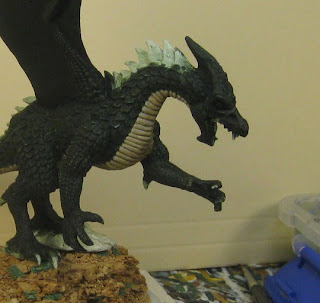 After applying a dark green and orange-yellow base coat to the majority of the miniature, I set about applying a basic shade to the belly scales. I decided that, as my first, true, dragon model, I wanted to aim for a good table-top level of paint. I am not expecting a competition piece here. (That will come later, with a future project.) 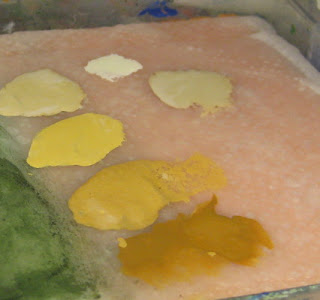 I don't know if it helps, but I the above shot shows the set of paint colors that I picked out and mixed for painting and shading the belly scales to generate a yellow-white finish. 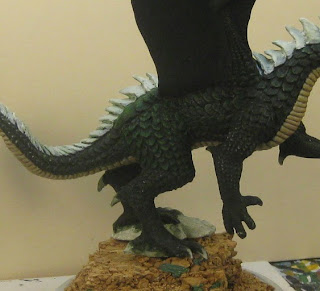 Since then, I have started to shade the scales from dark green through yellow-green. In some of the veyr brightest areas, I have included pure yellow highlights along the edges of the scales. I started along his right flank, but I still have quite a way to go. We'll see whether I finish or go mad first.

In other news, Reaper Miniatures has announced that Bones Kickstarter, Round 2 will take place some time this fall. I am living in fear.
Posted by klarg1 at 11:01 PM