Not long ago, I posted about the contents of the new Robotech RPG Tactics box. In this entry, I will take a detailed look at the models that come with the game. I will preface this review with the comment that I grew up on giant robots, including Robotech, so you may take as a given that I love the overall aesthetic. 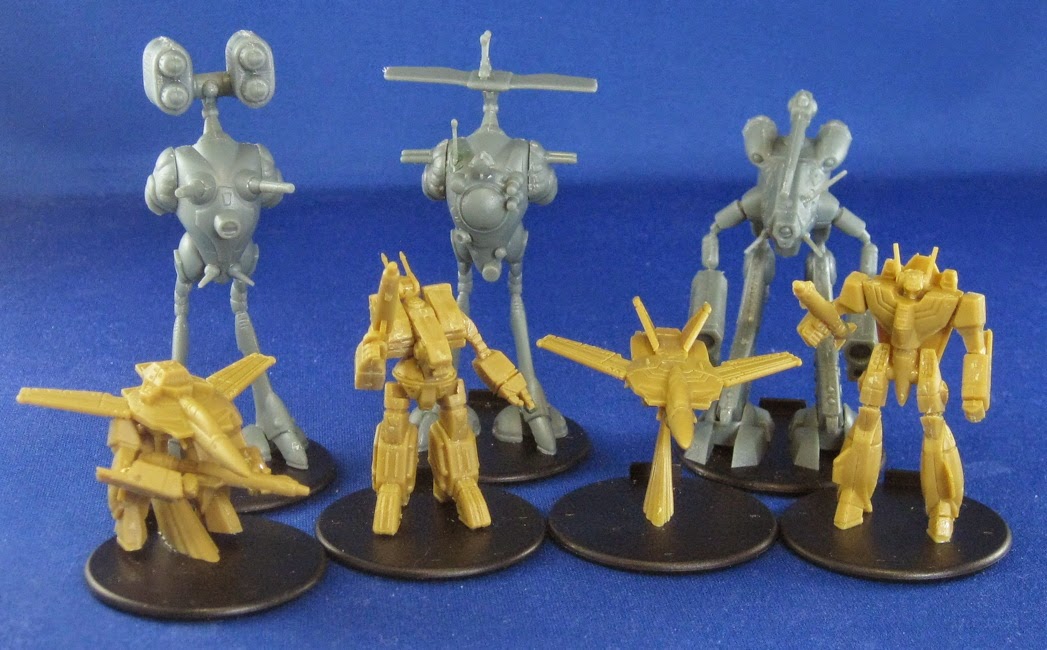 Pictured above is what I have assembled while writing this review. Not shown are the three other UEDF destroids that came in my shipment (Tomahawk, Defender and Phalanx) and the basic-model Regult pod that you see blowing up in every Macross battle scene ever.

The current version of the game includes everything from the Macross portion of Robotech. I expect that they will move to introduce mecha from Southern Cross and Mosapeda if the game takes off, but it is far too soon for me to predict if that will happen. Personally, I would go for some Cyclones and Invid troopers. 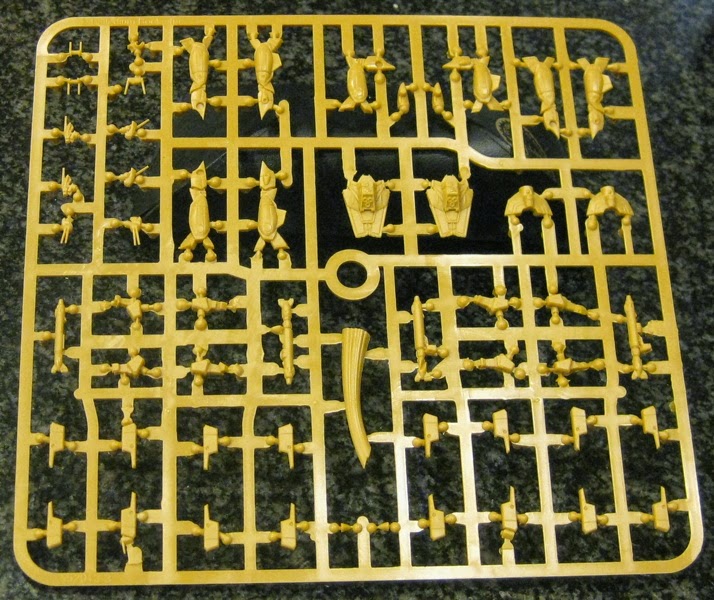 Each sprue comes with a huge number of parts for one type of mecha. The one shown above has enough parts to build two UEDF Valkyries, in Battloid mode. There are enough parts for a couple of pose options, including a single flight stand to allow one of them to be posed in an airborne jumping position. There are also different heads available to represent every possible variant on the basic VF-1A. 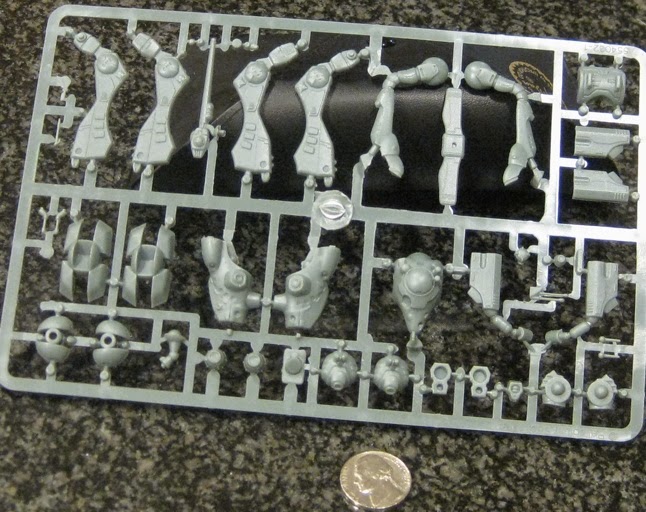 Every rule has an exception, and the Zentraedi Glaug sprue is the exception to the "one mecha design per sprue" rule. Instead, the Glaug sprue also includes a Regult recon pod. Both models include quite a few small detail parts for antennae and secondary guns. 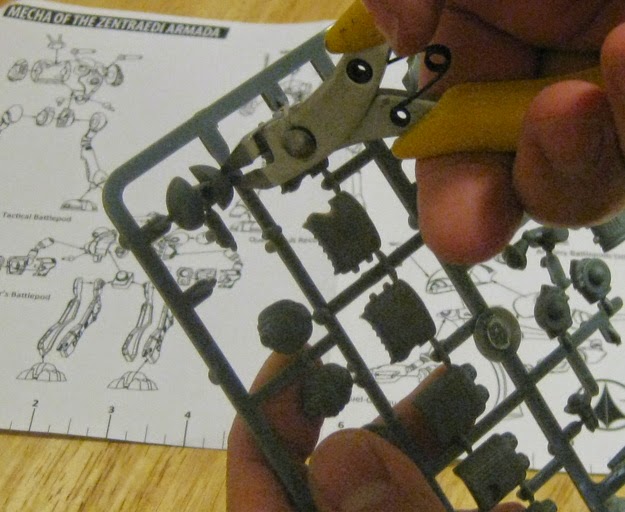 I picked out a Regult artillery pod for my first build. It's possible that I did it because Regults are cool, and Regults with giant artillery rockets are even cooler. Of course, it's also possible that it was because this was the one sprue in the whole shipment where a part had broken free and was already rattling around loose in the bag, waiting to be lost. 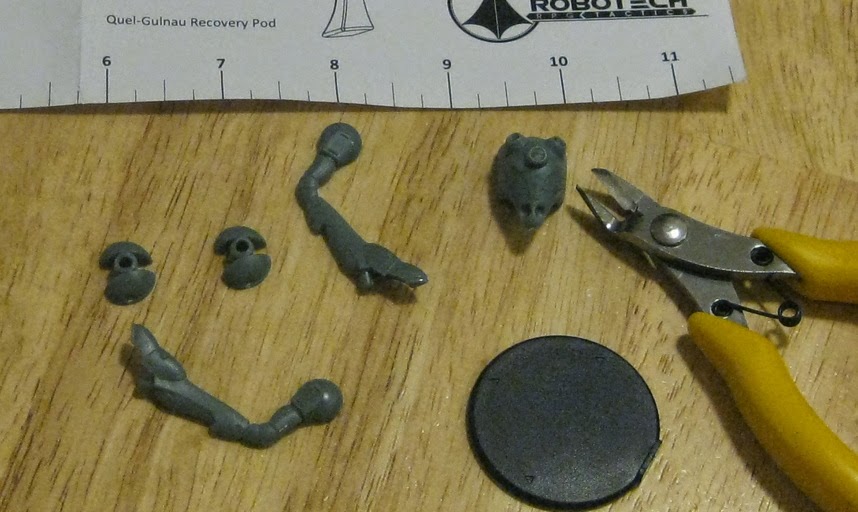 Clipping Regult parts from their frames wasn't too hard. With the notable exception of its gun barrels,  the little bugger's parts were all big enough and robust enough to easily identify and clip free. A few strokes from a hobby knife was enough to clean up the attachment points, but I had to go back with a needle file to work on the faint, but visible mold lines later, especially on the legs. 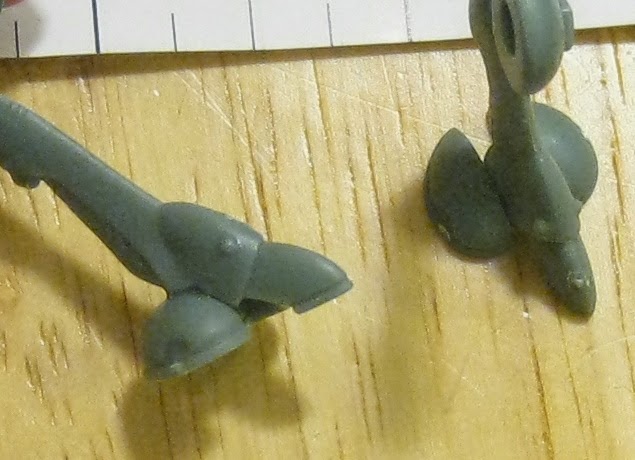 It took a little playing around with the parts to figure out how to orient the back of the Regult's foot. The instruction diagram does not really make it obvious, but, thankfully, it fits much better one way than the other. 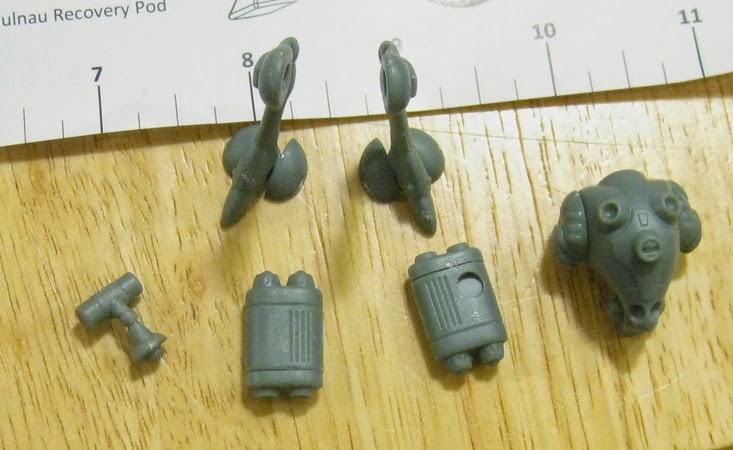 Here you see the major subassemblies ready to go. Each missile pod is 3 parts, each foot 2. The body is composed of 6, including the hip joint. It is also worth noting that I added some epoxy and a brass pin to the joint between the hip and the main body. It looked a little weak for a major structural joint to me. 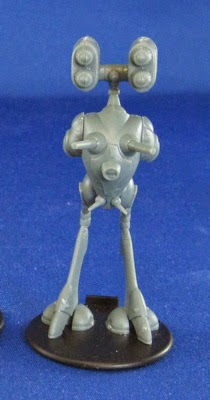 ...and here you see the whole artillery pod, stuck together mostly with plastic cement. By miniatures standards, it's a pretty big model. I believe the round bases supplied are 40mm across, which should give you some idea of the scale.

Including models for all three possible modes of variable mecha was pretty much mandatory for this project. Here you see the three modes [Battloid, Guardian and Fighter] of VF-1J that I have assembled. It is worth noting that, as written, the rules require you to have all three modes available for each valkyrie in your force. It will look spectacular, when done right, but it will require a tremendous amount of modeling and painting to get a substantial UEDF force on the table. 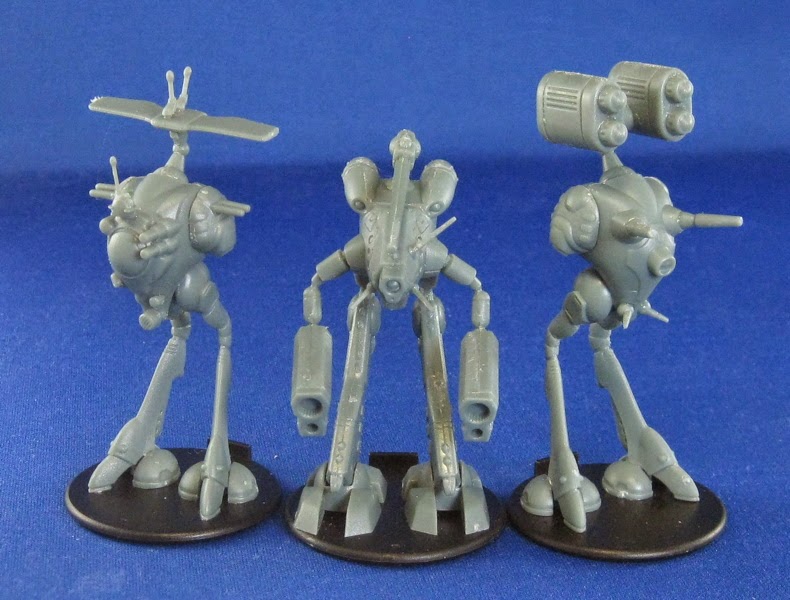 Here you see an assortment of single-mode Zentraedi mecha. The Regult and the Glaug both went together quite easily, and required only minimal fiddling to make them hold together nicely. The scout/EW pod on the left was another matter entirely. Of all the models I have assembled, it is the only one which had parts that simply didn't fit in place correctly. I eventually had to give up on one of its antennae and simply stick it in place with superglue and green stuff. 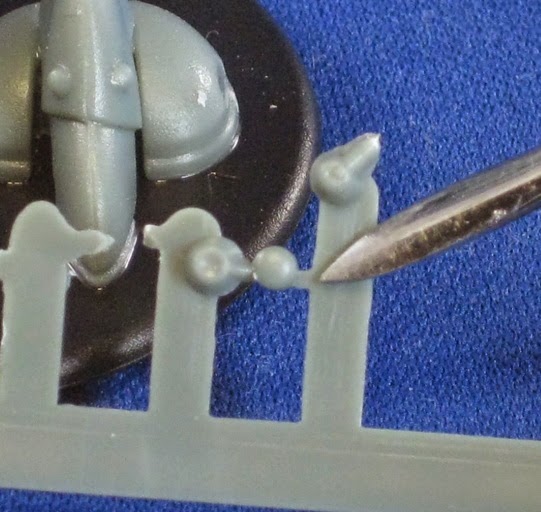 To illustrate my point about the scout Regult, I includes this shot of one of its microscopic parts. That tiny little blob glues to the front of the Regult to form a little spot light or sensor on the left side of the pod. It is not the smallest part on the model. I can't help but feel that some of the sculptors zealous adherence to source material could have been compromised to make assembly a little easier in these cases - the smallest piece snapped when I tried to cut it from the sprue, and had to be left out entirely! 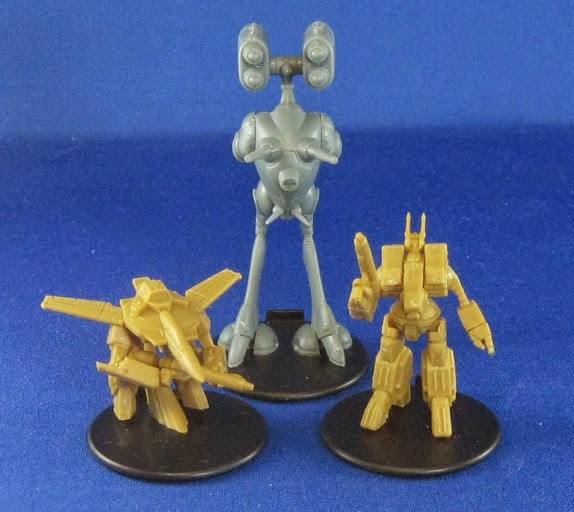 Everything is stated to be in 1:285 scale, based on official Robotech sizes. These figures seem about right, based on the Macross animation. The Zentraedi mecha in the core box are much larger than their UEDF counterparts across the board.

I am certain that I was not alone in wondering how the Robotech minis would scale against the existing line of Battletech miniatures. This shot should give you some idea of how they stack up against each other. The valkyries seem to be similar in size to the Battletech miniatures, although they might be too big to really represent the light 'mechs that share their appearances.

The Zentraedi are pretty much universally too big to fit in nicely with Battletech, but might fit in with the 10mm Mechwarrior line from Wizkids. The destroids, such as the Spartan shown here, tend to be slightly small, but not beyond reason.

I will, once again, leave out the game rules. I have skimmed the rulebook, and I think there is a game worth reviewing there, but I need to paint up a few models and play once or twice to give it a fair shake. Everything else will be model-driven.

Mold lines on these minis are faint, and I did not find a single casting flaw in any of the miniatures that I assembled, so I rate the casting quality high. I dinged them a point on detail because, while complete and faithful, the details are appreciably softer in this material than the equivalent details in other contemporary mecha miniatures cast in other media.

These kits sit in a strange half-way zone in between classical scale models and miniatures. The myriad tiny parts feel, to me, more like the super-detailed and real-world-accurate parts found in a faithful scale replica, rather than the made-for-modelling design of a gaming miniature. This is both good and bad.

The good is that it makes these models very faithful to the source, and very nice to look at once properly assembled and painted.

The bad is that I think a lot of them are simply too much work to be practical models for a game that can easily call for 40, or more, figures per side in a game.
Posted by klarg1 at 6:00 AM