Clearing Out the Backlog

In the past few weeks, I have been devoting some time to clearing out some of my backlog of gaming miniatures, rather than making progress on show pieces or long-running projects. Part of that has been playing with my new Robotech miniatures (review coming next week), but by far the largest share has been devoted to painting up my Directorate fleet for Firestorm Armada. 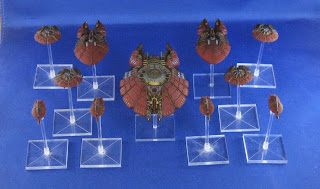 I still have a dozen or more ships to go before the fleet is really ready to hit the table, but I am quite pleased to have made progress. It has been a long time since I tried to paint a whole army, in the classical war gaming sense. I honestly wasn't sure if I still could. 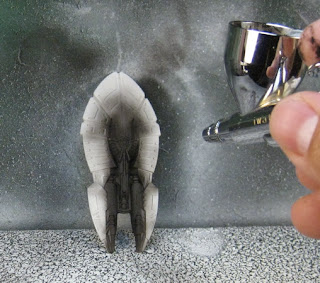 My first experiment was to break out my airbrush to pre-shade a sample cruiser with black and white paint before applying a top-coat of deep red paint to cover the ship's armor plating. I used that ship to play around with color a little bit, but, eventually, I settled on the red, deep brown and bronze color scheme shown on the Battleship I posted in October. 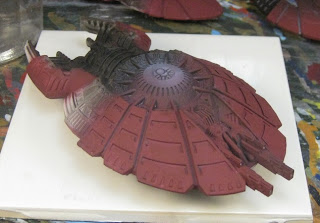 Sadly, I don't have any good pictures of the later stages of painting the cruiser. From here on out, I will walk through the process using the battleship shown last month and at the center of the fleet group picture. 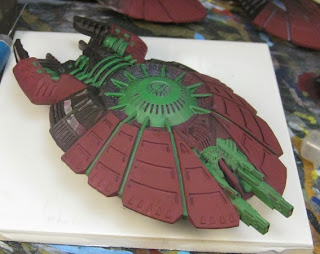 Following the same principles that I applied in my work with metallic paints last spring, I base-coated all of the intended metallic portions of the ship with flat green color. My plan was to preserve a slight greenish cast to the bronze paint that was to follow. 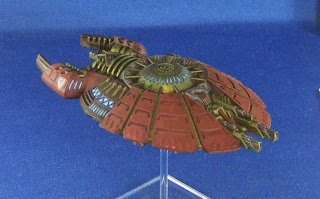 Once the bronze was in place, I gave it a gentle shading with a deep brown ink to reduce its brightness and deepen some of the shadowed areas. I did not attempt to shade things perfectly. At the end of the day, these pieces are intended for gaming more than display.

As you can see, I also painted the windows, engines and other glowing parts with a mix of light and dark blues to bring out some details and contrast across the model. 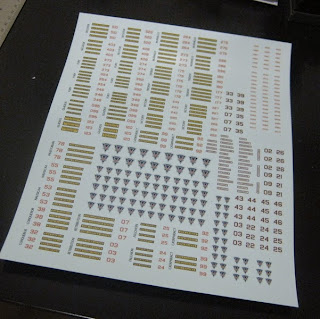 You might note that the larger capital ships in my fleet also sport Directorate triad insignia along their aft armor plating. I did not attempt to free-hand those designs in place. Instead, I downloaded the logo from the Spartan Games website and added them to a decal sheet that I was already printing for future work on my Dindrenzi fleet. The resulting decals were pretty rough, due to graphical scaling issues, but I was able to clean them up with a top-layer of paint. They are far from perfect, but they look pretty decent.

As you can see, I still have plenty more models to work on. What you see here is just the set of ships that I have already pre-shaded (and subsequently airbrushed with red paint). I also have a host of ships sitting patiently in their original packaging, waiting for me to clear out even more space on the work bench.

We'll see how far I can get before something new and shiny distracts me from this task.