Brian, from Magnetized to Lead, has lately been pushing Dropzone Commander, by Hawk Wargames. Being local, and having enjoyed a demo game at GenCon '14, I decided to pick up a few models and see what it was like. 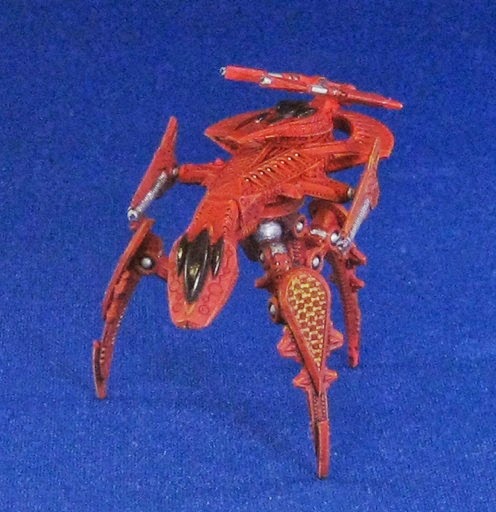 My first experiment is with a Shaltari Jaguar Warstrider. For 10mm scale, it's quite a beast. Fully assembled, it stands almost 2.5" tall, giving most 6mm scale Battlemechs a run for their money.

Warstriders are signature models for the Shaltari. Other armies feature more conventional sci-fi armor, bio-organic technology or anime-inspired hardware. The overall effect provides quite a lot of variety for the game. 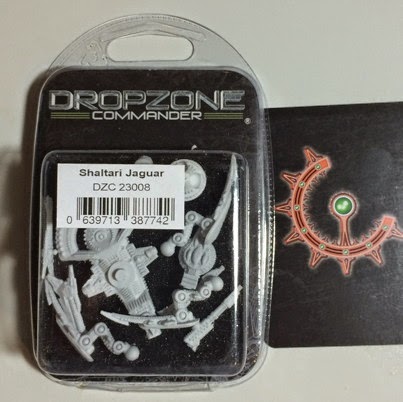 The Warstrider comes in 10 resin parts, which comprise three major sub-assemblies: The leg and hip joint, the main body and guns, and the upper anti-aircraft turret. Based on the shape and intricate parts, I strongly recommend painting those three separately. 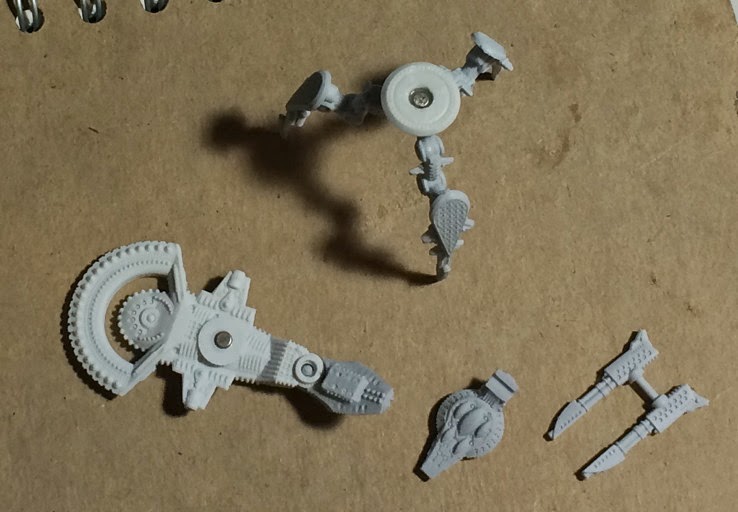 Also, based partly on peer pressure, I took it upon myself to magnetize the joints between those three major assemblies, so that they can rotate freely in a game, and so that I can break the model down into more manageable pieces for transportation and storage. The magnets I used are 3mm rare earth magnets, but 4mm would have fit the opening better, if I had had one handy. 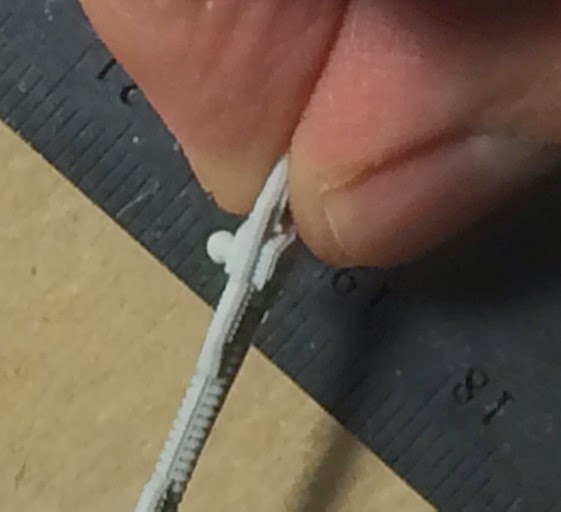 I have to say that, if this piece is representative, Hawk's resin parts are some of the most finely cast I have seen. The details are miniscule, and they seem willing to cast resin parts that are much smaller than many I have seen from other manufacturers. For all that, they seem reasonably tough, for resin. 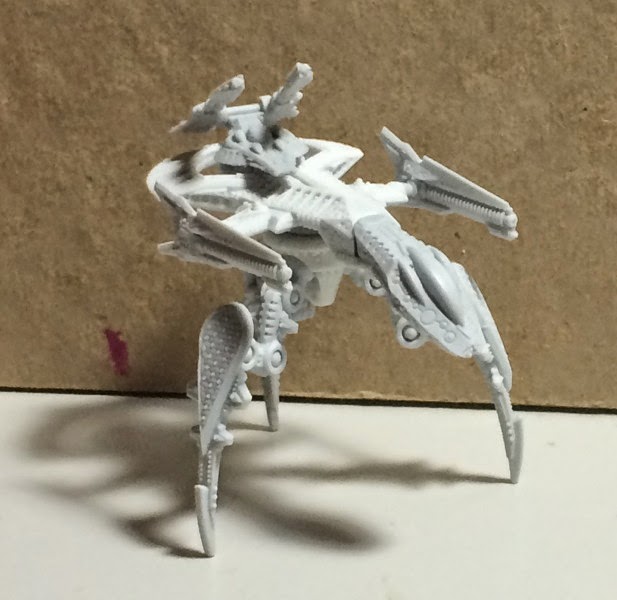 Fully assembled, it's an attractive model. There were a few surface bubbles in the resin, but not too many. The mold lines were where you might expect, and required some cleanup, but, at this scale, they are small enough that a little scraping with a sharp blade can handle most of them. 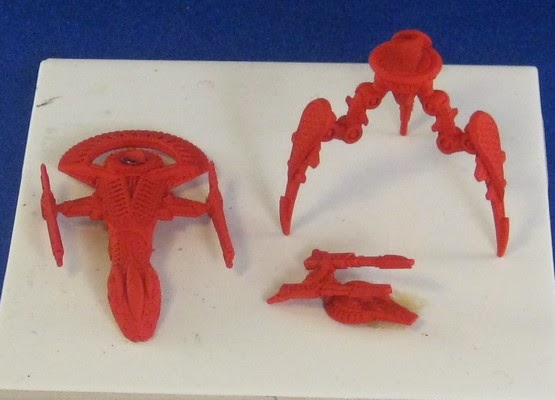 For Dropzone, much like Firestorm Armada, I am looking for an appealing tabletop level of paint. If I am contemplating an entire army of these miniatures, I am going to need to be able to crank out 20 or more models in a reasonable amount of time. With that aim in mind, I once again broke out my airbrush and began a fast base coat. 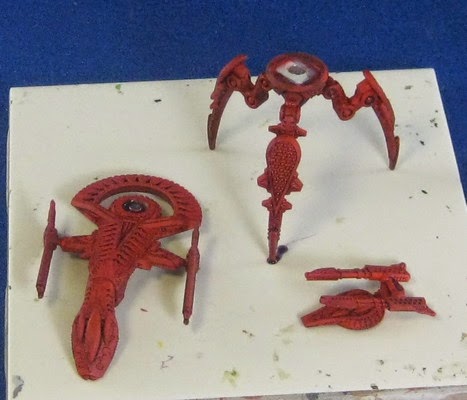 I applied a deep purple wash to bring out the shadows. The cooler tone should make them stand out even more in comparison to the bright red foreground. I also sprayed a darker red color to the underside of the model to provide a basic level of shading between the upper and lower surfaces. 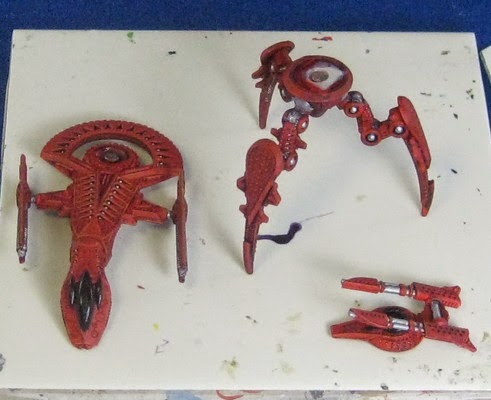 I used bright chrome metallic paint to pick out the joints and weapon barrels. I also painted the cockpit sensor domes a deep blue-black. As a last step, I took a very bright orange-red and used it to apply thin edge highlights to the whole model. 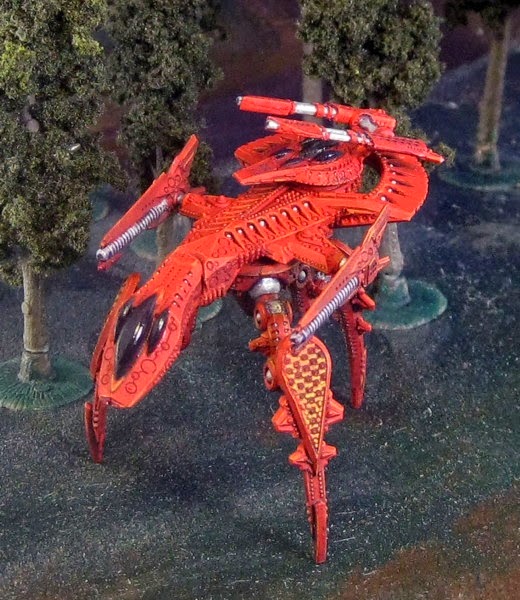 I think this model looks pretty cool, and really calls out for bright, bold colors. I am tempted to try alternative paint schemes using blue, purple or green, but I'm not sure I'm prepared to keep buying these things. I may just have to stick with what I have to build a small skirmish army - The rules look pretty interesting, and my demo game was fun, but I'll need to have to try out a full game for myself before I can really comment with any confidence.
Posted by klarg1 at 7:00 AM