Starting in 2015, I am working with Brian, from Magnetized to Lead, to produce a series of battle reports, and other commentary for miniatures games. In honor of the impending release of Spartan Games "Return of the Overseers" box set for Firestorm Armada, we inaugurated this effort with that game*. I now bring you my thoughts on our battle of Aquans vs. Directorate.

Our eventual hope is to record these reports. As a first, tiny step, I have edited together a set of slides to document our game. Once you're done here, head on over to Brian's blog and read his thoughts on the battle to get the most rounded perspective possible. 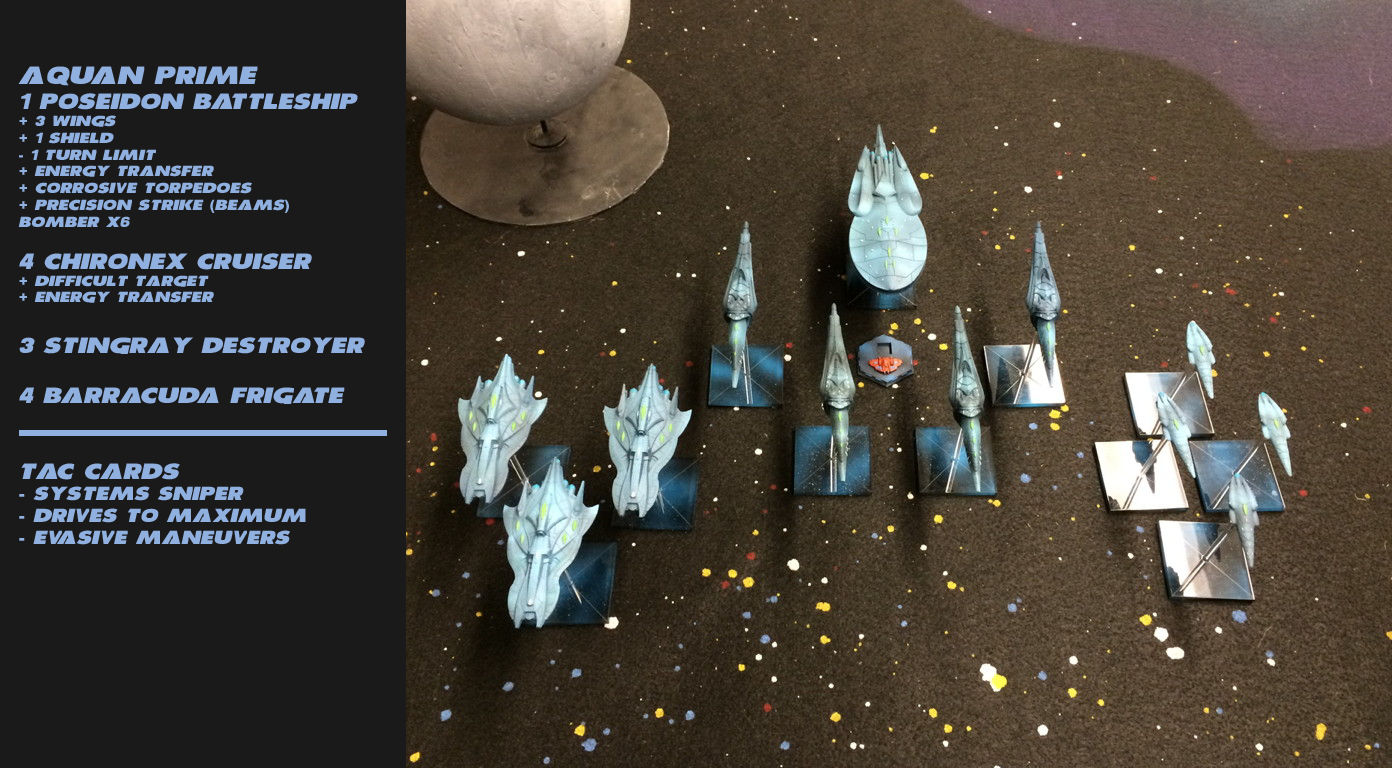 Up first is Brian's Aquan fleet. We set the game at 800 points to keep things small and manageable for our inaugural report. Brian's list is pretty traditional for him. I knew the stingray destroyers were one of his favorite squadrons, and was not surprised to see them. They have excellent ranged firepower, and are difficult to hurt early in the game due to the stealth systems special rule (MAR). A full squadron of Chironex cruisers provided him with a very mobile core squadron with adequate, if uninspired firepower. Brian wisely chose to buy the difficult target upgrade for them, making them much tougher to destroy. Brian rounded his fleet out with a Poseidon class admiral-mobile, and a mandatory squadron of frigates. 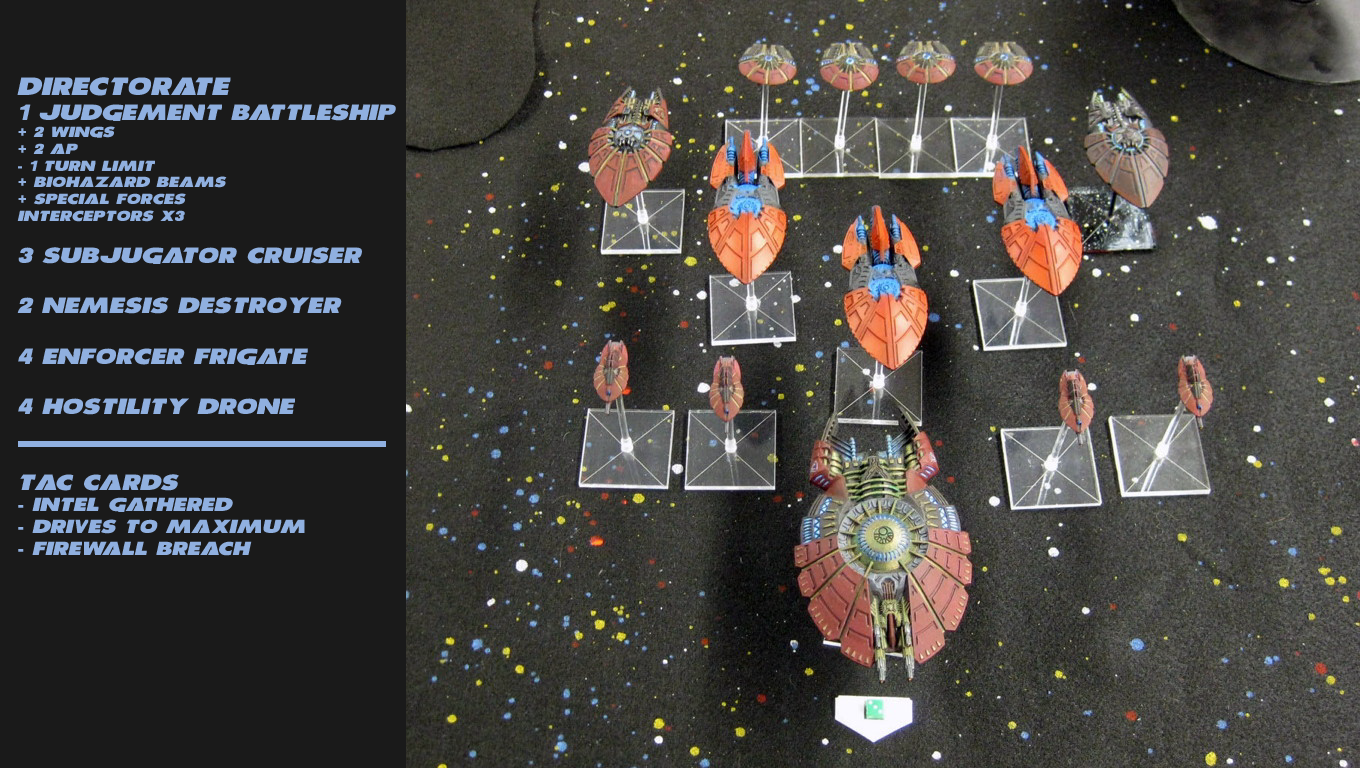 My own fleet was centered on a squadron of Directorate Subjugator class heavy cruisers. Brian and I have both experimented with this squadron choice, and it has proven itself to be an extremely effective choice. The ship comes with a cloaking device to keep it safe in the early phases of the game,  while it is closing in. Once it reaches its target, it packs a strong mid-range gunrack to soften up its targets. Finally, the squadron can mount one of the most powerful boarding assaults in the game, readily capturing carriers and battleships whose crews have been weakened by biohazard and assault robot attacks. At this point level, the cruisers count as tier one, rather than tier 2, so I added a cheap, but useful destroyer squadron to my fleet. I also added in a squadron of hostility class drones to add some crew-killing ability to my fleet.

With that core fleet in place, I considered two options to round out my fleet. One was to add a carrier squadron, along with a pair of Tormentor class R&D cruisers as accompaniment. The second was to include a battleship along with a second squadron of small ships to add firepower and give me an extra activation each turn. As you can see, I chose the battleship in the end. I will admit that a big part of my decision pure contrariness, based on the sheer hate the ship gets in online forums. I have used the carrier squadron before, and it is quite effective, but I wanted to try to get my poor old Judgement a chance to shine.

Sadly, as will be shown in the rest of the report, it did not acquit itself as well as I might have wished. 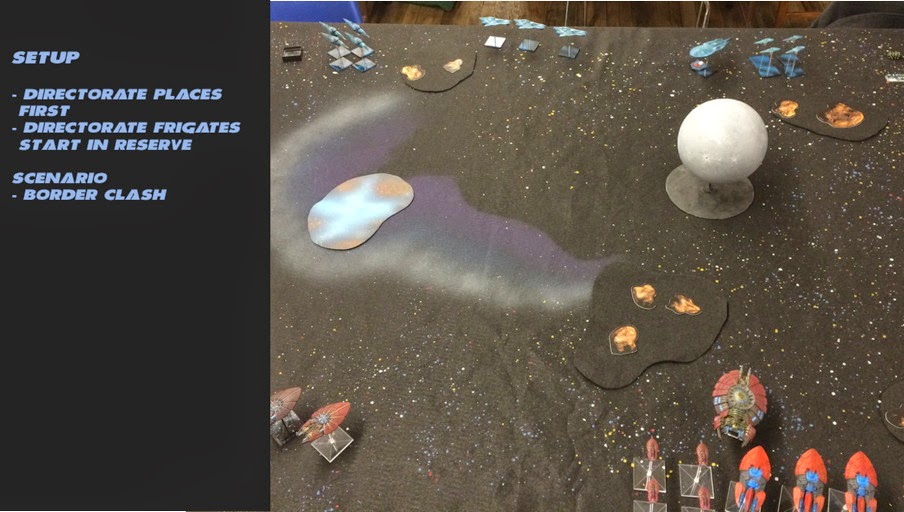 I lost the roll-off for setup, and had to commit the first placement to the table. My one consolation is that I had more total placements than my opponent did, so I was still able to place my heavy cruisers last.

As is commonly the case, both players held out on committing their most important squadrons until the end. Starting out, I stalled for time by placing my frigate squadron in reserve.Brian naturally countered with his own, largely disposable, frigate squadron. Along the way, I placed my battleship and drone squadron behind some asteroids to give them some cover from Brian's destroyers and cruisers, which he had placed across the table. Using my last placement, I was able to concentrate my forces on my right flank, with both of my tier 1 squadrons right next to each other, facing off against Brian's battleship and frigates in the early game. 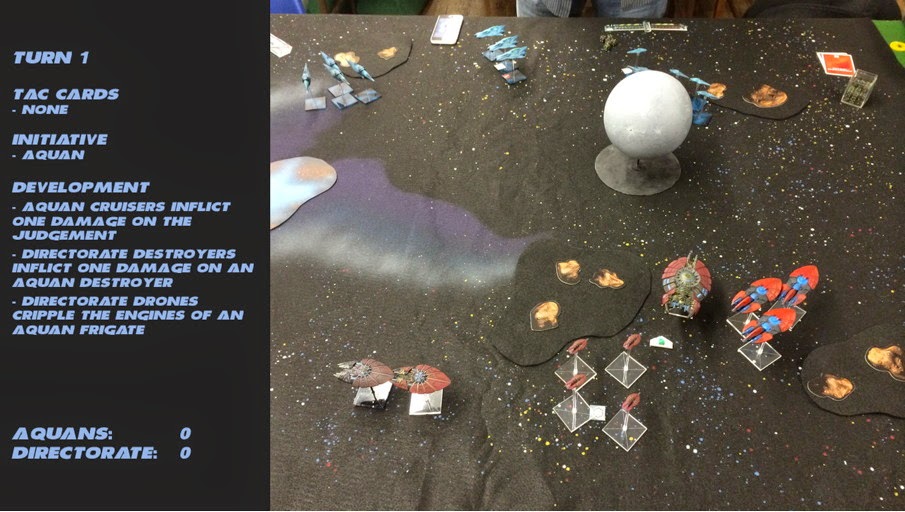 During the first turn, I moved my fleet forward along the avenue created by the asteroid fields and planetoid on the table. I had my destroyers skirt the table edge, sniping at their fishy counterparts along the way. I did not want to let the Aquan cruisers get the drop on them and take them apart in isolation. I realized too late that I moved my battle ship a bit too far forward in the first movement, exposing it to some sniping from the Aquan destroyer squadron. It only cost me one point of hull damage, but it was unnecessary - I should have waited.

I was surprised to see Brian turn his battleship in to meet my fleet head-on. I had actually been expecting him to sling around the other side of the planetoid to link up with the rest of his fleet before meeting me. It actually fit my game plan of trying to limit the effectiveness of his tier 2 squadrons with terrain while my concentrated forces attacked his flagship. 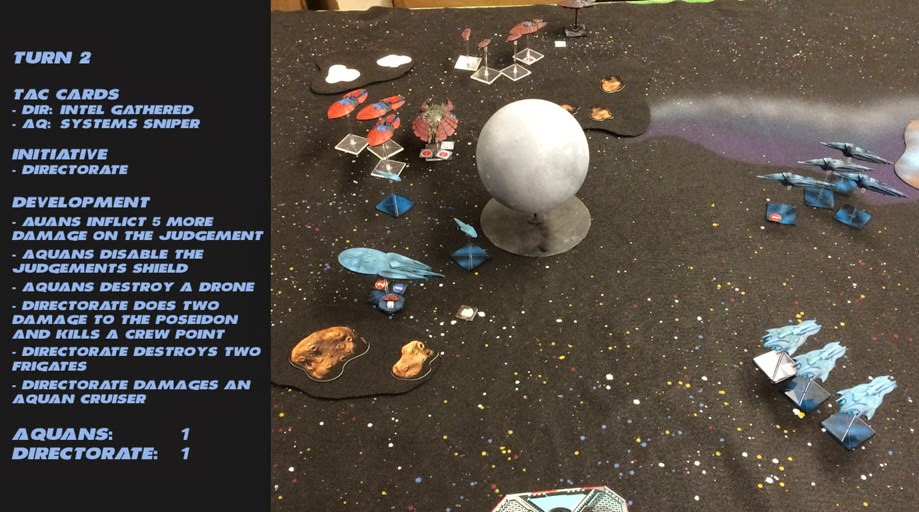 Turn 2 started quite well. I played the intel gathered TAC to gain the initiative, and it worked. In a 1 in 1296 fluke, both of us rolled box cars on our initiative dice, and my temporarily boosted bonus carried me just over the top.

Based on positioning from previous turns, my battleship was forced to cross the gulf between terrain pieces, exposing it to a lot more fire. I was unable to line up its primary armament on the enemy battleship. This was partly due to the ship's low speed and poor firing arc, but also partly due to my bad positioning from turn one. I couldn't afford to let the ship sit exposed to enemy fire while I waited for the Poseidon to present itself as a target. Brian seized the opportunity to move his cruiser squadron into range after I moved, and poured fire into the ship. The net effect was a rather sorry showing for the Judgement, even giving its less than impressive stats. By the end of the turn, the ship was more than half destroyed, pretty much ending its threat for the game.

I wound up scattering a bit of damage around the enemy fleet, including two points of hull damage on their flagship, which was good, but could have been better. 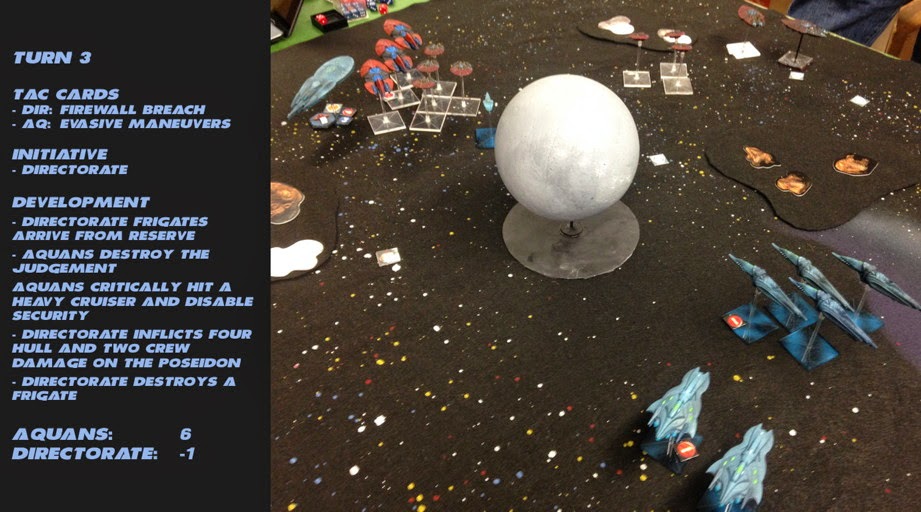 I think turn 3 was a major turning point in our game. In spite of the fairly even battle log score at the end, I believe this is where Brian took the upper hand.

I used the Firewall Breach TAC to disable the engines on Brian's battleship, forcing it to drift forward and present me with an easy target. My frigate squadron also decided to take this perfect opportunity to arrive on the board via flanking maneuver to boost my available firepower and support my push.

Once activations began, I shuffled my struggling flagship forward in an effort to eke out some firepower before the Aquans finished her off. Her final act was to board and destroy one of the two last Aquan frigates. My plan was to follow up with my heavy cruisers to board and capture the damaged, and partially de-crewed Poseidon, but Brian's first activation resulted in a critical hit, disabling security on one of them, preventing it from boarding. Realizing that they would no longer have the forces necessary to reliably capture the target in time, I was forced to settle for damaging the ship and waiting for turn 4 to finish the job.

For his part, Brian finished off the flaming wreck that was once my battleship with a combination of guns and bomber wings. After that, the lone frigate he sent in to trigger my mine and open up a corridor for his cruisers to advance had the poor taste to survive its "suicide" run. The one saving grace for me was that his every effort to finish off my small ship squadrons and score a few more battle log points met with continual failure, due solely to poor die rolling.

I knew the battle log would shift back to a more even footing when I "inevitably" captured his admiral's vessel in return, but things were not looking good. 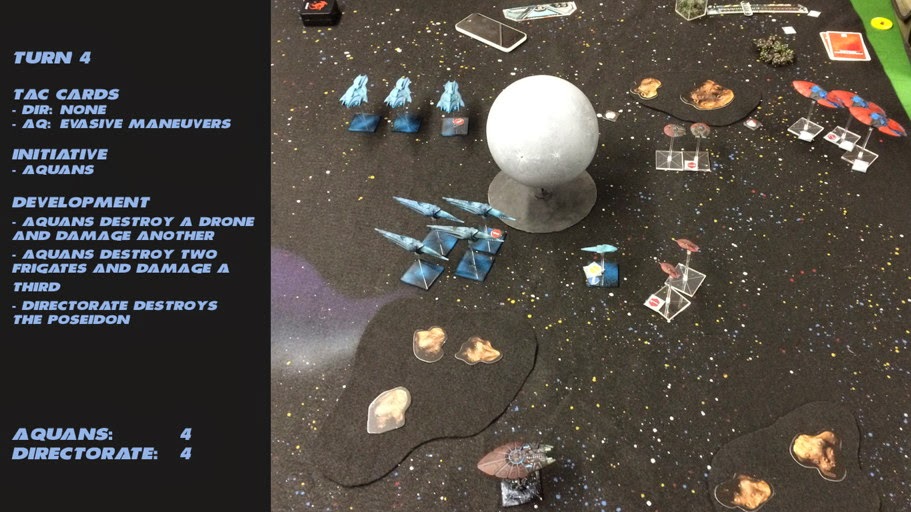 What did I say about poor die rolls? It seems these things cut both ways. My heavy cruiser managed to sort out it's security problems between turns, restoring my boarding potential to full capacity. In spite of Brian's best efforts to squirm out of it, I was able to come about for another pass, and, this time, board his ship at full strength... only to fail at scuttling the ship, leaving it horrendously crippled, but not destroyed. Fittingly, the cruisers ended their turn cloaked to hide their shame. I had to fall back on guns from my remaining ships to put the thrice damned thing out of its misery and reclaim my place on the battle log.

The good news for this turn was twofold. First, my insistence on hiding behind the central planetoid left Brian's destroyers with no useful targets during the turn, and, second, he still could not buy a die roll to finish off my small ship squadrons. All he managed to do was gun down two of my frigates, leaving me with two half-strength squadrons. 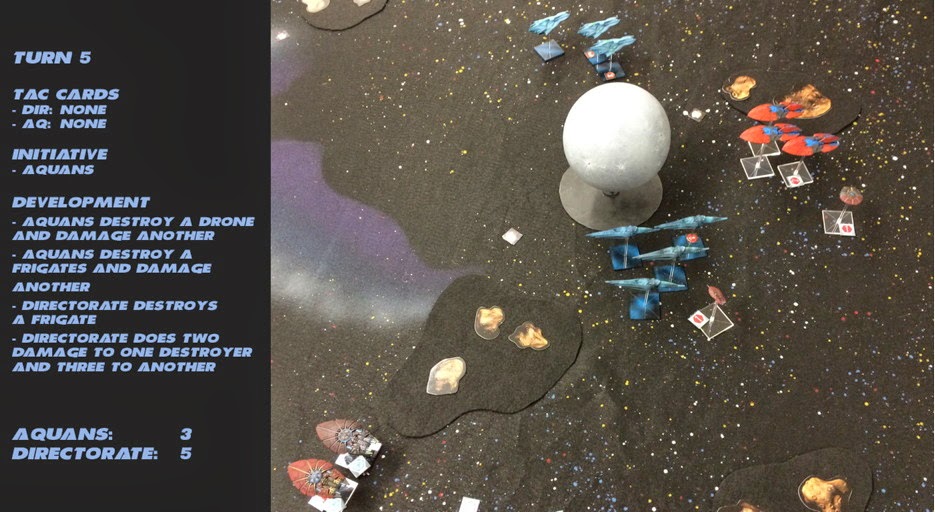 Knowing that the store was closing, I played a hail-Mary play to try and score a decisive win. I delayed the activation of my heavy cruisers until after my small ships went, finishing off his last frigate, and forcing him to activate his cruisers while mine were still under cloak. I was then able to decloak, running them through an asteroid field to get a shot at Brian's nearly intact destroyers, following up with another volley from my own destroyers. If I could kill two of them, I would score two battle log points, and luck my way into clear victory.

The odds were against me, but I came close. I managed to inflict a total of five damage points, leaving two cruisers 3/4 destroyed, but none dead. The resulting score was, effectively, a draw, and should probably have been even closer, if Brian could have finished off either of my last two small ships.

I think we played a good game, and, while I can see some mistakes that I would prefer to have avoided, I think it played out in a pretty balanced manner. I would probably redesign my fleet if I were to play it again, but the Directorate are definitely a fun and effective fleet to use.

* - Definitely in honor of the release, and certainly not because I don't have enough Dropzone Commander models painted to try out that game.
Posted by klarg1 at 11:12 PM