I started this Blog with a long-running project to build my first Firestorm Armada model. It was a Dindrenzi Battleship, which I painted up in a rather dour black-green and red paint scheme. Since then, I have experimented with a variety of variations and alternate designs, none of which have quite satisfied me. I thought I'd share some of my experiments, and the process as the most recent entry into how I experiment with war gaming fleet or army design. 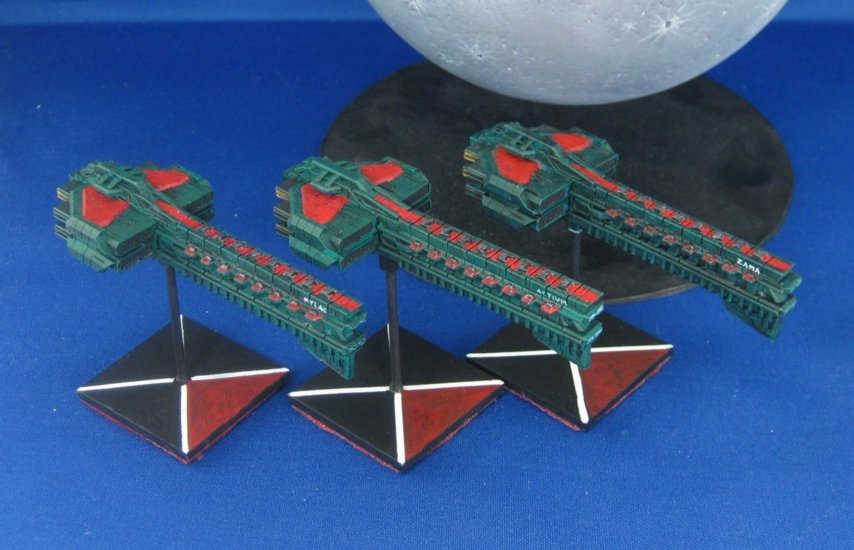 Of course, it is not good enough for a color scheme to look good on the table. Whatever I choose has to be repeated across a couple of dozen models, some of them quite large. To make that practical, I need to pick something I can repeat in reasonable time, using the skills available to me. This means no deep shading, blending is allowed.

My first attempt, back in 2012, was a dark green, further darkened by a black ink, applied across the model. I accented the ships with deep metallic engine parts and red markings, but the overall effect tended to be pretty well lost on the table. The other problem I ran into was that it didn't really look right unless I hand-highlighted the dozens (or hundreds) of individual armor plates on each model, which also made it painfully time consuming to implement. Even though I managed to paint up a serviceable 800 point fleet in these colors, it had to go! 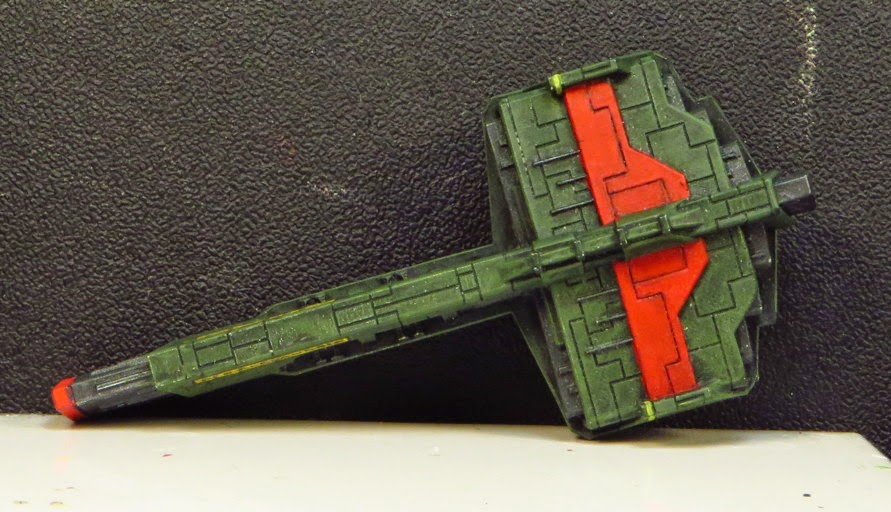 A year ago, I revised the scheme in an effort to keep the basic look, but to speed things up by replacing panel highlighting with simpler, and faster, dry brushing. I have to say that this paint scheme really isn't bad, it's just a bit more "army green" and basic than I might have preferred. At this stage, it is still in the running for my final pick, once I'm done experimenting. 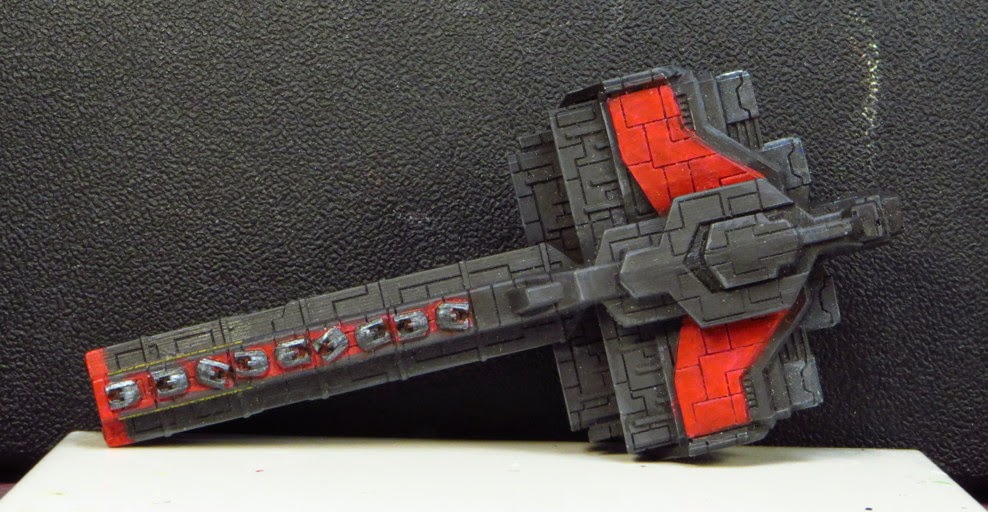 Even more recently, I started experimenting with schemes that were designed more along the black and red patter, rather than green and red. Part of the idea was to return to a darker overall look, and part was to paint something that would pair well with the white and red paint scheme I chose for my Rense fleet, which functions as a special forces elite for the Dindrenzi Federation. I still like the inverse paint idea, but this particular implementation was simply too dark. When I placed it on a table, on a black star field, under poor game store illumination, the ship simply vanished. 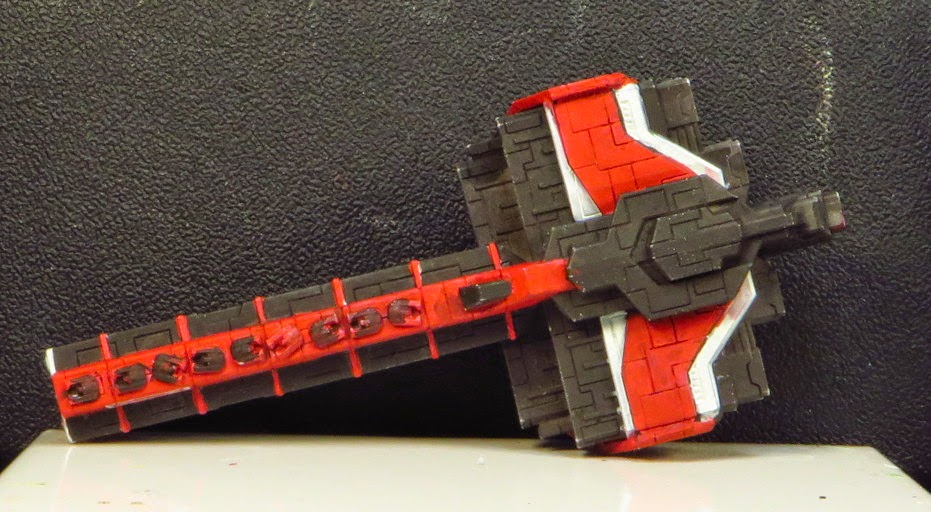 Now I am playing around with variations on the black and red theme, including the possible addition of white edge details or trim. None of these experimental ships are completed, so none of them have top highlights, squadron markings or other finery, but they do get the basic point across. 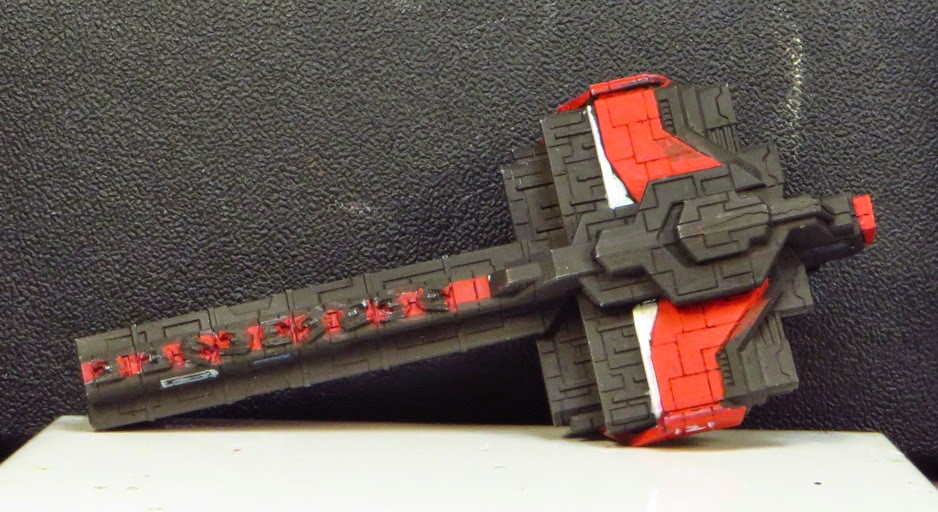 As I experiment, I am slowly reaching the conclusion that I don't much care for the white, or, at least, that it needs to be used very sparingly. Right now, the experimental ships all use it in place of the previous yellow for their name plates and hull numbers, but that may yet change. 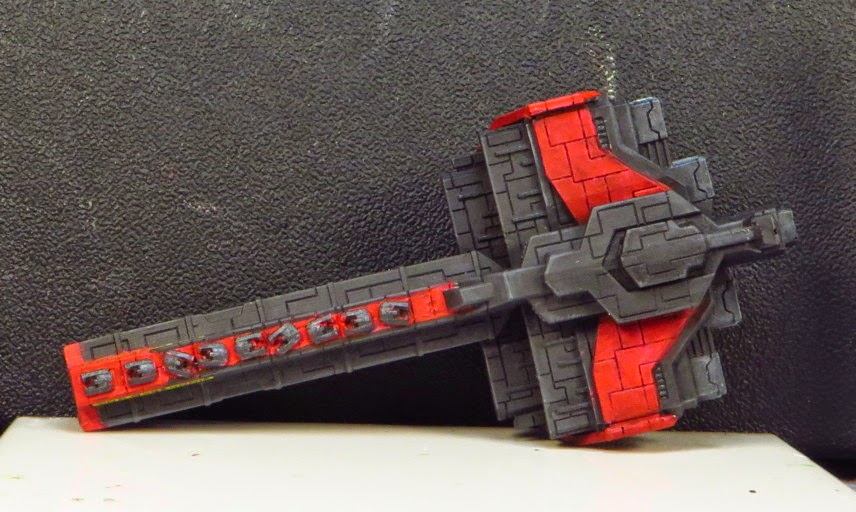 So far, the yellow labels and lack of trim looks best to me. On the other hand, I very much like the expanded red markings and brighter banding. I am still tempted by the idea of ivory or white clored name plates and hull numbers, but, so far, this is the winner. My next experiment will be with brighter edge highlighting that will bring out the shape and details of the model a bit better to make the existing colors "pop" better.
Posted by klarg1 at 6:00 AM