First Look at the Dindrenzi Battleship

I Managed to get in a test game of Firestorm Armada last weekend, and I received my Battleship model in the mail, so I've been playing around with that too. I'm going to hold off on sharing my thoughts on the game until I've had a chance to mull it over and write a more thorough review, but I thought I'd share my initial impressions of the Battleship model now.

First off, I'll say that this thing is huge. I have toyed with the idea of building scale models a few times, but nearly all of my real experience has been with gaming miniatures. At around 17cm (about 6.5 inches) long the Dindrenzi BB is pushing the boundary between the two. It's going to be a challenging build, but will look very impressive on the gaming table. Battleships are the biggest models included in the race starter boxes, and this one, at least, seems to be the most complex by far of the initial release of Dindrenzi models. They have since released an even bigger dreadnought model, but I haven't seen it in person for comparison.

The complexity of the kit is likely to be a bit daunting for a  beginning modeler. The ship comes in nine parts, not including the base: 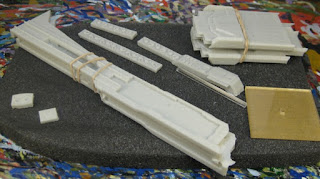 I'm no expert in resin, but the casting appears to be crisp and well done. I didn't find any voids, and there aren't very many bubbles in the resin. As you can see, the big pieces were bound together with elastic to keep them from bouncing around. There was some flash on most of the parts, but nothing serious.

There is an odd texture molded into the large pieces. I couldn't get a clear picture of it, but there are very fine ridges forming parallel lines on all of the flat surfaces. They are quite shallow, much smaller than the engraved panel lines and other details, but they are definitely there. It is definitely a drawback, but not a major one. It will make washes or dry brushing a bit trickier, since you won't want to emphasize it.

Fit is challenging. The "gun decks" which sit along the ship's spine are too wide to fit into the spaces left for them on the hull, when the two halves are put together: 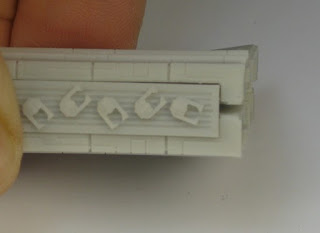 At first, I thought I had miscast parts, or that I was missing a piece, but, after perusing the Spartan Games Forums, it looks like that gap may be intentional. The art for the ship does show a 'groove' in the hull along the center line, but it would be nice to have a part which fits in the center of the ship  as a spacer, and to prevent light from showing clean through the model.

I don't have a rating system worked out yet, but I would sum up this ship this way:

I love the design. Spartan Games has some great artists working on their designs, and they produce some beautiful models. I am enamored of the look of the Dindrenzi fleet, and I am very likely to buy more of it for myself. I am disappointed with the extraneous texture on the casting and with the needlessly complex assembly requirement. I would highly recommend it for an experienced modeler who wants a new game, or just some cool looking space ships. Novices that love Firestorm Armada might want to look for an appropriate proxy until they get some more experience, or try a different fleet. Several of the other Firestorm races look like they might be easier to assemble.

I'll post some pictures of my progress building this beast later.
Posted by klarg1 at 9:12 PM