After posting my recent review of Dropzone Commander, by Hawk Games, I thought it might be a good idea to write up my painting experience with the Shaltari and UCM armies. 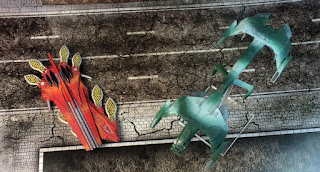 The two are an exercise in contrasts. One shows the bold colors of an alien military, unconcerned about hiding their position, while the other is a more traditional military force, emphasizing pragmatism over style. 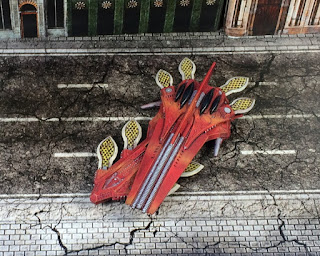 Like the studio army, my Shaltari sport a bright, primary color scheme that leaps out on the battle field and announces their presence. Designing this scheme was a lot like working with parade livery for Battletech miniatures in the past, and makes for a striking army on the table top. 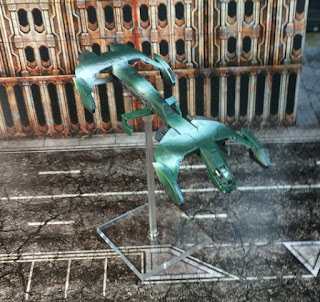 The UCM, on the other hand, present the image of a conventional, modern, army. I felt that they should be painted in a plausible military camouflage scheme. Going in, I knew that camo often looks very nice in a sterile photo studio, but, by design, it breaks up the silhouette of each model, and robs them of a lot of their table top presence. Worse, it can make your whole army simply dissolve into the background, when you really want it to stand out boldly.

Both armies began with basic white primer, followed by an airbrushed coat of Vallejo Model Air Black paint along the bottom of each model. The black paint pre-shades the undersides. The result is that the base colors of the model will be brighter on the top than on the bottom, providing some basic highlight and shadow effect, even in a simplified, table top paint job. 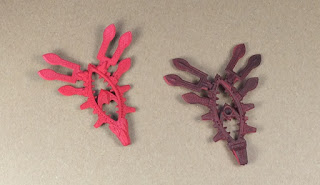 As with my previous post on painting the Shaltari, each model then gets its base color. I still use red for the Shaltari, and I selected a light grey for the UCM vehicles. In the photo, you can see how different the same red shade looks, depending on whether it was sprayed over white (left), or black (right). 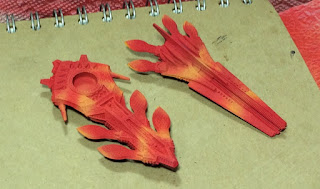 Partly because it is easy to do with an airbrush, and, partly, because it looks good on military vehicles, both of these paint jobs incorporate broad stripes of a secondary color into the airbrushed base coat. My current Shaltari scheme makes use of a bright yellow-gold to provide some color variation against the unrelenting red background.

For the UCM camouflage, I picked a deep pine green that works well for an alpine look, but that will (hopefully) still stand out a bit from the greys of the cityscapes that dominate Dropzone Commander games. 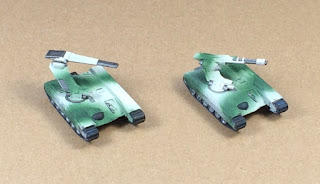 Once the base coats are done, I embark on the slow process of detailing each mini. I always start out looking for the easiest possible route to get table-top ready. I also invariably get drawn into further and further detailing in an effort to make things look better. For the UCM, things are still pretty basic: I painted the exposed machinery, weapons and drive wheels with a medium metallic steel, and picked out the tires, treads and cockpits in a deep blue-black. I might go back and revisit the cockpits later - they seem a bit dull.

At this stage, the only thing I did for the Shaltari was to pick out their myriad tiny details with chrome silver, and paint in their own cockpits / sensors with the same blue-black. The remaining details wait until what comes next: Inking. 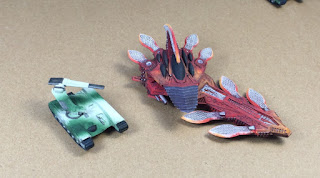 I use inks and washes on both armies, but in subtly different ways. For the Shaltari, I have been applying a deep purple ink to the whole model to dull and tint the colors, and to bring out the recesses and panel details.

For the UCM, I have only been inking the metallic components and treads, in this case with pure black. To preserve the light grey and moderate green tones, I have been directly inking in the panel lines for the non-metallic components with a sharp brush. It takes a little bit longer, but it produces a nice effect. 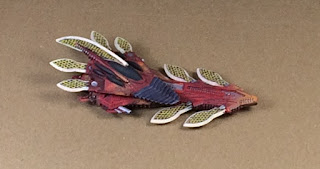 Once the inks and panel lines are done, the UCM await only their final highlight phase. The Shaltari, by contrast get a second pass of detailing. Since my first iteration, I decided that they needed a bit more pop to look properly finished. The result is a far more complex, and detailed paint scheme for the lift vanes surrounding each model. The final result uses a very bright yellow, a very deep red, and a bright ivory color to tie it together. I like the way this scheme brings out the molded details of the lift vanes, but, unfortunately, it does not work quite as nicely on the simplified plastic kits. C'est la vis, I suppose.

The final step for both armies is to apply thin edge highlights to the corners and panel lines to bring out as much detail in each model as possible. For the brightest parts, these highlights are in pure white, but in all cases, the idea is to pick a bright color to bring out the details.

Now I just need to finish up an army's worth of each!
Posted by klarg1 at 8:30 AM